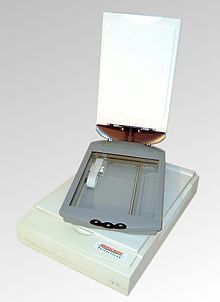 A scanner ( Engl. To scan , scan ') or scanner is a data acquisition device that scans an object on a systematic, regular manner or missing. Scanning is an opto-mechanical process.

The main idea is to use relatively limited measuring instruments to generate an overall picture of the object through a large number of individual measurements .

The scanner records the analog data of the physical original with the help of sensors and then translates them into digital form with A / D converters . So you can z. B. processed, analyzed or visualized with computers .

Russell Kirsch from NBS had developed the digital scanner back in 1957 . The very first image scanned in this way was a baby photo of his newborn son Walden, 176 × 176 pixels.

Three-dimensional templates can only be read in with a 3D scanner . Such devices are mostly used for cataloging or archiving objects. The disadvantage is that the scanning device often has to be permanently mounted or, in the case of hand-held scanners, reference points have to be glued onto the object.

The scanner type is used in the professional and semi-professional area and is offered in two versions: on the one hand as a pure film scanner, in which the slides and negatives are fed into the scanner by means of special devices , and on the other hand as a hybrid device in which a flatbed scanner has a special transparency attachment . For both versions, there are both simple and high-quality devices that differ greatly in terms of pixel density and range of density . The optical resolution of high-quality devices is approx. 3000 ppi to 4000 ppi. They also work with a special lighting process to eliminate the usual scatter and side effects when scanning the highly reflective originals. See also at slide scan . 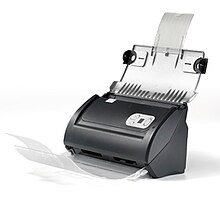 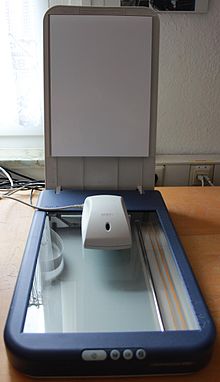 Transparency scanners are used for transparent originals such as films, slides, x-ray images. There are devices with an integrated or external light source.

Each fax machine has a feed scanner for its direction of transmission. A line of light-sensitive CCD sensors (or sensors with a different technology) is built into the device. The template is guided along it. Pure black and white mode is used for faxes, i.e. neither color nor grayscale is recognized.

The feed scanner is constructed in exactly the same way as a fax machine (see above), but nowadays also with gray levels and color recognition. The obvious disadvantage of feeder scanners is that they only process individual documents or stacks of them. Books cannot be scanned. In addition, when feeding smooth originals such as B. Photos, there are unpleasant edge distortions. They are mainly used in the enterprise area as document scanners.

For reading mostly smaller documents (example: forms filled out by hand with a cross), otherwise in technology such as document scanners or feeder scanners.

In contrast to transmitted light flatbed scanners, a film scanner is used for film scanning of photographic material such as film negatives , slides, and cinema films for television and cinema purposes. See also film scanner .

The flatbed scanner , the most common image capture device today, works on the same principle as a copier. The original is placed on a pane of glass, it always remains in the same place, the light-sensitive sensors are guided along under the pane of glass during scanning. This method makes it possible to scan not only photos and images but also bulky documents such as books. In order to achieve a sharp image, the original must lie flat on the glass plate. However, this causes problems with some templates. Inexpensive flatbed scanners can scan documents up to A4 .

With original sizes of more than DIN A2 one speaks of large format scanners, which are offered as draw- through, flatbed or drum scanners. There are two competing systems for swipe scanners, CCD and CIS . CCD works with several small camera sensors (hence the name). Similar to panorama images, the image from the cameras is calculated to form an overall image. The light reflected from the original is bundled on the sensor via mirrors and lenses. CIS (Contact Image Sensor) works with sensor strips on which the light reflected from the original hits directly. Since several sensor strips cover the entire scan width in CIS technology, it is not necessary to bundle the light using lenses and fewer errors occur (no offset between the cameras, minimal distortion and no color fringing). On the other hand, the CIS technology is prone to blurring if the scan template is uneven.

Hand scanner with interface card for the XT bus

As the name suggests, you have to drag the hand scanner over the template by hand. The scanner must not be pulled too quickly over the original (because a certain limit value for the amount of data transferred cannot be exceeded) and no lateral deviations from the straight line should be made, which is due to rollers mounted parallel to the (one-dimensional or linear) scanning line is supported.

First generation devices were inexpensive alternatives to conventional scanners. To scan an A4 page, you have to scan several times and put it together using the software, as the devices are too narrow. In connection with a pulse generator, the role also recorded the distance covered over the template and thus the second dimension. Hand-held scanners were popular in the early to mid-1990s, but have long since disappeared from the market because of their disadvantages and the sharp drop in prices for flatbed scanners.

Today's devices allow entire A4 pages to be scanned with one scanning movement. The possible speed has increased significantly to up to 2 to 4 seconds per side, depending on the color setting. They are battery-operated and save on microSD or send the data to the desired device via Bluetooth or WLAN . One also speaks of mobile (document) scanners , but this also includes small, mobile feed-in scanners ; or compared to these as a distinguishing feature of book scanners , since you can not only process individual sheets. Today they are mostly additional devices for working with them on the go.

In between, hand-held scanners were developed that could scan individual lines and had integrated OCR software. They are also called digital highlighters and are still available. There are similar devices with built-in translation software.

The rotating, horizontally strongly bundling antenna of a panoramic radar is sometimes referred to as a scanner. Together with the display on vector-oriented screens , radar is also one of the imaging processes .

Scanners for applications in photogrammetry such as réseau scanners

There are various scanners in medicine, such as B. 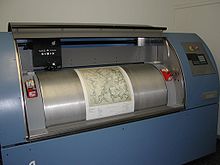 This is one of the oldest types of scanners, but it still delivers the most accurate results today. Resolution (approx. 12,000 ppi), speed and quality remain unmatched by other types of device. The drum scanners from the former world market leader Heidelberger Druckmaschinen can still be used on modern computer systems with the special SilverFast software . With the drum scanner, the original is attached to a rotating drum, which the lighting and scanning system moves linearly past, so that the original is scanned in a helical manner. Since the light source and the scanning system are always in the same position in relation to the paper, excellent quality can be achieved with simple means. In addition, instead of the normal CCD sensors, drum scanners have highly sensitive photomultipliers for reading in the data. The disadvantage is that they cost a lot and are very large. An early application of drum scanners was picture telegraphy .

How a scanner works

Scanners usually work according to the following principle: The original image is illuminated and the reflected light is directed to an optoelectronic line sensor (fast scan ) via a rod lens , which is supposed to bundle the reflected light and eliminate the stray light . The analog light signals are converted pixel by pixel into digital signals by analog-digital conversion , while at the same time either the original or the sensor optics are moved step by step perpendicular to the sensor extension ( slow scan ).

When scanning with an area sensor , the entire original or extensive parts of the original can be scanned at the same time.

By renewed scanning after moving the sensors in the subpixel area , the image resolution and possibly also the photographic resolution can be increased.

Certain color values ​​are determined by separately scanning the primary colors (mostly red, green and blue) using upstream color filters and, if necessary, by software-based, additive color mixing . This filter process requires one scan pass for each primary color if all sensor elements are used for the scan. Alternatively, Bayer sensors or other color sensors are used in which all sensor elements are each provided with a fixed color filter in a specific color sequence. This means that the scan can be carried out in one pass (see also CCD ).

When using several colored and switchable light sources , only one scan is required, as the light sources themselves provide color separation. During a measurement, the sensors only measure the light of a certain wavelength, for example with the illumination by inexpensive light - emitting diodes (see also CIS ). Alternatively, colored light sources with a continuous light spectrum can also be used.

Scan with a white light source

In the prism process, the original is illuminated with white light . The reflected light is guided through a prism that splits the color components. These are recorded by adjacent optical sensors. This technique also only requires one scan.

Depending on the application, the quality of a scanner depends on:

The quality of scanners can often by means of a so-called cavity effect (English cavity effect can be estimated). Here are cubes of black cardboard with about four inches on a side and a hole of about five millimeters in diameter scanned on the hole side. The hole side can be modified by being made of white cardboard on the outside . The hole approximately represents a cavity radiator that emits practically no visible light. In the scan there should therefore be no signal at the location of the hole.

In practice, however, signals still occur that have two main causes:

The latter is caused by the fact that light from the area around the hole is scattered into the scanner's image converter and represents the cavity effect . The noise is essentially independent of location and therefore has a constant level .

The following eight sample images illustrate these effects. The first four are the original measurements, whereas the next four images with a gamma correction are provided . A good scan is shown on the left and a bad scan is shown on the right. The upper pictures show a perforated cube made entirely of black cardboard and the lower one with a white perforated outer surface.