Play media file
Demonstration of additive color mixing with the aid of CD case covers: Overlaying the three monochrome images reflected by the case covers results in a colored image.

The additive mixture in the trichromats , to which humans belong, is described by the three-color theory of Thomas Young and Hermann von Helmholtz . If the three primary colors red , green and blue are added in a suitable brightness , the color perception is white . The sensation is black when the sum is zero (no light). The sums of two primary colors produce the sensations yellow , cyan and magenta (secondary colors).

The creation of color stimuli that are spatially or temporally close to one another is also called additive color mixing , although the effective mixing process only takes place in the eye and brain.

The ideal of additive color mixing can be represented by a situation in which three spotlights of the same color intensity with the light colors red, green and blue illuminate a white surface, whereby the three color circles partially overlap. Each of the three projection circles appears in its pure color as long as it hits the projection surface alone. If two circles of light intersect, secondary colors are created, the colors yellow, magenta and cyan. All three circles of light intersect in the middle - the mixture appears white. The color black is represented by the darkness in the surrounding space. By regulating the intensity of the light emitters, any color nuance can be set in the overlapping area of ​​all three basic colors. Colored shadows are created at overlapping areas . 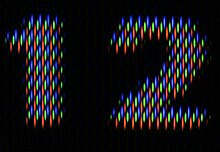 Depiction of a white "12" on a black background on a CRT TV . The close-up shows the individual colors that make up the digits.

Additive color mixing is the basis for those color rendering processes that are based on the RGB color space . Applications exist in particular in screens , such as color television . Digital photography is also based on this form. Depending on the color rendering process, different grids are used, such as the grain grid , the line grid or the lens grid method . The technical problems of color rendering are based primarily on the availability of economically, technologically and technically suitable phosphors with corresponding luminescence in the required excitation range. The description of colored areas on websites can be converted into web colors by specifying the proportions of the primary colors accordingly.

In technical systems, the additive color rendering is described using different three-dimensional color models . The aim is to adapt these to the "natural color of the user", the natural LMS space , as far as possible. The (technically) representable color space can be improved by additional lights (i.e. four-dimensionality). Sharp first chose this option in 2010 for its LCD televisions . With a fourth luminescent material in addition to the previous RGB pixels, red, green, blue luminous dots, yellow subpixels (RGBY) are installed for color mixing. These (extended) luminous dots are controlled by mathematical conversions. The technical goal is the improved reproduction of the critical yellow, gold and brown tones and skin tones. These reproduction problems are based on the (here) limited availability of economically justifiable phosphors, which means that the “ideal” primary colors are not available.

In contrast to the mixture of " colored lights ", the subtractive color mixture stands for the mixture of body colors , with which the coloring effect is achieved in analog photography and four-color printing .