This article or section needs to be revised: An explanation of the conceptual history is missing, especially in relation to the canvas fabric.
Please help to improve it , and then remove this flag. 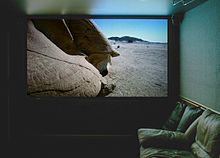 The surface can be, for example, a white cloth (painted or sprayed canvas) or a white wall in a room. However, a better image reproduction is achieved with special projection walls. They are usually designed as a roller blind, attached to a tripod or stretched in a frame. In the past, these fabrics were actually made of linen or cotton. Coated glass fiber fabrics are mostly used to avoid deformation and to make the cloths flame-retardant.

In cinemas, curved surfaces are often used to allow the audience to see a wider angle. Curved screens in the domes of planetariums and in IMAX dome cinemas are absolutely essential . For the preparation of the speakers behind the screen there are acoustically transparent screens through micro. For special applications, concave mirror-shaped projection screens with metallic coatings (aluminum tinsel in synthetic resin lacquer) are used, which have a significantly higher luminance factor for the middle area.

Transparent screens for rear projection are made from matted or coated glass or plastic sheets. For special requirements, a Fresnel lens can also be provided for defined light guidance. Use with compact projection units. The fewer bumps and the whiter the surface, the more realistic the image will be. For mobile screens in drive-ins and at outdoor events inflatable version (Airscreen) are used. 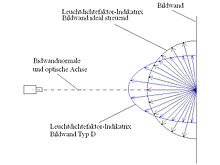 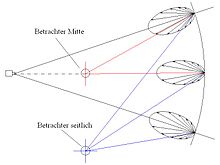 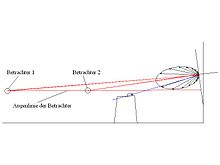 Inclined screen with better distribution of luminance towards the viewer

On the one hand, a reflected-light projection screen should have a high level of reflectivity, and on the other hand, it should distribute the light evenly to the observer's side. Sufficient luminance and good luminance distribution are required . In addition, the reflections must be diffuse to avoid a hotspot.

In order to achieve better black in a bright room, screens with a gain factor of 0.6 are increasingly being used. These black screens use the same principle as tube televisions or LC displays. In order to achieve the necessary contrast, projectors with more than 3000 ANSI lumens should then be used.

The luminance factor indicatrix of a type D screen shows an increase in the reflected luminance in the middle area and a reduction in the side area compared to the indicatrix of the ideal. Type S and B screen behave differently. Type S screen, specular screen, reflects the light from the projector more like a mirror. With the screen type B, beaded screen, the light from the projector is reflected back from the screen in the direction of the projector. The viewer in the middle of the room sees an evenly lit image and the viewer at the side has a good, even impression of the lighting of the image, albeit darker.

With a curved wall, this reduction in luminance is considerably improved on the sides. A curved screen results in a significant improvement in lighting conditions for the observer from the side. The radius of curvature of the screen is equal to the distance between the projector and the screen. Rigid projection screens designed in the shape of a concave mirror use the advantages of a curvature for both horizontal and vertical alignment. 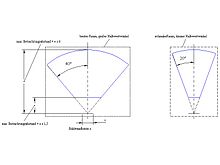 The luminance should also be optimized for vertical alignment. Depending on where the projector is set up, the screen can be tilted so that the maximum luminance points in the direction of the viewer and does not, for example, illuminate the ceiling. The half-value angle indicates the angle at which the light density drops to 50% of the value in relation to the normal of the screen. If a light drop of a maximum of 50% is permitted at the side seats, the viewing area is limited by this angle.

In DIN 19045-4 the “projection of still and moving image” is defined and in part 4 “reflection and transmission properties of projection walls; Characteristic sizes, type of screen, measurement, December 1998 ”, the screens are divided. Four main types are defined according to the luminance factor. With DIN 19045-4 of December 1998, the screen types P and M were changed to B and S, and type R was divided into RO and RS.

The size of the screen depends on the greatest distance from the observer and ultimately on the size of the room. The viewer from the greatest distance should still be able to see all the details. A viewer in the front seats, on the other hand, should still be able to see the picture as a whole from a short distance. In this way, the size of the wall is determined by the greatest viewer distance; the shortest viewing distance, on the other hand, should be taken into account by the arrangement of the viewer positions. The conditions in the open-air cinema pose a challenge to the screen .

A rule of thumb:

The information on the smallest and largest viewing distance refer to the "normal format" of approx. 2: 3 or 3: 4. For wide-screen processes, it is advisable to assume a standardized width of b = 1.33 h. The smallest elements are guaranteed to be recognizable if the conditions according to "DIN 19045 Projection of still and moving images - Part 3: Minimum dimensions for the smallest image elements, line widths, font and image character sizes in original templates for the projection, issue date: 1998- 12 “are complied with.

If a screen is to be used for different types of projection, a square wall is appropriate. All formats, from slides, portrait and landscape, overhead formats, various film and TV formats can be projected onto the wall. For the projection of rectangular formats, the screen cannot be fully extended with roll-up walls.

The luminance distribution for the viewer is determined on the one hand by the screen, on the other hand it is also influenced by the projector. A projection with a longer focal length and a larger projection distance hits the sides of the screen more perpendicularly, so the decrease in luminance for the side viewer is less. The screen is illuminated by the luminous flux of the projector. In order to achieve a good readability of the image, the illuminance of the projected image must be min. 5 times higher than the illuminance of the secondary light (room light) on the screen. The image projector (cinema projector, slide projector, video projector) should be centered on the projection surface, otherwise image distortions will occur. Some projectors have a way of correcting this distortion. ( Lens adjustment )

Note: The screen is only one component in the area of ​​viewing and projection conditions. Starting from the eye with its smallest resolution, then via the design of the templates to be projected, via the projector with a luminous flux matched to the size of the room and the design of the viewing room, only a coordinated system leads to optimal success.