In physics, transparency (from the Latin trans “(to) through” and (ap) parere “to show oneself, to appear”) is the ability of matter to let electromagnetic waves through ( transmission ). In everyday life, the term is mostly related to light , i.e. to the spectral range of electromagnetic radiation that is visible to humans . 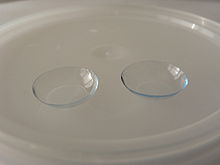 Transparency: contact lenses from plastic , petri dish made of glass , and air

In everyday life, a material such as window glass , transparent or translucent called when Behind Lying can be relatively clearly, the material is therefore substantially transparent to radiation in the visible spectrum.

Incident photons interact with different components of the material depending on the energy , and thus the transparency of a material depends on the frequency (or wavelength ) of the electromagnetic wave. Materials that are opaque to light can be transparent to other wavelengths of the electromagnetic spectrum , e.g. B. X-rays and radio waves . In the range of infrared radiation , for example, the vibrational energies of molecules or groups of molecules or also of the free electrons in the electron gas of metals are found . In the visible range, the energy of the photons is in the range of the binding energy of the valence electrons , which can be excited by the absorption of a photon in the conduction band . The involved photon is completely "extinguished". If a large part of the photons is absorbed, a material is opaque (subsequent effects such as recombination are initially neglected here). The band structure of the material is therefore (among other things) decisive for its transparency.

It is important for the absorption of photons that this occurs only in certain “energy portions” ( quantum ). This means that only photons of a certain energy can be absorbed in this way. Photons with higher or lower energy remain unaffected. Insulator materials such as glass are mostly transparent because their band gap is larger than the photon energy for visible light. These photons can therefore not be absorbed by valence electrons. The reason for this lies in the band structure of the material, which is influenced, for example, by the distance between the atoms. The fact that in glass the valence electrons are not excited into the conduction band and are therefore not available for charge transport also means that glass is not electrically conductive. In the case of semiconductors , which have a lower band gap energy, photons of higher energy (blue light) are absorbed. In terms of the overall optical impression, these materials are therefore not transparent, even if, for example, they are transparent to red light. However, the color impression cannot be derived directly from the pure spectral transparency.

Mere light permeability, such as with frosted glass, is generally not decisive in order to be described as transparent. For milk glass, the light is transmitted through a rough surface or by particles in the material is scattered . The light that is allowed to pass through is called diffuse light , as there is no sharp image of the objects behind it. If only darker and lighter areas are visible, we speak of translucency . In the case of slightly translucent materials, the translucent property is specified as opacity instead of translucency . Deep light is only a superficial translucency.

Transparency is mostly given with gaseous materials (e.g. air ), but also with some liquid and solid substances, e.g. B. clear water , ordinary glass and some plastics. If the degree of transparency depends on the wavelength of the light, then the transparent medium is tinted. This may in certain metal oxide - molecules in the glass, or (larger) colored particles, such as in colored smoke lie. If many of these colored particles are present, the gas, liquid or solid becomes opaque, e.g. B. thick smoke.

Probably the best known transparent solid material is glass . Most of the types of glass that are of technical importance today are silicate glasses. The chemistry of the silicate framework ensures a theoretical transparency window between 170 nm and 5000 nm. This fully includes and goes beyond the area that is visible to humans. In the UV range, very few silicate glasses achieve significant transparency below 300 nm. The exceptions are quartz and special borosilicate glasses with a high boron content , which also have good transparency in the UV-C range. In the IR range, absorption by water occurs from around 2500 nm onwards, which reduces the transparency there, before the silicate network reduces the transparency to zero from around 4500–5000 nm. Since the visible area of ​​light passes through silicate glass almost unhindered, it has no color for our eyes. On the other hand, brown glasses, such as for beer bottles or medicines, contain dopants that absorb in the visible range and thus appear colored to our eyes.

Phototropic glass is transparent glass that reacts to UV light. It is also known as photochromic . The phototropy is based on a reversible transformation of deposited silver halide-containing precipitates. During the process, the glass is colored.

Simple representation of the phototropic reaction.

Different colors can be produced depending on the type of halide in the glass. Brown or gray photochromic glasses are used for the production of sunglasses , which automatically become darker (quickly) when the brightness is high, and more transparent again when the brightness decreases (more slowly). The difference in speed is due to the fact that an equilibrium is established between two opposing reactions: Darkening takes place in a reaction of the 0th order (every incident light quantum of suitable wavelength causes a molecular transformation). In contrast, the reverse process is a first-order temperature-dependent reaction that proceeds according to an exponential function (the same proportions react in the same times, see half-life ). These properties mean that such glasses are not so well suited for driving a car if the brightness changes in quick succession; When entering a tunnel, the glasses remain dark for (too) long. When it is very cold and bright - in winter when there is snow - the glasses are black; It slowly becomes clear in the dark, it quickly becomes possible under warm water.

Electro-tropic glass is a form of glass that, in its normal state, is translucent but opaque (opaque, similar to milk glass) and only becomes transparent when an electrical voltage is applied. This is done with the help of liquid crystals that are located between two layers of normal glass. From a technical point of view, these panes work similarly to an LC display. Electro-tropic glass is used as a switchable privacy screen. The user can decide for himself when he can look through the glass and when not. Application examples are glass partition walls in limousines (e.g. Maybach 57 and 62 ) and the partition panes between the driver's cab and panorama compartment ("lounge") in the end cars of the ICE 3 and ICE T , as well as toilet doors that only become opaque when they are locked. Electro-tropic glasses belong to the so-called intelligent glasses .