Metal is a redirect to this article. Further meanings are listed under metal (disambiguation) .

Metals (from ancient Greek μέταλλον metallon "mine, ore, metal") are the chemical elements that are to the left and below a dividing line from boron to astatine in the periodic table of the elements . That is about 80 percent of the chemical elements, whereby the transition to the non-metals via the semimetals is fluid and many of them can form modifications with metallic and atomic bonds.

The term is also used for alloys and some intermetallic phases ; it applies to all materials which, in solid or liquid form, have the following four characteristic metallic material properties:

All of these properties are based on the fact that the atoms in question are held together by the metallic bond , the most important feature of which is the freely moving electrons in the lattice.

At extremely rapid cooling, atoms of these elements can also cluster amorphously without forming a crystal lattice - see metallic glass .

On the other hand, atoms of other elements can also form metallic bonds under extreme conditions (pressure) and thus assume the metallic properties mentioned - see metallic hydrogen .

Metals have found diverse uses as materials since the beginning of civilization . Under the term metal physics or metal science, physicists and materials scientists deal with all the basics, see under solid state physics , and with applications, see under materials science .

Metals are formed from the elements that are on the left and below a line from boron to astatine in the periodic table of elements , with the metallic character increasing from top to bottom or from right to left. At the very top right are the non-metals , with the semi- metals in between . The subgroup elements are all metals. The border to the non-metallic is fluid. For example, antimony , arsenic , cerium, and tin have both metallic and non-metallic modifications .

Belonging to main or subgroups of the periodic table is also decisive for chemical behavior. 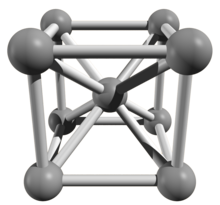 The following properties of atoms are required for the formation of the metallic state:

The result is that such atoms cannot connect to one another via atomic bonds to form molecules or lattices. At most, atomic bonds occur in metal vapors, e.g. B. sodium vapor consists of about 1% Na 2 molecules.

Rather, metal atoms organize themselves into a metal lattice , which consists of positively charged atomic cores , while the valence electrons are distributed over the entire lattice; none of these electrons belong to any particular nucleus. These freely moving electrons can be imagined as particles of a gas that fills the space between the atomic cores. Since this electron gas is responsible for the good electrical conductivity of the metals, the energy level at which the free electrons are located is called the “ conduction band ”. The precise energetic conditions are described by the band model based on the orbital model .

The following typical properties of metals result from this type of bond and this lattice structure :

The properties that are relevant for heat conduction, such as density , heat capacity , thermal conductivity and thermal diffusivity, vary greatly. Silver, for example, has a thermal conductivity of 427 W / (m · K) which is around 50 times higher than that of manganese, see list of values .

When associated with non-metals, the metals generally appear as cations ; That is, the outer electrons are completely given up to the non-metal atoms and an ionic compound ( salt ) is formed. In an ion lattice , the ions are only held together by electrostatic forces .

In compounds with transition metals and in the case of larger anions (such as the sulfide ion ), all transition stages to the atomic bond can occur.

Metal cations, v. a. those of the subgroup metals form complex compounds with bases ( water , ammonia , halides , cyanides, etc.) , the stability of which cannot be explained by electrostatic attraction alone.

Mixtures of a metal and one or more other elements, which can be metallic or non-metallic, are called alloys if this mixture has the typical metallic properties (ductility, electrical conductivity, ...), i.e. if there is still a metallic bond.

Alloys often have completely different physical and chemical properties than pure metals. In particular, the hardness and strength are sometimes orders of magnitude higher. The corrosion resistance can also increase significantly. The melting point of alloys, on the other hand, is often below that of pure metals; with a certain composition the lowest melting point is reached, the eutectic .

As the first specifically manufactured alloy in human history, bronze was used, an alloy predominantly made of copper and 5 to 20% tin. Today, steel is the most frequently used alloy, a mixture of iron with shares of carbon and some other elements.

The core of the earth consists mainly of iron , because it occurs in very large quantities firstly because it is the most stable element in terms of nuclear physics , and secondly because of its high density.

In the earth's crust, on the other hand, non-metals predominate; relatively common metals are aluminum , iron , manganese , titanium , calcium , magnesium , sodium and potassium . Many rare metals, however, occur in their mining sites in a highly enriched manner. Rocks that contain usable metals in minable concentrations are called ores . The most important ores include:

The metals are metallurgically extracted from the respective ores .

Some precious metals, v. a. Gold , also come dignified , i.e. H. in pure form and not as a compound (ore or mineral ).

Many metals are important materials. The modern world would be impossible without metals. It is not without reason that phases of human development are referred to as the Stone Age , Bronze Age and Iron Age according to the materials used .

Pure metals are used to manufacture electrical cables because they have the greatest conductivity. Mainly unalloyed copper and aluminum and rarely gold are used for this. Otherwise pure metals are practically never used.

The following list contains the most important metals and alloy components , not compounds:

In astrophysics , metal is defined differently, see metallicity ; here it describes every chemical element above a certain atomic number (usually higher than helium ). These are all elements created by nuclear fusion in stars or by supernovae , whereas hydrogen and helium (together with some traces of lithium ) are thought to have been created by the big bang . The metallicity of a star is related to the time it was formed (see population ).

It is assumed that hydrogen in the interior of sufficiently heavy gas planets can change into the metallic state (in the sense of the chemical metal definition); this metallic hydrogen is probably also responsible for the extremely strong magnetic field of Jupiter . However, metallic hydrogen does not contribute to the astrophysical metallicity of the object in which it occurs.

Metal here denotes an element of the traditional five-element theory .

On the history of metals