Due to the different thermal conductivity and heat capacity of paving stones and grass, the paving stone outline can be seen through this melting snow.

Heat conduction - also known as heat diffusion or conduction - is a mechanism for transporting thermal energy . According to the second law of thermodynamics , heat only flows in the direction of a lower temperature. No thermal energy is lost; the law of conservation of energy applies .

Further mechanisms for the transport of thermal energy are convection and thermal radiation . 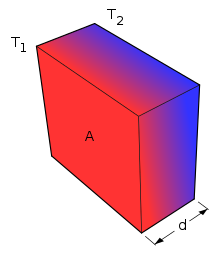 The heat output transferred by conduction is described by Fourier's law (1822, after Jean Baptiste Joseph Fourier ), which for the simplified case of a solid body with two parallel wall surfaces reads:

Unit for is watt (W)

The transferred heat output is therefore

Model of a heating pipe that is cooled by a metal brace at different times.

From today's perspective, the heat transport is described by the more precise term of heat flow density . The approaches to this go back to Fourier and Newton. The following relationship with the temperature gradient applies :

If you specialize this equation on the so-called heat conduction equation , it must be noted that this form of the heat conduction equation only applies to homogeneous, isotropic media. So only for media that have the same composition everywhere and that do not have a preferred orientation (preferred orientations occur, for example, through fibers in composite materials, but also through so-called grain stretching in rolled sheet metal, etc.). For these cases - and only for these - the material properties of the medium under consideration can be assumed to be variables that are exclusively dependent on the temperature. Strictly speaking, the equation formulated in this way only applies if no heat is introduced into or removed from the body under consideration through external effects. If this is the case, a so-called source term would have to be added. With these restrictions, the following form of the heat conduction equation applies:

The differential equation generally describes transport processes (such as diffusion processes - by which one understands a material transport due to a concentration difference , or in the case of the heat conduction equation just a "migration" of the temperature distribution in a body due to a temperature gradient). The analytical solution of this equation is not possible in many cases. Today, technically relevant thermal conductivity tasks are calculated using the finite element method . As a result, one knows the temporal and spatial temperature distribution (temperature field). In this way, one can, for example, infer the spatial expansion behavior of the components, which in turn determines the local stress state. The temperature field calculation thus becomes an important basis for all technical design tasks in which the thermal component load cannot be neglected.

where is the Nabla operator , the mass density , the specific heat capacity , the thermal conductivity and the heat flow introduced per volume by external or internal sources .

In bodies on whose surfaces there are constant thermal conditions of the 1st type (surface temperature), 2nd type (heat flow density) or 3rd type (fluid temperature and heat transfer coefficient), very complex temperature fields are usually formed. In special cases, these can be calculated analytically by solving Laplace's differential equation. As a rule, however, numerically working simulation models are used. With knowledge of the temperature field, the heat flows can also be determined. In numerous cases, the user is only interested in the heat flows occurring on the body surfaces and / or the temperatures at certain locations within the solid. If such a body has been examined with the adjacent thermal conditions for states that do not represent any linear combinations among one another, a shape coefficient matrix can be determined from it. With this uniquely determined matrix of shape coefficients, the heat flows on the surfaces and selected local temperatures within the solid can then be determined, for example for variable surface or adjacent fluid temperatures or for impressed heat flow densities with simple calculation programs.

In dielectric solids ( insulators ), heat conduction occurs only through lattice vibrations, the phonons . The movement of the atoms is passed on from neighbor to neighbor. All electrons are bound to atoms and therefore cannot contribute to heat conduction. At very low temperatures, the thermal conductivity of non-metallic crystalline solids is limited by interface scattering.

Light atoms or molecules conduct heat better than heavy ones, because they move faster with the same energy content . In contrast to convection , no vortices are formed with pure heat diffusion in liquids and gases.

In superfluids , heat is not transported by diffusion, as is usual, but by temperature pulses with a wave character . This effect is called the second sound .