Flag of the EZLN

The Ejército Zapatista de Liberación Nacional ( EZLN , German  Zapatista Army of National Liberation ) is a predominantly indigenous organization in Chiapas , one of the poorest states in Mexico , which first appeared in public on January 1, 1994 with an armed uprising and has been since then with political means for the rights of the indigenous population of Mexico, but also generally against neoliberal economic policy and for autonomous self- government.

The name is a tribute to Emiliano Zapata , one of the historical leaders of the Mexican Revolution , in whose tradition the EZLN sees itself. Therefore they are also called Zapatistas (or German Zapatistas ).

The EZLN was the first left guerrilla movement that after the collapse of the so-called Eastern bloc federated Socialist community has appeared. In her comuniqués she formulated political goals that differ from the state socialist ideas of social change through their reference to grassroots democracy . Through the use of the Internet as a medium , which was still new at the time , the poetic, metaphor-rich communiqués of their spokesman Subcomandante Marcos spread mainly in western industrialized nations. In particular, the movement against neoliberalism and capitalist globalization (cf. globalization criticism ) saw the Zapatistas as role models and received strong support.

In contrast to other guerrilla movements, the Zapatista discourse is not about taking power in the state. Instead, they emphasize their claim to grassroots democracy and aim to gradually build up autonomous structures at communal, municipal and regional level. The PR skills of the mestizo spokesman for the rebels, Subcomandante Marcos, with which the development of autonomous structures, indigenous grassroots democracy, gender equality and ecology are brought closer to an international public, led to the identification of large parts of the movement critical of globalization. Like them, the EZLN calls for self-determination of the people and calls for a worldwide fight against capitalist globalization. The EZLN has, quite intentionally, great influence on the discussion within the internationalist left , especially with its radical criticism of power .

One of the basic ideas of the EZLN is "obeying commands" ( mandar obedeciendo ), making decisions in accordance with the will of the people. Their motto “ Another world is possible ” also became the slogan of the movement critical of globalization, especially attac . Another motto is “ Questioningly we look for the way ” and describes your view of the relationship between theory and practice.

The EZLN was founded on November 17, 1983 by Mexican metropolitan leftists , three mestizos and three indígenas , in the Selva Lacandona , a jungle area on the southeastern border of Mexico as a classic Marxist and Maoist liberation army, but merged different elements within the first ten years of its existence, see above that it was perceived as a " new type of guerrilla ". The EZLN found its base with members of various Mayan ethnic groups of the Selva Lacandona, such as the Tzotzil , who later immigrated to this region. The Lacandons , which gave the region its name and who had received land titles from the Mexican government in the 1970s, were opposed to the EZLN and viewed the Tzotzil as a threat.

The EZLN first became known to the general public on January 1, 1994, the day the North American Free Trade Agreement NAFTA came into force . Masked fighters simultaneously occupied five district capitals in the east of Chiapas, declared war on the Mexican government and their will to march as far as Mexico City in order to overthrow the government there. However, they failed to achieve a nationwide revolution. After a few days of struggle, the Zapatistas withdrew from the cities into the inaccessible jungle valleys where the indigenous people who support them live.

After 12 days of armed fighting in January 1994, a ceasefire was reached under pressure from civil society in major Mexican cities. Negotiations took place with the mediation of the Catholic Bishop Samuel Ruiz, which two years later led to the signing of the Treaties of San Andrés , which provided for the inclusion of autonomy rights for the indigenous population in the Mexican constitution. However, despite a massive campaign by the Zapatista rebels and sections of international civil society, these treaties were never incorporated into the constitution. Therefore, the EZLN implemented de facto autonomy in the east of Chiapas.

Countermeasures by the Mexican Army

A surprise attack by the Mexican army followed on February 9, 1995 , which led to the rebels losing territorial control of the Las Cañadas and Selva Lacandona regions. Parallel to the stationing of tens of thousands of soldiers from the Mexican army along the main cul-de-sac, massive government funds were approved for infrastructure and development programs, which only benefited the residents of the region who were loyal to the government. The paramilitary groups, which were also set up as part of a large-scale counterinsurgency strategy, have since then repeatedly carried out bloody attacks on Zapatista and sympathetic communities. These culminated in the attack by right-wing paramilitaries in Acteal ( Municipio Chenalhó ) on December 22, 1997 on a congregation assembled for worship. The worshipers were members of the pacifist Christian Tzotzil organization Abejas ("bees") and not members of the EZLN. Known as the Acteal Massacre , the attackers killed 45 people, including children and pregnant women. These attacks belong to the strategy of the " war of low intensity " (Guerra de Baja Intensidad or Low Intensity Warfare), through which the EZLN should be wiped out.

The EZLN held two intercontinental meetings against neoliberalism and for humanity . About 3000 participants from at least 54 countries came to Chiapas for their first meeting in 1996. In order to emphasize the international context of the struggles, in 1997 the second meeting was explicitly not held in Mexico, but in European Spain.

With their call to “create a collective network of all of our partial struggles and resistances, which respects differences and recognizes similarities” and thus to create the world anew, the Zapatistas found an echo around the world in newer movements as well as with their radical, but non-violent approach.

The contacts made there resulted in the establishment of Peoples Global Action (PGA) in February 1998 , a worldwide network for the exchange of information and for action coordination.

In recent years the EZLN has endeavored to transfer more and more responsibility to its civilian base and to decouple the military structure, which is still responsible for the security of the base communities, from the civilian administrative structures.

On August 9, 2003, the so-called Caracoles were founded, five regional administrative centers in which the “ Juntas of Good Government” have their headquarters. The Good Government Juntas see themselves as a rotating, grassroots government that is responsible for all issues in the respective region and also handles the issues of residents who are not Zapatista. The Zapatistas declared the establishment of the autonomous structures to be a strategic step in order to counter what they believed to be ignorant official policy towards the indigenous population of Mexico. Since 1995 there have been 38 autonomous municipalities at the municipal level, which have now been grouped into the five regions. Autonomy includes the establishment of a government-independent health and education system, income-generating projects and infrastructure projects. Own legislation, e.g. B. to protect tropical forests is in progress. Zapatista autonomy has found imitators in several Mexican states. 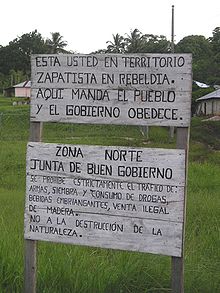 Shield in the Zapatista rebel area

In June 2005 it was announced that the Inter Milan football club had accepted a challenge from the EZLN for a football match.

Also in the early summer of 2005, after a brief phase of the “red alarm” and an internal survey, the EZLN called nationally and internationally to launch a broad, multifaceted campaign by all left grassroots organizations at the same time as the presidential election campaign in Mexico. The basis of the “other campaign” is the 6th declaration from the Lacandon jungle . With her u. a. a rejection of the entire party system in Mexico - instead, the Zapatistas rely on extra-parliamentary mobilization.

In a series of meetings between August and September 2005, a commission of Zapatista commanders met with numerous groups on the Mexican left to learn about their concerns, self-portrayals and struggles. In mid-September, at a first plenary session of the “other campaign”, it was announced that two round trips through all Mexican states are planned for 2006 in order to build structures for the campaign nationwide.

First of all, the EZLN spokesman, who called himself Subcomandante Marcos , traveled all over the country on January 1, 2006 to get to know local groups, organizations and problems. The end of the trip, initially planned for June 2006, was postponed for several months due to the incidents in San Salvador Atenco . In a second phase, which began on March 25, 2007, delegates from all organizations involved in the “other campaign”, together with a delegation of the Zapatistas, made a tour with the aim of developing a civil nationwide program of combat against the current political system. The “other campaign” is accompanied by demonstrations and marches. As part of the “other campaign”, Subcomandante Marcos appears with the title Delegado Zero .

Since the uprising of 1994 and parallel to its efforts to build autonomous structures in Chiapas, the EZLN has been campaigning for an improvement in the situation of the indigenous population, a socialization of the Mexican economy and the democratization of Mexico with various civil-political initiatives .

Structurally, the EZLN is an indigenous peasant militia. An important part of the military structure are the milicianos (militia officers), small farmers who continue to work on their fields and can be mobilized if necessary. The hard core is made up of around 3,000 insurgentes ("insurgents"). This structure is supported and carried by the base de apoyo (the civil support base), by far the largest group (several tens of thousands). The supreme decision-making body of the EZLN, the "Kommandantur" (CCRI-CG - Secret Revolutionary Indigenous Committees - General Commandant), consists of representatives of the village communities. The proportion of women in the Zapatista army is around a third.

The EZLN continues to be threatened and repeatedly attacked, on the one hand by right-wing paramilitaries, whom the EZLN alleges to have links to the military and the government, which have also been documented in the past, as well as by the government itself, but also by allied peasant organizations as recently as 1994. With which the Zapatista communities are now fighting over previously jointly occupied land. The EZLN leadership repeatedly withdrew from the public in order to prepare for an impending escalation of the armed conflict, but at the turn of the year 2008/2009 appeared again in front of an audience of international supporters at the Caracol Oventic.

In December 2012 tens of thousands of Zapatistas occupied central marketplaces in Ocosingo , San Cristóbal de las Casas and Las Margaritas, and ran to Comítan, all cities they had taken during the Zapatista uprising in 1994.

“Todo para todos, nada para nosotros!”
- Everything for everyone, nothing for us!

We don't have to conquer the world. It is enough to recreate it. Today. By U.S!
- ( Subcomandante Marcos : Messages from the Lacandon Jungle)

“Un mundo donde quepan muchos mundos.”
- A world in which many worlds have space.

“Preguntando caminamos.”
- We go ahead questioningly. (Motto of the EZLN)

Reports on the "Other Campaign"