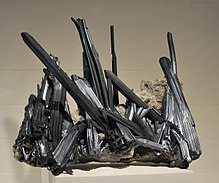 Sulphides are salts or alkyl or aryl derivatives of hydrogen sulphide (H 2 S). The salts belong to the substance group of metal-sulfur compounds and contain the sulfide anion S 2− as a component. The anion itself is also referred to as sulfide for short. Metal sulfides represent an important group of ores in mineralogy . In analysis , metal sulfides belong to the so-called hydrogen sulfide group and the ammonium sulfide group .

The alkyl or aryl sulfides belong to the organic compounds (organic radical: R−) and have the structure R − S − R '. They are also known as thioethers .

Pyrite cubes in the bedrock, pyrite is an iron sulfide

Together with metal - or semi-metal - cation arising from about 600 sulfide minerals , which are characterized generally by characteristic colors, and stroke colors. They include a number of important ore minerals, so that inorganic sulfides, because of their sometimes high metal content, are used as raw materials in extraction and the like. a. of iron , copper , lead , zinc , mercury , arsenic and antimony are used. Here are some sulfidic minerals:

The sulfides of the alkali and alkaline earth metals can also form polysulfides through the addition of sulfur to free sulfide electron pairs . Heavy metal salts form insoluble precipitates with sulfide solutions - a property that is used for analytical chemistry in the cation separation process .

Polymetallic sulphides, which are formed at hydrothermal springs in the deep sea , could in the future represent a raw material source for various valuable and rare metals. In 2013, Germany applied for a license to mine maritime raw materials in the Indian Ocean near Madagascar .

Metal sulfides such. B. Iron sulfide are to be understood as salts of hydrogen sulfide acid. Sulphides react with correspondingly stronger acids such as hydrochloric acid to form the respective metal salts (in the case of hydrochloric acid to chlorides ) and hydrogen sulphide (H 2 S), which is noticeable by its very unpleasant odor of rotten eggs.

In aqueous solution, sulfide ions are mostly present as hydrogen sulfide anions (HS - ). According to studies with Raman spectroscopy published in 2018, the anion S 2− , which has long been postulated in aqueous solution, does not exist.

Hydrochloric acid is a weak acid in aqueous solution. This property is used, among other things, in the cation separation process in the hydrogen sulphide and ammonium sulphide group, since the pH-dependent sulphide ion concentration enables successive precipitation of the differently soluble sulphides.

The hydrogen sulfide group includes only those elements that form sparingly soluble sulfides with the release agent even in an acidic environment ( precipitation reaction ; sulfide examples in the picture on the right, from left to right: precipitates with manganese (II), cadmium (II), copper ( II), zinc (II), antimony (III), bismuth (III), lead (II) and tin (IV) cations). The ammonium sulfide group includes the metal sulfides that can only be precipitated in a basic medium. They are soluble when acids are added (see above). In addition to sulfides, there are also related thio and sulfo salts. Here, oxygen atoms have been exchanged for sulfur atoms (example: sodium thiostannate and thioantimonate, sodium thiosulphate / fixing salt).

Another possibility is to acidify a solid sample with a strong acid. The result is a characteristic odor of rotten eggs, caused by the gas hydrogen sulfide , which can be displaced from the sulfide with the acid . The smell is also generally reminiscent of putrefaction , as hydrogen sulphide can also arise during metabolic processes in microbes that "breath" sulfur.

With sodium nitroprusside , a violet solution of [Fe (CN) 5 NOS] 4− forms in a weakly alkaline solution .

The chemical precipitation of metal sulfides plays a role not only in technical manufacturing processes, for example in the manufacture of pigments , but also in wastewater treatment processes. The low solubility of the metal sulfides is used in order to achieve the lowest possible residual metal concentrations. Most sulfides are much less soluble than hydroxides , for example: lead sulfide , cadmium sulfide , iron sulfide , copper sulfide , nickel sulfide , silver sulfide or zinc sulfide . Sodium sulfide or sodium hydrogen sulfide is generally used as the sulfidic precipitant .

Mechanical and other applications

Finely ground metal sulfides such as molybdenum (IV) sulfide and tin (IV) sulfide are used, sometimes mixed with graphite , as solid lubricants in lubricants to improve the emergency running properties of moving parts in machines. To lead (II) - and antimony (III) sulfide is thereby increasingly omitted due to at least suspected environmental and health hazards. Metal sulfides can also be found in brake and clutch linings and as a component of abrasives . They are also used as functional additives in plastics , sintered metals and batteries, among other things .

Many odorous substances in natural aromas are organic sulfides, such as those found in coffee. The natural amino acid methionine is a sulfide. Racemic DL methionine is produced as a feed additive on an industrial scale.

Ingredient of the urine of the red fox ( Vulpes vulpes ) - an organic sulfide.

An organic-chemical sulfide has been isolated from the urine of the red fox ( Vulpes vulpes ), methyl (3-methylbut-3-enyl) sulfide .

Significance for the environment

Sulphides play an important role in the formation of acidic mining water . Acid mining waters are created when the sulfidic minerals present in the rocks are exposed to oxidizing conditions. The iron sulphides that are most common in the mining areas are pyrite (FeS 2 ) and marcasite (FeS 2 ). According to Günter Wächtershäuser's theory, iron sulfide minerals also played a role in the origin of life (chemical evolution).