When alkali metals are chemical elements lithium , sodium , potassium , rubidium , cesium and francium from the 1st main group of the Periodic Table referred to. They are silver, shiny, reactive metals that have a single electron in their valence shell . Although hydrogen is in the first main group in most representations of the periodic table and in some cases has similar chemical properties to the alkali metals, it cannot be counted among these because it is underStandard conditions is neither solid nor has metallic properties.

Alkali metals are shiny metallic, silvery-white, soft light metals . Cesium has a golden hue with the slightest contamination. They can be cut with a knife . Alkali metals have a low density . They react with many substances , for example with water , air or halogens, sometimes extremely violently with strong heat generation. In particular, the heavier alkali metals can self-ignite in air . Therefore, they are stored under protective liquids such as paraffin or petroleum (lithium, sodium and potassium) or in the absence of air in ampoules (rubidium and cesium).

As elements of the first group of the periodic table they have only a weakly bound s - electron , they give off light. Their first ionization energies and their electronegativities are correspondingly small. In compounds they all occur almost exclusively as monovalent cations , although compounds are known in which these metals are present in anionic form (e.g. natrides , complexed with so-called cryptands ).

Alkali metals and their salts have a specific flame color :

Because of this flame color, alkali metal compounds are used for fireworks .

In atomic physics alkali metals are used, since it is particularly easy with because of their particularly simple electronic structure cool lasers can.

The radius of the element atoms as well as the cations increases with increasing mass number. Many other properties of the alkali metals show a trend from top to bottom within the group:

The thermal stability of hydrides decreases from lithium hydride to cesium hydride . Alkali hydrides are used as reducing or drying agents. 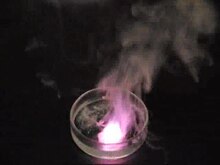 The reaction with water to form alkali metal hydroxides takes place with the release of hydrogen :

The reactivity increases sharply from lithium to cesium . While an almost cubic sample of lithium reacts relatively sluggishly, even with sodium , the hydrogen generated ignites in the presence of atmospheric oxygen due to the development of heat. From potassium onwards , as the reaction progresses, the metal also evaporates and ignites , not least because of the boiling point, which decreases with the atomic number (see above ). However, even in the absence of air, less than 0.5 g of sodium can react explosively with water, which should actually be inhibited by the reaction products, hydrogen and alkali metal hydroxide, formed on the contact surface of the starting materials . High-speed imaging of an experiment in which drops of an under standard conditions liquid alloy of potassium and sodium under an inert gas were placed atmosphere in contact with water, apply a initial taking place Coulomb explosion ( "negative surface tension ") and the associated strong increase in surface area of the with With the exception of lithium, unalloyed alkali metal samples molten after a short time as the cause of the uninhibited process, the high speed and thus the violence of these reactions . The alkali metal hydroxides are colorless solids that easily dissolve in water when heated to a great extent and have a strongly alkaline reaction. The hydroxides and their solutions are very caustic.

The reactivity of the alkali metals increases with increasing atomic number , because with increasing number of electron shells the outer electron is more and more shielded from the attraction of the positively charged atomic nucleus and can therefore be split off more easily. The increase in reactivity can be clearly seen in the reaction of the various metals with water : Lithium and sodium react with water violently, producing hydrogen, but without the hydrogen igniting. Potassium and rubidium react with spontaneous ignition of the hydrogen, cesium reacts explosively. The alkali metals react particularly well with non-metals , which only lack a few electrons in order to achieve a noble gas configuration.

The reactivity increases from lithium to cesium and decreases from fluorine to iodine . Sodium hardly reacts with iodine and reacts very slowly with bromine , while the reaction of potassium with bromine and iodine is explosive.

Alkali metals can remove the halogen from halogenated hydrocarbons with phenomena of explosion, forming carbon and the corresponding alkali metal halide:

With liquid ammonia, alkali metals give solutions that are intensely blue in color. These solutions, which consist of positive alkali metal ions and solvated electrons, are a very strong reducing agent and are used, for example, for Birch reduction . If a suitable complexing agent is added to these solutions, corresponding salts with alkali metal anions, the so-called alkalides , can form.

Hydrogen , the first element of main group 1, is a non-metal under normal conditions. It is therefore not counted among the alkali metals, but shares some properties with them. Like the alkali metals, hydrogen always occurs in monovalent form and, under extremely high pressure, is converted into a metallic high-pressure modification, metallic hydrogen . Conversely, some alkali metals also have properties such as hydrogen under certain conditions, e.g. B. lithium as a gas consists of 1% diatomic molecules.