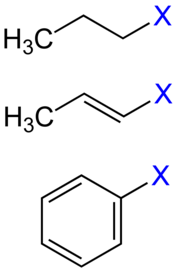 They usually have a higher boiling temperature than the corresponding hydrocarbons, as their molecules interact more strongly with one another due to increasing van der Waals forces . This is mainly due to the better polarizability of halogens compared to hydrogen , which increases from top to bottom within the halogen group . For example, fluoro- and chloromethane are gaseous at room temperature, iodomethane is liquid, and the completely halogenated tetraiodomethane is already in solid form.

Fluorinated hydrocarbons are a specialty , in which the boiling point can even decrease with increasing degree of fluorination. Dispersion forces play a much smaller role here due to the poor polarizability of fluorine. They are replaced by significantly weaker dipole-dipole forces , which are caused by the high electronegativity difference between fluorine and carbon and which are strongly dependent on the molecular geometry . Due to their symmetrical molecular structure, perfluorinated hydrocarbons do not have an electrical dipole moment . The intermolecular interactions in these compounds are so weak that they are used as high-quality sliding and non-stick coatings , for example on dirt-repellent clothing or cookware .

Halogenated hydrocarbons are used as effective poisons , for example in insecticides . Some compounds are suspected of being carcinogenic . Compounds of low acute toxicity also cause long-term effects, as they are often difficult to break down and, due to their lipophilic character, accumulate in the fat layer of humans and animals. Certain halogenated hydrocarbons such as DDT and its breakdown products DDE , DDD and chlordane also seem to intervene in the hormonal system of higher animals because of their similarity to steroids . Sex reassignments have been discovered in fish and amphibians . In American stubborn minnow ( Pimephales promelas ), natural and artificial oestrogens reduced the sperm production of the males and thus led to a strong reduction in the fish population. Halocarbons are also blamed in part for depleting the ozone layer .

A halogen atom can be incorporated into a hydrocarbon compound through nucleophilic or radical substitution or through addition reactions :

Example of an addition of hydrogen chloride to trans - 2-butene . This creates 2-chlorobutane , a chlorinated hydrocarbon

Haloalkanes, also called alkyl halides, are derivatives of the alkanes . Their basic structure is formed from saturated hydrocarbon molecules in which one or more hydrogen atoms have been replaced by elements of the 7th main group ( halogens ) of the periodic table .

Haloalkanes are often excellent solvents for substances that do not dissolve in water and are therefore used for degreasing metal surfaces in metalworking.

In the chemical industry, haloalkanes are used as starting substances in the manufacture of various other substances. This is based on the fact that the bound halogen atoms, as halides, are good leaving groups in S N 1 or S N 2 substitution reactions . Haloalkanes are also used as starting products in the production of ethers from alcoholates (Williamson's ether synthesis).

Some haloalkanes are carcinogenic or are suspected to be carcinogenic. With severe acute as well as chronic exposure , they also cause severe organ damage to the liver and kidneys. The dangerous compounds include in particular 1,2-dichloroethane , carbon tetrachloride , chloroform , dichloromethane , and haloalkanes, which are good alkylating agents , such as iodomethane .

Multiply halogenated alkanes must never be treated with alkali metals or strongly basic drying agents, since spontaneous, explosive reactions can occur between these substances.

Discovery of the numbing effects of chloroform by
James Young Simpson and friends, 19th century

Halogen alkenes are derivatives of alkenes . Their basic structure is formed from unsaturated hydrocarbon molecules in which one or more hydrogen atoms have been replaced by elements of the 7th main group ( halogens ) of the periodic table.

Despite their toxicity, the haloalkenes have a wide range of uses in the chemical industry, especially in the manufacture of plastics and pharmaceuticals .

Halo aromatics (also halo arenes ) are derivatives of aromatics or arenes in which one or more hydrogen atoms have been replaced by elements of main group 7 ( halogens ) of the periodic table. Most aromatic halogen compounds are highly toxic and are or have been used as insecticides or fungicides . Many of them are now banned.

A number of haloalkanes are derived from methane and ethane, which are used in a variety of ways in technology and everyday life. Chloralkanes are common solvents for fats and resins: dichloromethane and trichloromethane ( chloroform ) are used, for example, to extract vegetable oils and to degrease metal parts. Trichlorethylene was used in “dry cleaning” as a clothes bath . 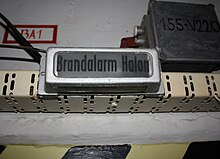 Fire extinguishing agents
The halogenated hydrocarbons used in fire extinguishers and automatic extinguishing systems are called halons. Since they attack the ozone layer to a large extent , the production of halons has been banned worldwide since January 1st, 1994. A longer exit period applies to developing countries. For partially halogenated fluorine-bromine hydrocarbons (HFCs) the phase-out date was January 1, 1996. Since 2000, halons may only be used in Europe in areas of application that are listed in Annex VI of Regulation (EC) No. 1005/2009 as critical Uses are listed and thus approved, such as in civil aviation as a weight-saving extinguishing agent, which is used in freighters or cargo holds and carried in hand-held fire extinguishers . In military and civil aviation (e.g. Airbus , Boeing , Embraer , Bombardier ) it is still used as an extinguishing agent for engine shafts and engines and can be found, for example, in the fire extinguishing system of the F / A-18 . Examples:

Refrigerant
Due to their properties, halogenated hydrocarbons are ideally suited as refrigerants. Any commissioning or decommissioning of systems that contain more than three kilograms of refrigerants that deplete the ozone layer or refrigerants that are stable in the air must be reported by the owner to the competent authority. Systems that are already in operation are also notifiable in many EU countries. They were introduced as refrigerants in refrigerators in the USA in the 1930s by Thomas Midgley and Albert Leon Henne (Freon).
solvent
Halogenated hydrocarbons are largely non-polar substances and are therefore good fat solvents. High doses or constant exposure can lead to health problems.
Pesticides
Halogenated hydrocarbons are also used in crop protection. Chlorinated hydrocarbons (e.g. DDT ) in particular are or have been used in the field of insecticides .
Melt treatment agents
Halogenated hydrocarbons were used in significant quantities as a substitute for the hazardous use of chlorine gas between 1930 and 1990 to remove hydrogen and floating oxides in the melt treatment of aluminum and its alloys. Thereafter, the use was restricted or banned because of the presumed proximity to degradation products similar to Seveso-Dioxin .
Propellant component in spray cans
Important propellants are trichlorofluoromethane CCl 3 F and dichlorodifluoromethane CCl 2 F 2 ; both substances are considered physiologically harmless. However, they have been found to deplete the ozone layer by releasing chlorine radicals in the stratosphere, which decompose the ozone in a series of reactions. Therefore, the use as a propellant in spray cans is no longer common for ecological reasons.

Brand names and their notation

Analogous to the Halon notation, the following notation applies to Freon , Frigen and Solkane :

If the substance is not used as a refrigerant, but z. B. used as a propellant, the R has often been replaced by the brand name.

If one of the numbers has the value zero, it is omitted from preceding values. The remaining binding sites on the carbon atoms are occupied by chlorine atoms.

They usually have one (K = 0) or two (K = 1) carbon atoms. If K is greater than 1, there is no pure substance, but a mixture of substances. The composition of such a mixture is not apparent directly from the sequence of digits. For example, R502 is a mixture of R22 and R115 in approximately equal parts.

Freon®, Frigen® or Solkane® with other halogens : If the substance contains a halogen other than fluorine and chlorine, its abbreviation, a letter and the number of atoms are added, e.g. B. with R13B1.

As halons are methane - or ethane - derivatives referred to, in addition to fluorine or chlorine and bromine contained. Halon (e) is not a brand name, but an abbreviation for halogenated hydrocarbon (e).

Analogous to the Freon , Frigen and Solkane notation, the following notation applies to halons:

When halon is not used as a refrigerant, the “R” in the name is often replaced by the word “halon” .