The halogens [ halogeːnə ] ("salt formers", from ancient Greek ἅλς háls " salt " and γεννᾶν gennãn "produce") form the 7th main group or, after a new grouping of the periodic table, group 17 in the periodic table of elements , which consists of the following six elements : Fluorine , chlorine , bromine , iodine , the extremely rare radioactive astatine and the very unstable Tenness which was artificially produced for the first time in 2010 . The group of halogens is on the right edge of the periodic table between the chalcogens (6th main group) and noble gases (8th main group).

These non-metals are very reactive in their elemental state ( fluorine can react under the appearance of fire ), colored and react with metals to form salts (origin of the name) and with hydrogen under normal conditions to form hydrogen halides (gaseous, single-protonic acids).

Fluorine , chlorine , bromine and iodine play important roles in chemistry , biology and medicine . Astat is used in organic compounds in nuclear medicine for the irradiation of malignant tumors .

Halogens occur in nature primarily as simply negatively charged anions in salts . The associated cation is usually an alkali or alkaline earth metal , and the sodium salts of halogens are particularly common. The halogens can then be obtained from these by means of electrolysis . A not inconsiderable part of the halides is dissolved in sea ​​water .

In contrast to the other halogens, iodine also occurs naturally as iodate . Astatine, the rarest naturally occurring element, is an intermediate product of the uranium and thorium decay series . The total amount in the earth's crust is only 25 g.

Extraction of the pure elements

Fluorine gas F 2 can only be obtained through electrochemical processes, as there is no element and no compound that has a higher redox potential than fluorine and could oxidize it (oxidation, because electron release of 2 F - to F 2 , other halogens analogous) .

All other halogens can be produced in addition to the electrochemical preparation (e.g. chlor-alkali electrolysis ) with oxidizing agents such as MnO 2 ( manganese dioxide), KMnO 4 ( potassium permanganate ).

Another possibility for obtaining bromine or iodine is to introduce chlorine gas as an oxidizing agent into concentrated bromide or iodide solutions:

The Deacon process should also be mentioned here for the production of chlorine ( redox reaction of hydrochloric acid gas with air as an oxidizing agent to form water and chlorine gas): 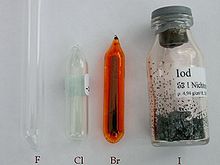 The four stable halogens: Your color decreases from fluorine to iodine to

Elemental halogens are colored, volatile to gaseous substances that are soluble in water (fluorine reacts). Their color intensity, boiling points and density increase with the atomic number. They are in the form of diatomic molecules of the form X 2 (e.g. F 2 and Cl 2 ) and are therefore non-conductors (insulators).

Halogens are very reactive non-metals , as they only lack a single valence electron to fully occupy the valence shell . Since the halogen-halogen bond is not very stable , halogen molecules also react violently. The reactivity , like the electronegativity , decreases from fluorine to iodine . At the same time, the 1st ionization energy increases upwards. However, the properties of astatine are largely unexplored, but it is likely very similar to iodine from a chemical point of view.

Iodine is hardly soluble in water and does not react.

In organic chemistry they are used for the synthesis of halogen compounds. The process is commonly referred to as halogenation .

By adding halogens to incandescent lamps, the tungsten-halogen cycle increases their service life and luminous efficiency. One then also speaks of halogen lamps . 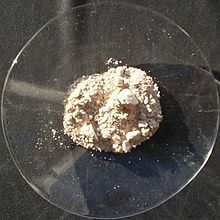 Ionic halogen compounds such as. B. the fluorides , chlorides , bromides and iodides are salty substances. Accordingly, they have high melting points , are brittle and electrical non-conductors except in melt and solution . Most halides are soluble in water (such as table salt, sodium chloride . Lead, mercury and silver halides (see hydrochloric acid group ) and copper (I) halides are insoluble in water. Many halides occur naturally in the form of minerals .

With the exception of fluorine , whose only oxygen acid is the unstable hypofluoric acid , the halogens form four types of oxygen acids, which are named as follows:

The strength of the acid increases with the number of oxygen atoms, as does the oxidizing effect. Most oxo acids of the halogens are very unstable and decompose to exothermic .

Interhalogen compounds are compounds of the halogens with one another. There are the following types (Y is the more electronegative element ):

There are also interhalide ions such as BrF 6 - and IF 6 - . Oxygen acid halides such as. B. Perchloryl fluoride ClO 3 F or Iodoxipentafluoride IOF 5 are known.