This article deals with the chemical element; for the Latin name of the city of Bari, see there.

Barium (from Greek βαρύς barýs , German ` ` heavy '' , because of the high density of the barium mineral barite ) is a chemical element with the element symbol Ba and the atomic number 56. In the periodic table it is in the sixth period and the 2nd main group or the 2nd .  IUPAC group and is therefore one of the alkaline earth metals . Barium oxide was first presented by Carl Wilhelm Scheele in 1774 . Barium is metallic, shiny and silvery-white in color. Because of its high reactivity, it does not occur elementally in nature; u. a. it is highly flammable. Water-soluble barium compounds are poisonous. 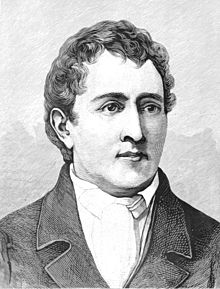 Minerals containing barium were examined for the first time in 1602 by the Italian shoemaker and alchemist Vincenzo Casciarolo (1571–1624), who noticed shiny stones that glowed in the dark after heating. They became known to a wider audience as the “Bolognese Stone” through the publications of Ulisse Aldrovandi . It was barite, which phosphoresces when heated with organic substances .

In 1774 the Swedish chemist Carl Wilhelm Scheele first identified barium oxide (BaO), which was initially called new alkaline earth , while studying gypsum . Two years later, Johan Gottlieb Gahn found the same connection in similar research. Also in the 18th century, the English mineralogist William Withering noticed a heavy mineral in lead mines in Cumberland , which could not be a lead ore and which he named " terra ponderosa ". It is known today as Witherite ( barium carbonate BaCO 3 ).

Metallic barium, but not in its pure form, was first produced in 1808 by Sir Humphry Davy in England by electrolysis of a mixture of barium oxide and mercury oxide. This was followed by the name barium after the barium mineral barite.

The first pure preparation of barium was achieved in 1855 by Robert Bunsen and Augustus Matthiessen by melt electrolysis of a mixture of barium chloride and ammonium chloride . In 1910 Marie Curie isolated the heavier radium using its chemical similarity to barium. The metal also played an important role in 1938 in the nuclear chemistry experiments of Otto Hahn and Fritz Straßmann , who bombarded uranium with slow neutrons and, to their astonishment, found the much lighter element barium in the reaction products. They correctly interpreted this finding as a split in the uranium nucleus. 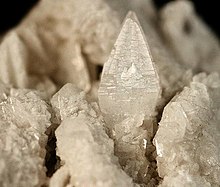 Because of its high reactivity, barium does not occur elementally in nature, but only in compounds. With a share of around 0.039%, barium is the 14th most common element in the earth's crust .

Barium is mainly found in the minerals barite (barite = crystallized barium sulfate) and withitherite (barium carbonate), with barite being the most common. The annual world production of barite rose from about 4.8 million tons to 6.7 million tons in the years 1973 to 2003, the worldwide reserves are estimated at about two billion tons. The German occurrences of barium compounds are in the Sauerland, Harz and Rhineland-Palatinate. The main producing countries of barium are the People's Republic of China , Mexico , India , Turkey , USA , Germany , Czech Republic , Morocco , Ireland , Italy and France .

Only a small part of barite is processed into barium metal. The sulfate is first reduced to sulfide. The barium sulfide is then converted into barium carbonate and further into barium oxide, which is finally reduced to the pure metal with silicon or aluminum at 1200 ° C in a vacuum. The reactions proceed according to the following equations:

The extraction of metal from barium carbonate is easier according to this scheme, but it is less common in nature. Highly pure barium is obtained from molten barium chloride by electrolysis with subsequent high vacuum sublimation.

Barium is a solid, paramagnetic alkaline earth metal that crystallizes in a body-centered cubic lattice . Its silver-white color quickly turns matt gray in the air because an oxide layer forms.

In terms of its chemical properties, it is similar to calcium and the other alkaline earth metals. It reacts more violently than most other alkaline earth metals with water and with oxygen and dissolves easily in almost all acids - with the exception of concentrated sulfuric acid , as the formation of a sulphate layer ( passivation ) stops the reaction. Barium can therefore be described as one of the most base metals. Because of this high reactivity, it is stored under protective liquids.

It reacts directly with halogens , oxygen, nitrogen and sulfur . It always forms compounds in which it is present as a divalent cation. When heated in air, the metal burns with the typical green flame color to form barium oxide.

As a very base metal, barium reacts with water to form hydrogen and hydroxide. Barium hydroxide is also already formed when the metal comes into contact with moist air.

In contrast to other alkaline earth metals, barium only forms a thin, poorly passivating oxide layer and can therefore self-ignite in moist air.

Stable barium isotopes arise from different series of decays, for example 137 I in 137 Ba. The radioactive isotopes break down into lanthanum , xenon , cesium and iodine isotopes .

The following are two examples of nuclear fission that produce radioactive isotopes of barium:

Uranium captures a slow neutron and breaks down into barium, krypton and three fast neutrons (first evidence of nuclear fission ).

In addition, the metastable isomer barium-137m can be produced from the decay of cesium -137 with a cesium-barium generator . Barium-137m decays with a half-life of 153.1 (1) seconds with the emission of gamma radiation to form stable barium-137.

Elemental barium is only used on a small scale, and production is only a few tons per year. The most important application is as getter material in vacuum tubes , for example of televisions or as solar collectors , because it quickly binds unwanted residual gases such as oxygen, nitrogen, carbon dioxide and water vapor ; unreactive gases are also trapped and thus removed from the vacuum tube. The vapor pressure of the metal is low at the temperatures used. Nickel alloyed with barium is also used in spark plugs . It also increases the hardness of lead alloys , which are used as bearing metals .

In connection with iron as barium ferrite (BaFe) it is used as a material for high-capacity magnetic tapes.

Plants take up barium cations from the soil and enrich them. The highest concentration in a useful plant is found in the Brazil nut with a proportion of 1% corresponding to 10,000 ppm (millionths of a proportion) .

Ornamental algae (Desmidiaceae), a family of unicellular green algae (Chlorophyta) about one millimeter in size , that occur in cold, nutrient-poor freshwater, especially in raised bogs , are really dependent on barium . In their cells there are fluid-filled cavities in which there are tiny crystals of barium sulfate. For this purpose, barium is evidently selectively withdrawn from the water even at vanishingly low concentrations of only 1  ppb , whereby even concentrations of the chemically similar alkaline earth metal calcium that are orders of magnitude above do not compete. The algae also tolerate barium concentrations of up to 35 ppm (parts per million), which are lethal for other organisms. Barium is essential for the algae because they stop growing when withdrawn. The biological function of the crystals is still unclear; a role in the perception of gravity is suspected.

Barium also occurs in the human body, the average tissue content is 100 ppb, in blood and bones it is somewhat lower at up to 70 ppb each. About one milligram of barium is ingested with food every day.

All water or acid soluble barium compounds are poisonous. The maximum workplace concentration (MAK value) is 0.5 mg / m 3 . A dose of 1 to 15 grams is fatal to an adult , depending on the solubility of the barium compound. The water-insoluble contrast agent barium sulfate used in radiology , which is used to depict the gastrointestinal tract or the act of swallowing in X-ray cinematography , must therefore be free of soluble barium compounds, i.e. it must be supplied as a pure substance. It should also be noted that the Latin terms “Barium sulfuricum” (barium sulfate) and “Barium sulfuratum” (barium sulfide) used in pharmacies' language can be confused. Barium poisoning mostly occurs at work or in the vicinity of barium-processing industries. It can be inhaled or enter the body through the drinking water.

Barium ions are deposited in the muscles, lungs and bones, into which it is absorbed, similar to calcium, but more quickly. Its half-life in bone is estimated to be 50 days. As a competitor of calcium on cell membranes , it increases - at low doses - membrane permeability and strengthens muscle contraction. This can lead to an increase in blood pressure with a lowering of the heart rate and to muscle cramps . Higher doses cause muscle weakness and even paralysis , also due to impairment of the central nervous system . Cardiac arrhythmias ( extrasystole and ventricular fibrillation ), tremor , general weakness, dizziness , anxiety and breathing problems can occur. In acute and subacute poisoning, gastrointestinal disorders such as abdominal pain, vomiting and diarrhea can occur. In high concentrations, barium blocks the passive potassium channels in the cell membrane of the muscle cells , so that potassium can no longer leave the muscle cells. Since the sodium-potassium-ATPase pumps potassium into the cells undiminished, the potassium level in the blood drops . The resulting hypokalemia causes the failure of the muscle reflexes ( areflexia ) with subsequent muscle and respiratory paralysis .

First aid can be given by administering sodium sulphate or potassium sulphate solution, which binds the barium ions as barium sulphate , which is poorly soluble and therefore non-toxic. In the hospital, barium can be removed by dialysis .

If barium is in company with other elements that also form sparingly soluble sulfates, this process cannot be used. If only alkaline earth elements are present, separation and verification are carried out according to the chromate-sulfate process (see under ammonium carbonate group ). As part of this process, potassium chromate solution is added to the barium solution, and a yellow precipitate of barium chromate is formed . If other elements with sparingly soluble sulfates are also present, a suitable cation separation process must be carried out.

A method suitable for detecting barium is atomic spectroscopy . The detection of barium and barium salts takes place via the characteristic spectrum . With a flame atomic absorption spectrometer or an atomic emission spectrometer with inductively coupled high-frequency plasma, even small traces of barium can be detected. With the classic detection, the sample is held in a Bunsen burner flame and the green color of the flame is observed. However, this method is ambiguous when there are elements with similar flame colors. 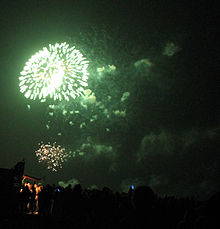 Fireworks: Green color of the barium

Barium compounds are almost exclusively in the + II oxidation state . These are mostly colorless, salty solids. The green color of the flame is characteristic of barium compounds.

With halogens, barium forms compounds of the type BaX 2 , which crystallize in the lead (II) chloride structure. Barium fluoride , which crystallizes differently in the fluorite structure , has a wide transparent spectral range and is used in the optical industry. The poisonous and readily soluble barium chloride is the basic material for other barium compounds and serves as a precipitant for sulfate , for example for detection or for water softening.

Barium sulfate is the technically most important barium compound. Compared to other barium compounds, it has the advantage of being non-toxic due to its very low solubility. It is mainly used in oil production to increase the density of drilling mud . It also serves as a filler for plastics , as an X-ray contrast medium and is used as a paint .

Barium carbonate is an effective rat poison , it is also used as a raw material for glass manufacture and in the production of hard magnetic ferrites .

Barium nitrate , barium iodate and barium chlorate are used in pyrotechnics because of their fire-promoting properties and the green color of the flame .