Seaborgium is an exclusively artificially produced chemical element with the element symbol Sg and the atomic number 106. It is one of the transactinoids ( 7th period , d-block). In the periodic table of the elements it is in the 6th  IUPAC group , the chromium group . All seaborgium isotopes are radioactive. It was first produced in 1974, around the same time at the Dubna Nuclear Research Center ( Soviet Union ) and at the University of California, Berkeley .

The synthesis of the 106th element succeeded in June 1974 Soviet scientists working with Georgi N. Fljorow and Juri Z. Oganesjan at the nuclear research center in Dubna. With a heavy ion accelerator, a beam of chromium ions with an intensity of 200 billion particles per second and an ion energy of 280 MeV was aimed at a target material made of lead of various mass numbers. The formation of nuclei could be demonstrated, the spontaneous decay of which could be assigned to element 106. However, this study was not considered to be a significant indicator for element 106.

Three months later, in September 1974, American scientists in the working group led by Albert Ghiorso and Glenn T. Seaborg also announced the success of their efforts. They bombarded Californium with oxygen nuclei:

Neither the Soviet nor the American scientists proposed a name in the years that followed, because they were obviously tired of continuing the "name war". Only recently has seaborgium been proposed; a naming that was confirmed by IUPAC in 1997. 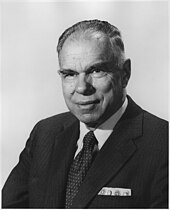 After the discovery, the element was initially given the systematic name Unnilhexium (Unh from Latin unus “one”, nil “zero” and Greek hexa “six”), corresponding to the ordinal number 106. It was also known as Eka - Wolfram (Sanskrit eka ' one ', and Wolfram, so "one under Wolfram"). In 1997, after the element naming controversy, it was given its current name, which was given in honor of the American chemist Glenn T. Seaborg. Seaborgium is the first element named after a scientist while he was still alive. Glenn T. Seaborg died on February 25, 1999. The name Oganesson was proposed for element 118 after Yuri Z. Oganesjan and officially awarded on November 30, 2016.

Seaborgium is an artificially produced, radioactive element of the 7th period, which can be assigned to the 6th subgroup, in which tungsten is the next lighter element. It has the relative atomic mass of 263.1182. Little is known about its properties, as it disintegrates again within a short time and is difficult to investigate. It is estimated that the melting point of seaborgium is 2800 ° C and the boiling point is 6500 ° C.

The element was produced solely for research purposes and has no further meaning.

There is no classification according to the CLP regulation or other regulations because only a few atoms of this element can be produced at the same time and thus far too few for a chemical or physical hazard.