Rhenium is a chemical element with the element symbol Re and the atomic number 75. In the periodic table of the elements it is in the 7th subgroup (group 7) or manganese group . It is a very rare, silver-white, shiny, heavy transition metal . Alloys with rhenium components are used in aircraft engines , as catalysts in the manufacture of unleaded gasoline and in thermocouples .

Biological functions of rhenium are not known, it does not normally occur in the human organism . The metal is also not known to have any toxic effects; it is considered to be harmless in terms of occupational hygiene.

The existence of the later rhenium was first predicted in 1871 by Dmitri Ivanovich Mendeleev as dwi - manganese . From the regularities of the periodic table he designed, he concluded that below manganese there must be two as yet unknown elements, later called technetium and rhenium.

Rhenium was only discovered in 1925 by Walter Noddack , Ida Tacke and Otto Berg . They examined columbite to find the elements they were looking for, Eka and Dwi manganese. Since the samples contained only a very small amount of the elements sought, they had to be enriched by separating the other components. Finally, the later rhenium could be detected by X-ray spectroscopy. Noddack and Tacke also claimed to have found very small amounts of the eka manganese (later technetium), but this could not be confirmed by representation of the element. They named the elements after their home regions Rhenium ( Latin Rhenus for Rhine ) and Masurium (from Masuria ). However, the latter did not prevail after the discovery of technetium in 1937.

In 1928, Noddack and Tacke were able to extract one gram of rhenium from 660 kilograms of molybdenum ore for the first time. Because of the high costs, the production of significant quantities did not begin until 1950, when there was a greater need for newly developed tungsten- rhenium and molybdenum- rhenium alloys.

With a proportion of only 0.7  ppb in the continental crust, rhenium is rarer than rhodium , ruthenium and iridium . It does not occur naturally , but is exclusively bound in some ores. Since rhenium has similar properties to molybdenum , it is mainly found in molybdenum ores such as molybdenum luster MoS 2 . These can contain up to 0.2% rhenium. Further rhenium-containing minerals are columbite (Fe, Mn) [NbO 3 ], gadolinite Y 2 FeBe [O | SiO 4 ] 2 and Alvit ZrSiO 4 . The Mansfeld copper slate also contains small amounts of rhenium. The largest deposits of rhenium-containing ores are in the United States , Canada and Chile .

So far, only one was Rheniummineral which rheniite (rhenium (IV) sulphide, Res 2 ), discovered. It was found in a fumarole on the summit crater of the Kudrjawy volcano (Russian: Кудрявый) on the island of Iturup , which belongs to the Kuril Islands ( Russia ).

The basic material for the extraction of rhenium are molybdenum ores, especially molybdenite . If these are roasted in the course of molybdenum extraction , rhenium accumulates as volatile rhenium (VII) oxide in the fly ash . This can be converted into ammonium perrhenate (NH 4 ReO 4 ) with ammonia-containing water .

The ammonium perrhenate is then reduced to elemental rhenium using hydrogen at high temperatures .

Rhenium is a shiny white, hard heavy metal that looks similar to palladium and platinum . It crystallizes in a hexagonal close packing of spheres in the space group P 6 3 / mmc (space group no. 194) with the lattice parameters a  = 276.1 pm and c  = 445.8 pm as well as two formula units per unit cell . The very high density of rhenium of 21.03 g / cm 3 is only exceeded by the three platinum metals osmium , iridium and platinum. Template: room group / 194

At 3186 ° C, rhenium has one of the highest melting points of all elements. It is only surpassed by the highest-melting metal tungsten (3422 ° C) and carbon. The boiling point of rhenium at 5630 ° C is the second highest of all elements after that of tungsten at 5930 ° C. Below 1.7 K, rhenium becomes a superconductor .

Rhenium can be easily processed by forging and welding , as it is ductile and, unlike tungsten or molybdenum, remains this even after recrystallization . When welding rhenium, there is no embrittlement that would lead to greater brittleness and thus poorer material properties.

Although rhenium with a negative standard potential is not a noble metal , it is unreactive at room temperature and stable to air. Only when heated does it react with oxygen above 400 ° C to form rhenium (VII) oxide. It also reacts with the non-metals fluorine , chlorine and sulfur when heated.

Rhenium is not soluble in non-oxidizing acids such as hydrochloric acid or hydrofluoric acid. In contrast, the oxidizing sulfuric and nitric acids dissolve rhenium easily. With oxidation melts easily colorless perrhenates (VII) form the shape of ReO 4 - or green rhenates (VI) of the type ReO 4 2- .

As a powder, rhenium is a flammable solid. It can be easily ignited by brief exposure to an ignition source and continues to burn after its removal. The more finely the substance is distributed, the greater the risk of ignition. The moist powder is gradually oxidized at room temperature with the formation of perrhenic acid.

A total of 34 isotopes and a further 20 core isomers of rhenium are known. Of these, two, the isotopes 185 Re and 187 Re, occur naturally. 185 Re, which accounts for 37.40% of the natural isotope distribution, is the only stable isotope. The more common 187 Re with a share of 62.60% is weakly radioactive . It decomposes with beta decay with a half-life of 4.12 · 10 10 years to 187 Os, which leads to a specific activity of 1020  becquerels / gram. Along with indium, rhenium is one of the few elements that have a stable isotope, but are most frequently found in their radioactive form in nature. Both isotopes can be detected with the aid of nuclear magnetic resonance spectroscopy . Of the artificial isotopes, 186 Re and 188 Re are used as tracers . As the main beta emitter , 186 Re is used in nuclear medicine for therapy in radiosynoviorthesis . 188 Re is used as a radioactive drug in tumor therapy .

The decay of 187 Re to 187 Os is used as a rhenium-osmium method in geology for isotopic age determination of rocks or minerals . The isochronous method is used to correct the previously existing osmium .

Rhenium is usually not used as an element, but is used as an admixture in a large number of alloys. About 70% of the rhenium is used as an additive in nickel superalloys . An addition of 4 to 6% rhenium improves the creep and fatigue behavior at high temperatures. These alloys are used as turbine blades for aircraft engines.

Another 20% of the rhenium produced is used for platinum-rhenium catalysts . These play a major role in increasing the octane number of unleaded gasoline through reforming ("rheniforming"). The advantage of rhenium is that, compared to pure platinum, it is not deactivated as quickly by carbon deposits on the surface of the catalyst (“ coking ”). This makes it possible to carry out production at lower temperatures and pressures and thus to produce more economically. Other hydrocarbons , such as benzene , toluene and xylene , can also be produced with platinum-rhenium catalysts.

Thermocouples for temperature measurement at high temperatures (up to 2200 ° C) are made of platinum-rhenium alloys. As an alloy with other metals, such as iron , cobalt , tungsten, molybdenum or precious metals, rhenium improves resistance to heat and chemical influences. However, its use is limited by the rarity and high price of rhenium.

Rhenium is also used in some special applications, for example for hot cathodes in mass spectrometers or contacts in electrical switches .

There are several ways to detect rhenium. Spectroscopic methods are one possibility . Rhenium has a pale green flame color with characteristic spectral lines at 346 and 488.9 nm. Rhenium can be detected gravimetrically via the characteristically crystallizing perrhenic acid or various perrhenate salts, such as tetraphenylarsonium perrhenate. Modern analytical methods such as mass spectrometry or nuclear magnetic resonance spectroscopy are also suitable for the detection of the element.

Like many metals, rhenium in powder form is highly flammable and combustible. No water may be used for extinguishing because of the hydrogen produced. Instead, extinguishing agents or metal fire extinguishers should be used. Compact rhenium, on the other hand, is non-flammable and harmless. Rhenium has no known biological significance for the human organism. Although no more precise information is known about the toxicity of rhenium and no toxicity values ​​exist, rhenium is considered safe in terms of occupational hygiene. 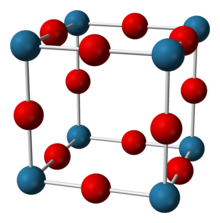 A total of five oxides of rhenium are known, the yellow Re 2 O 7 , red ReO 3 , Re 2 O 5 , brown-black ReO 2 and Re 2 O 3 . Rhenium (VII) oxide Re 2 O 7 is the most stable rhenium oxide. It is an intermediate product in the production of rhenium and can be used as a starting compound for the synthesis of other rhenium compounds such as methyltrioxorhenium . It dissolves in water to form the stable perrhenic acid HReO 4 . Rhenium (VI) oxide ReO 3 has a characteristic crystal structure that serves as a crystal structure type (rhenium trioxide type).

A total of 13 compounds of rhenium with the halogens fluorine , chlorine , bromine and iodine are known. Rhenium reacts preferentially to form hexahalides of the ReX 6 type . This creates pale yellow rhenium (VI) fluoride ReF 6 and green rhenium (VI) chloride ReCl 6 directly from the elements at 125 ° C and 600 ° C, respectively. Reaction of rhenium with fluorine under slight pressure at 400 ° C leads to light yellow rhenium (VII) fluoride , besides osmium (VII) fluoride and iodine (VII) fluoride the only known halide in the + VII oxidation state. Red-brown rhenium (V) chloride (ReCl 5 ) 2 has a dimeric, octahedral structure. Chlorination of ReO 2 with thionyl chloride produces a black, polymeric chloride Re 2 Cl 9 , which consists of chains of dimeric Re-Cl clusters that are bridged by chlorine atoms. If higher rhenium chlorides are thermally decomposed at over 550 ° C, dark red, trimeric rhenium (III) chloride Re 3 Cl 9 is formed . Structurally, its molecules consist of triangular metal clusters, the Re-Re distances of 248 pm proving the double bond character of the metal-metal bonds. The halides are sensitive to water and react with water to form halogen oxides or oxides.

Rhenium forms a variety of complexes . Both classical complexes with individual metal centers and metal clusters are known. In these, rhenium-rhenium multiple bonds are sometimes also in the form of triple or quadruple bonds . A quadruple bond exists in the Re 2 X 8 2− complex ion (X is a halogen atom or a methyl group ).

Also organometallic compounds of rhenium are known. An important organic rhenium compound is methylrhenium trioxide (MTO), which can be used as a catalyst for metathesis reactions , for the epoxidation of olefins and for the olefination of aldehydes . MTO and other rhenium catalysts for metathesis are particularly resistant to catalyst poisons .

The synthetic compound of rhenium and boron (ReB 2 , rhenium diboride ) is harder than diamond along a crystal axis.