The title of this article is ambiguous. Further meanings are listed under boron (disambiguation) .

Boron is a chemical element with the element symbol B and the atomic number 5. In the periodic table it is in the 3rd main group , or the 13th  IUPAC group , the boron group , and the second period . The trivalent rare semimetal occurs in the form of its oxygen compounds as borax and kernite in some minable deposits. Boron exists in several modifications: Amorphous boron is a brown powder, several allotropic modifications of crystalline boron are known.

Boron compounds have many uses in various branches of industry. The detergent industry uses boron compounds such as sodium perborate as bleaching agents on an industrial scale . The glass industry uses boron in the form of its borax compounds for the production of glasses and ceramics with high chemical resistance and thermal shock resistance. Elemental boron is used for doping in the semiconductor industry. Boron polymers and ceramics play a role in the manufacture of high-strength lightweight and refractory materials. Boron carbide has a high hardness and is used as an abrasive. For brazing boron compounds are used as flux used. In hydroboration , boron reagents are used for the synthesis of fine organic chemicals . Natural boron consists of two stable isotopes , 10 of which boron is suitable as a neutron absorber .

Borates have low toxicity to mammals , but are poisonous to arthropods and are used as insecticides. Boric acid has a weak antimicrobial effect; natural antibiotics containing boron are known. Boron is possibly an essential trace element . In agriculture , irrigation improves the stabilization of the plant cell walls and has an important function in cell division, cell differentiation, cell elongation and tissue formation in plants as well as in nucleic acid metabolism , protein synthesis and energy metabolism .

Boron compounds (from Persian بوره bura h via arabic بورق buraq and Greek βοραχου or Latin borax "borsaures Natron", " Borax ") have been known for thousands of years. In ancient Egypt , the mineral sodium bicarbonate was used for mummification , which contains other compounds and borates. Borax glass has been used in the Chinese Empire since the 4th century . Boron compounds were used to make glass in ancient Rome .

Until 1808 presented Joseph Louis Gay-Lussac and Louis Jacques Thénard boron by reduction of boron trioxide with potassium, independently of this, a little later Sir Humphry Davy by electrolysis ago by boric acid. In 1824 Jöns Jakob Berzelius recognized the elementary character of the material. The American chemist W. Weintraub succeeded in preparing pure crystallized boron in 1909 by reducing gaseous boron trichloride with hydrogen in an electric arc .

Like the two elements lithium and beryllium in the periodic table, boron is a remarkably rare element in the solar system. The rarity of these three elements is explained by the fact that they are not products of the stellar nuclear fusions that lead to the formation of the elements ( nucleosynthesis ). The hydrogen burning leads to helium atoms, the subsequent helium burning (the three-alpha process ) leads to carbon atoms. Boron is only produced by the spallation of heavy atomic nuclei through cosmic rays .

Boron only occurs in compounds containing oxygen on earth. Large deposits are located in Bigadiç , a district in the Balıkesir Province in western Turkey , on the Mojave Desert in the USA and in Argentina . Staßfurt potash salts contain small amounts of associated boracite .

The largest borate mines are located at Boron, California (the Kramer deposit ) and in Kırka, Turkey. The minerals borax, kernite and colemanite are mined .

The content in groundwater and in inland waterways in Germany is in the range of 10 to 50 μg / l, with a background value (without anthropogenic influence) in the groundwater of 50 μg / l being assumed in Baden-Württemberg.

In Switzerland, natural boron levels in river water of around 10 μg / l and in groundwater of up to 40 μg / l are assumed, while the actual values ​​in rivers and lakes can be over 200 μg / l and drinking water around 20 μg on average / l and a maximum of 60 μg / l boron.

Plants need boron and the dry matter content is 30–75 ppm. Humans ingest boron from drinking water and food. The body has a level of around 0.7 ppm.

Amorphous boron is made by reducing boron trioxide, B 2 O 3 , with magnesium powder:

Boron obtained in this way has a purity of 98% after the impurities have been separated off. The purity of the substance can be increased by crystallizing the boron as a pure substance from a platinum melt at 800–1200 ° C.

Crystalline boron can also be produced using other methods: The element can usually be obtained as a pure substance from its halides . Using a 1000–1400 ° C hot tungsten or tantalum wire , the element can be produced in very high purity by reducing boron trichloride or boron tribromide with hydrogen . In order to reduce boron trifluoride with hydrogen, reaction temperatures of 2000 ° C would be required, so that this compound is not used as a starting material for the preparation.

Another possibility is the thermal decomposition of diborane at 600–800 ° C or of boron triiodide at 800–1000 ° C on a tantalum, tungsten or boron nitride surface.

α-tetragonal boron (also referred to as γ-boron), the first crystalline form of boron shown, contains 50 boron atoms in the unit cell (according to the formula (B 12 ) 4 B 2 ), but can also, for example, depending on the manufacturing conditions, as an inclusion compound B 50 C 2 or B 50 N 2 . In α-tetragonal boron free from foreign atoms, a single boron atom always connects four B 12 icosahedra. Each icosahedron has connections to two individual boron atoms and ten other icosahedra. Since the first description of this structure, it has never been possible to produce this modification in pure form. It is now assumed that pure α-tetragonal boron does not exist in the structure described.

The elementary boron is black, very hard and a poor conductor at room temperature. It does not occur in nature.

Researchers at the ETH in Zurich produced an ionic crystal from extremely pure boron . To do this, the material had to be exposed to a pressure of up to 30 gigapascals and a temperature of 1500 ° C. The same working group has meanwhile published an addendum according to which they describe the bonding situation in this modification as covalent.

In 2011, a research team at the University of Bayreuth succeeded in clearly identifying α-rhombohedral boron as a thermodynamically stable phase of boron. A series of different boron crystals were synthesized in high pressure laboratories at temperatures up to 2300 Kelvin and pressures up to 15 gigapascals . Of particular interest for research and for industrial applications, such as semiconductor technology , are α-boron single crystals . 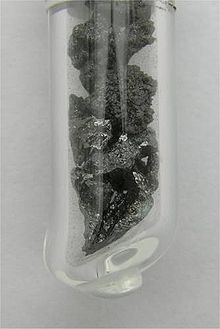 Because of the high ionization no B is boron 3+ - cations known. The complicated structures in many boron compounds and their properties show that the description of the bonding relationships as covalent , metallic or ionic is very simplistic and must be replaced by a molecular orbital (MO) approach .

The electron configuration 1s 2 2s 2 2p 1 of boron shows that only the three electrons of the second shell are available for the formation of covalent bonds with s, p x , p y and p z orbitals. This lack of electrons is compensated for by the formation of multi-center bonds , in particular a three- center bond , and electron acceptor behavior ( Lewis acidity ). It has been possible to produce a boron compound with a boron-boron triple bond .

Boron is permeable to infrared light . At room temperature it shows a low electrical conductivity, which increases sharply at higher temperatures.

Boron has the highest tensile strength of all known elements and the second highest hardness , only surpassed by the carbon modification diamond . Boron modifications are physically and chemically similar to hard ceramics such as silicon carbide or tungsten carbide .

If B 2 O 3 is dissolved in water, the very weak boric acid is formed. Their volatile esters , most clearly trimethyl borate , give flames a strong green color.

The ability of boron to form stable spatial networks via covalent bonds is a further indication of the chemical similarity of boron to its period neighbors, carbon and silicon .

An important research discipline of today's inorganic chemistry is that of the compounds of boron with hydrogen ( boranes ) as well as with hydrogen and nitrogen, which are similar to hydrocarbons ( isoelectronic ), e.g. B. Borazole B 3 N 3 H 6 ("inorganic benzene"). A number of organic boron compounds are known, for example boronic acids .

A total of 13 isotopes between 6 B and 19 B of boron are known. Of these, two, isotopes 10 B and 11 B, are stable and occur in nature. The isotope with the greater proportion of the natural isotope composition is 11 B with 80.1%, 10 B has a proportion of 19.9%. All artificial isotopes have very short half-lives at most in the millisecond range.

The economically most important compound is borax (sodium tetraborate decahydrate, Na 2 B 4 O 7  · 10 H 2 O) for the production of insulating and insulating materials as well as bleaching materials ( perborates ). Other uses:

Boron is possibly an essential trace element that has a positive influence on bone metabolism and brain function, among other things.

Humans ingest boron from drinking water and food. The body has a level of around 0.7 ppm. In a 1998 study, the World Health Organization (WHO) established that an average intake of 1–2 mg boron per day worldwide can be assumed and recommends a guideline value of 2.4 mg / l drinking water.

Plants are sometimes very sensitive to boron, so that certain sensitive plants (willows, fruit trees, artichokes) tend to develop boron chlorosis at concentrations of more than 1 mg / l boron (clinical picture characterized by the increased formation of brown spots) and can eventually die. Plants are also sensitive to too little boron; the dry matter content is usually between 30 and 75 ppm.

Bortezomib is the first medicine to contain boron. It is the first available proteasome - inhibitor which heals the since 2008 for multiple myeloma is approved. The highly specific and high affinity binding to the catalytic site of the 26S proteasome takes place via the boron.

Since the supply of boron through food and drinking water is usually sufficient and an additional benefit from nutritional supplements containing boron is unproven, we advise against their use in view of the possible risks.

Elemental boron is not toxic in small doses . There is no evidence of genotoxic or carcinogenic effects for boron; The German Nutrition Society does not list a reference value for boron as a recommended intake.

However, doses over 100 mg / day can cause symptoms of intoxication. The US American authority EPA specifies a daily limit value (RfD - Reference Dose) of 0.2 mg per kilogram of body weight for boron and borates, but does not assume that they are carcinogenic .

Boron trioxide , boric acid and borates have been classified as toxic to reproduction with the 30th ATP in the EU since summer 2009. In the case of boric acid and borax , however, this effect has so far only been observed when higher doses are administered to mice.

Some boron compounds such as boranes ( boron hydrogen compounds) are highly toxic and must be handled with great care.

Boron can be quantitatively detected in analytical chemistry with the curcumin method in the form of the red complex rosocyanine , or with the additional use of oxalic acid through the color reaction to rubrocurcumin . For this purpose, a sample of the boron-containing material is digested by oxidation. The boric acid formed by the digestion can then be determined colorimetrically .