Rhodium is a chemical element with the element symbol Rh and the atomic number 45. It is a silver-white, hard, unreactive transition metal . In the periodic table it belongs to the 9th group or cobalt group together with cobalt , iridium and meitnerium . Rhodium is very similar to other platinum metals such as platinum or palladium . This concerns, for example, the low reactivity and high catalytic activity characteristic of noble metals .

Rhodium is therefore mainly used as a catalyst , often in the form of alloys . As an important component of vehicle catalytic converters , it is used to reduce nitrogen oxides . Rhodium catalysts are also used in industrial processes for the production of some chemical raw materials, such as the Ostwald process for nitric acid production. Since the metal occurs very rarely in nature and at the same time is widely used, it is one of the most expensive metals of all.

Rhodium does not normally occur in the human body and its biological meaning is unknown.

Rhodium was discovered in 1803 by William Hyde Wollaston in a raw platinum ore from South America. In the same ore, three other platinum metals, palladium , iridium and osmium , were discovered by Wollaston and Smithson Tennant . To do this, they first dissolved the ore in aqua regia . A soluble fraction and a black residue formed in which Tennant found osmium and iridium. Wollaston precipitated rhodium and some other components with zinc powder from the aqua regia solution . After the copper and lead had been separated with dilute nitric acid , redissolved in aqua regia and sodium chloride was added, Na 3 [RhCl 6 ] · n H 2 O was formed, which remained as a pinkish-red salt when the liquid evaporated. From this, Wollaston was able to obtain the elemental rhodium by extraction with ethanol and reduction with zinc. The name was chosen by Wollaston after the Greek ancient Greek ῥόδεος rhódeos , German 'rose-colored' , as many rhodium compounds show this color.

The first use of the new metal was in the tips of nibs in 1820 , for which rhodium- tin alloys were used. However, these were later replaced by harder osmium-iridium alloys.

After rhenium , rhodium, along with ruthenium and iridium, is one of the rarest non-radioactive metals in the continental crust . Its proportion is only 1  ppb . Rhodium is found in nature dignified and has therefore as an independent mineral recognized. Locations include the type locality Stillwater in Montana and Goodnews Bay in Alaska . Rhodium is associated with other platinum metals and gold , among other things .

In addition to the elementary rhodium some Rhodiumminerale as are Bowieit , Genkinit or Miassit known. However, like elemental rhodium, these are very rare and do not play a role in extraction. The most important deposits of the element are in sulphidic nickel - copper ores, which occur mainly in South Africa , Sudbury ( Canada ) and Siberia . Significant amounts of rhodium are also found in Mexican gold deposits. Rhodium is obtained together with the other platinum metals when processing these ores and must then be separated from them. 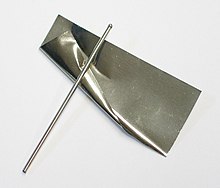 The extraction of rhodium, like that of the other platinum metals, is very complex. This is mainly due to the similarity and low reactivity of the platinum metals, which makes them difficult to separate. The starting material for the extraction of rhodium is anode sludge , which is a by-product of electrolysis in copper and nickel production. This is first dissolved in aqua regia . Here go gold , platinum and palladium in solution while ruthenium , osmium , rhodium and iridium and silver as silver chloride remain unresolved. The silver chloride is converted into soluble silver nitrate by heating with lead carbonate and nitric acid and so separated.

In order to separate the rhodium from the other elements, the residue is melted with sodium hydrogen sulfate . This forms water-soluble rhodium (III) sulfate Rh 2 (SO 4 ) 3 , which can be leached with water. The dissolved rhodium is first precipitated as rhodium hydroxide Rh (OH) 3 with sodium hydroxide . The following reaction steps are the dissolving in hydrochloric acid as H 3 [RhCl 6 ] and the precipitation with sodium nitrite and ammonium chloride as (NH 4 ) 3 [Rh (NO 2 ) 6 ]. In order to obtain elemental rhodium, the soluble (NH 4 ) 3 [RhCl 6 ] complex is formed from the residue by digestion with hydrochloric acid . After the water has been removed by evaporation, the rhodium can be reduced to metal powder with the help of hydrogen .

Reaction of ammonium hexachlororhodate with hydrogen to form rhodium

Rhodium isotopes arise as by-products of the nuclear fission of 235 U and can be extracted from spent fuel elements . However, due to the radioactivity , there is still no commercial application of the rhodium obtained in this way.

Rhodium is only extracted to a small extent; in 2005 production was 23.5 tons. 83.2% of the total production took place in South Africa . The second largest producing country was Russia (11.9%), followed by Canada and Zimbabwe .

A piece of rhodium weighing 78 g.

Rhodium is a silver-white, high-melting, hard precious metal . It is harder than gold or platinum, but it is tough and ductile and can be worked by hammering. In most of its properties it is comparable to the other platinum metals . The melting point of rhodium of 1966 ° C is between that of platinum (1772 ° C) and ruthenium (2334 ° C). The density of the element of 12.41 g / cm 3 is comparable to that of the neighboring elements ruthenium and palladium. Rhodium has the highest thermal and electrical conductivity of all platinum metals. Below 0.9 Kelvin, rhodium becomes a superconductor .

Like cobalt and iridium, rhodium crystallizes in a cubic close packing of spheres ( copper type) in the space group Fm 3 m (space group no. 225) with the lattice parameter a = 380.4 pm and four formula units per unit cell . Template: room group / 225

As a typical precious metal, rhodium is very inert. It is the least reactive platinum metal after iridium. It only reacts with oxygen and chlorine at temperatures of 600 to 700 ° C to form rhodium (III) oxide or rhodium (III) chloride . Even the most reactive halogen, fluorine , only reacts to rhodium (VI) fluoride when exposed to heat . The metal is not attacked by mineral acids . An exception is finely divided rhodium, which dissolves very slowly in aqua regia and concentrated sulfuric acid .

The metal reacts with some molten salts and can thus be unlocked. Salts that can do this are sodium hydrogen sulfate , potassium disulfate , cyanides and sodium carbonate .

Oxygen dissolves in liquid rhodium (> 2000 ° C). When the melt cools, it is released again with splattering . A reaction does not occur because the oxides are unstable above ~ 1100 ° C.

Like other platinum metals, rhodium has a catalytic effect in many processes . Both the metal and its compounds and alloys with other platinum metals are therefore used accordingly. There are also other rhodium-specific applications; however, its use is limited by its high price.

The most important areas of application for rhodium are vehicle catalysts . It serves as a catalyst for the reduction of nitrogen monoxide to elemental nitrogen . If platinum or palladium were used instead , more ammonia and nitrous oxide would be produced.

Some of the rhodium is used in catalysts for the production of nitric acid . In the so-called Ostwald process , nets made of a platinum-rhodium alloy with around 10% rhodium are used for the catalytic combustion of ammonia to form nitrogen monoxide. The use of rhodium increases the durability and yield compared to pure platinum. A rhodium-platinum alloy is also used as a catalyst in the Andrussow process for hydrogen cyanide production. 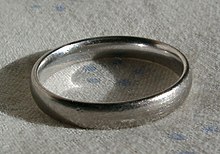 Metallic rhodium can be used as a coating . Surfaces coated with rhodium have a high reflectivity and are therefore suitable as high-quality mirrors. At the same time, these coatings are very hard and chemically stable. Rhodium is also used as a coating for jewelry, glasses frames or watches. It prevents tarnishing of the metal used. This is especially important with jewelry made of silver or white gold . The process of coating is called rhodium plating.

Other possible applications are highly stressed laboratory equipment, heating coils or thermocouples made from platinum-rhodium alloys. Since precious metals have come back into the focus of international financial investors, there have also been physical rhodium investment products. Due to the later use in industry after the buyback, rhodium is mostly offered in powder form. Since 2012, plant rhodium has also been available in ingot form.

Compact rhodium is harmless due to its low reactivity, but as a finely divided powder it is easily flammable and combustible. Since burning rhodium reacts with water, only metal fire extinguishers (class D) may be used for extinguishing . Due to some indications of a carcinogenic effect, rhodium and its compounds are classified in carcinogen category 3b.

Like other heavy metal ions, dissolved rhodium ions are toxic in high concentrations. In a study with lung epithelial cells , an LC 50 value of 1.2 mmol · l −1 was determined for rhodium (III) ions.

Rhodium forms compounds in the oxidation states from −I to + VI. The most stable level is + III, higher levels occur mainly in compounds with fluorine , lower levels in complexes with ligands such as carbon monoxide , cyanide or phosphanes .

Some rhodium compounds, such as rhodium (II) carboxy complexes , are being investigated to determine whether they can be used to treat cancer . Like those of platinum, the compounds are very often toxic to the kidneys.

Some rhodium complexes are used as catalysts in technically important syntheses of organic chemicals . These include the Wilkinson catalyst , a square-planar rhodium complex with three triphenylphosphane (PPh 3 ) - and a chloride - ligands . One reaction that this complex catalyzes is the hydrogenation of alkenes with hydrogen . It is also possible to replace the ligands with chiral groups and thus achieve an asymmetric hydrogenation. This is used, among other things, for the synthesis of the amino acid L -DOPA . Another important reaction that uses the Wilkinson catalyst is hydroformylation . Aldehydes are prepared from alkenes, carbon monoxide and hydrogen.

Catalyst in the Monsanto process

A number of compounds are known with the halogens fluorine , chlorine , bromine and iodine . While chlorine, bromine and iodine only form compounds in the + III oxidation state, the fluorides rhodium (IV) fluoride , rhodium (V) fluoride and rhodium (VI) fluoride are known. The most important rhodium-halogen compound is rhodium (III) chloride , which can be used as a catalyst in reductions , polymerizations or isomerizations .

Rhodium (III) sulfate Rh 2 (SO 4 ) 3 is an intermediate product in rhodium production. It is also used as a raw material for the galvanic coating of surfaces, for example in jewelry.

Rhodium (II) acetate is used as a catalyst in organic chemistry. It forms with diazo that an adjacent carbonyl possess carbenes . Cyclopropanes , among other things, can be prepared from the carbenes . Rhodium carbenes can also be used for the production of ylides and for insertion reactions .