Neptunium is a chemical element with the element symbol Np and the atomic number 93. In the periodic table it is in the group of actinides ( 7th period , f-block ). Neptunium is the first of the so-called transuranic elements , which, apart from traces of neptunium and plutonium , no longer occur naturally on earth . Neptunium is a toxic and radioactive heavy metal . It was named after the planet Neptune , which succeeds the planet Uranus . Neptunium follows uranium in the periodic table , followed by plutonium, the naturally occurring element on earth with the highest atomic number.

Neptunium is the first of the so-called transuranic elements , the existence and properties of which have long been controversial among physicists.

Already in Mendeleev's periodic table of elements from 1871 there was a gap behind uranium, the heaviest known element at the time.

More than sixty years later, Ida Noddack commented in May 1934 on the gaps in Mendeleev's periodic table that existed at the time and, at the end of her work, considered the possibility of transuranics. A few weeks later, Enrico Fermi published three papers on this topic. In September 1934, Noddack took a critical look at the supposed discovery of element 93 by Fermi. In her remarks she took u. a. the discovery of neutron-induced nuclear fission in advance: “It is conceivable that when heavy nuclei are bombarded with neutrons, these nuclei disintegrate into several larger fragments, which are isotopes of known elements, but not neighbors of the irradiated elements. “Regardless of Noddack's objections, at that time all working groups followed the hypothesis that irradiating uranium with neutrons always produced elements heavier than uranium.

At the Kaiser Wilhelm Institute for Chemistry in Berlin , Otto Hahn , Fritz Straßmann and Lise Meitner also went in search of transuranium elements during this time. Over many years they tried to elucidate the processes observed in Fermi's experiments. While searching for heavier elements, they found some substances that they described as evidence of transuranium elements.

Irène Joliot-Curie and Paul Savitch also devoted themselves to the search for transurans in Paris from 1937 onwards . In 1937/1938 her working group carried out experiments in which an element similar to lanthanum was released, the chemical identification of which turned out to be extremely difficult and which they interpreted as a possible evidence of element 93 based on the assumptions about chemical relationships at the time. They considered it possible that the substance discovered “ has an atomic number of 93 and that the transuranic elements found by Hahn, Meitner and Straßmann to date are elements 94 to 97. "

In fact, the observations made by Hahn, Straßmann, Meitner, Joliot-Curie and Savitch were not evidence of the transuranic elements they were looking for, but rather the nuclear fission of uranium, which was still unrecognized at the time . Their research therefore contributed comparatively little to the knowledge about the chemical element later called "neptunium", since they considered the numerous fission products formed during the nuclear fission of uranium to be evidence of the sought-after transuranic elements and described them as such in their publications.

Edwin M. McMillan and Philip H. Abelson synthesized the radioactive element neptunium for the first time in 1940 by bombarding uranium with neutrons.

The times given are half-lives .

Neptunium is a by-product of energy generation in nuclear reactors . One tonne of spent nuclear fuel can contain around 500 grams of neptunium. The resulting neptunium consists almost exclusively of the isotope 237 Np. It arises from the uranium isotope 235 U through double neutron capture and subsequent β-decay .

Metallic neptunium can be obtained from its compounds by reduction . First, neptunium (III) fluoride was reacted with elemental barium or lithium at 1200 ° C.

Neptunium metal has a silver appearance, is chemically reactive and exists in at least three different modifications:

Neptunium has one of the highest densities of all elements. Along with rhenium , osmium , iridium and platinum , it is one of the few elements that have a density higher than 20 g / cm 3 .

Neptunium forms a number of compounds in which it can exist in the oxidation states +3 to +7. Thus, together with plutonium, neptunium has the highest possible oxidation level of all actinides. In aqueous solution, the neptunium ions have characteristic colors, the Np 3+ ion is purple-violet, Np 4+ yellow-green, Np V O 2 + green, Np VI O 2 2+ pink-red and Np VII O 2 3+ deep green.

A biological function of the neptunium is not known. Anaerobic microorganisms can reduce Np (V) to Np (IV) using Mn (II / III) and Fe (II) species. The factors that influence the biosorption and bioaccumulation of neptunium by bacteria were also examined .

A sample of neptunium metal ( 237 Np), encased by a thick layer of tungsten and nickel (shiny) in shells made of enriched uranium (tarnished black).

As with all transurane nuclides, neutron-induced nuclear fission is also possible with the Np isotopes. The isotopes with an odd number of neutrons in the nucleus - 236 Np of the long-lived ones - have large effective cross- sections for fission by thermal neutrons ; at 236 Np it is 2600  barns , so it is "easy to split".

With the 237 Np occurring in the nuclear reactor fuel, this cross section is only 20 millibarns. However, due to other nuclear physical properties, this isotope is suitable for maintaining a chain reaction with the fission by fast neutrons in the pure material . At the Los Alamos National Laboratory , its critical mass was experimentally determined to be around 60 kg. Therefore, 237 Np is a possible material for nuclear weapons.

The 237 Np produced in nuclear reactors from 235 U can be used to obtain 238 Pu for use in radionuclide batteries . To do this, it is separated from the spent reactor fuel (along with insignificant amounts of other neptunium isotopes) and put into fuel rods that contain only neptunium. These are put back into the nuclear reactor, where they are again irradiated with neutrons; 238 Pu is incubated from the 237 Np .

The times given are half-lives . 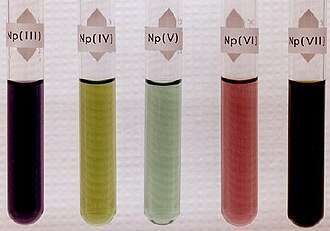 Neptunium in the oxidation states +3 to +7 in aqueous solution.

For neptunium, halides in the oxidation states +3 to +6 are known.

For level +3 all compounds of the four halogens fluorine , chlorine , bromine and iodine are known. In addition, it forms halides in the levels +4 to +6.

In the +6 oxidation state, neptunium hexafluoride (NpF 6 ) is of particular importance. It is an orange-colored solid with very high volatility that changes to a gaseous state at 56 ° C. In this property it is very similar to uranium hexafluoride and plutonium hexafluoride , so it can also be used in enrichment and isotope separation .

Analogous to uranocene , an organometallic compound in which uranium is complexed by two cyclooctatetraene ligands, the corresponding complexes of thorium , protactinium , plutonium, americium and also of neptunium, (η 8 -C 8 H 8 ) 2 Np, were prepared.

Classifications according to the CLP regulation are not available because they only include chemical hazard and play a completely subordinate role compared to the hazards based on radioactivity.