In molecular , atomic , nuclear and particle physics, the cross section ( sigma ) is a measure of the probability that there is a certain difference between an incident wave radiation or an incident particle (“projectile”) and another particle ( scattering body or target ) Process such as B. absorption , scattering or a reaction takes place.

The cross-section has the dimension area. It is usually given in the following units :

The idea of ​​the cross-section as a hit area assigned to each target particle offers a clear measure of the “strength” of the process under consideration: a process that occurs frequently has a large cross-section, and a seldom one has a small cross-section. However, this hit area generally does not correspond to clear ideas about the size, shape and position of the target particle .

The cross section depends on the process of interest, on the type and kinetic energy of the incident particle or quantum and on the type of particle hit, e.g. B. atom , atomic nucleus . The latter dependency means that cross- sections are material properties . For example, the calculation of nuclear reactors or nuclear fusion reactors requires extensive nuclear data libraries that contain the cross sections of the various materials for incident neutrons of different energies for various possible scattering processes and nuclear reactions.

Particularly in the case of nuclear reactions , the cross section, considered as a function of the energy of the incident particle / quantum , is sometimes also referred to as the excitation function.

Depending on the type of process under consideration, different terms are used for the cross-section: 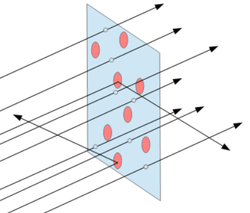 In an experiment with uniform irradiation of the target, the target particle (target particle) is assigned an area σ as an imaginary “target”. Their size is chosen in such a way that the number of observed reactions ("interactions") is specified precisely by the number of projectile particles - point-like, i.e. imagined without expansion - that fly through this surface. This area is the cross section of the target in question for the interaction in question at the energy of the projectile particles in question.

is also assumed, because otherwise the target particles will shadow each other.

If a total of projectile particles enter and each of them has a probability of causing a reaction, then the total number of reactions is given by:

In the theoretical derivation (e.g. in the quantum mechanical scattering theory ) the formula is often divided by the time, i.e. the reaction rate ( reactor physics : nuclear reaction rate ):

Attenuation of the incident particle beam in the thick target

For an infinitesimally thin target layer of thickness , one obtains from the above equation, if one substitutes the product “ particle density times thickness ” for “particles per area” :

Here is the particle density of the target material, i.e. the number of target particles per unit volume:

If you solve the above equation and equate it , you get the differential equation

The solution to this is

Interpretation: the interacting projectile particles are no longer part of the incident beam with the number of particles because they have been absorbed (in the case of reaction) or (in the case of scattering) have been deflected from their original path. In other words, after passing through a target layer of thickness x, only particles are left in the beam.

Looking at the interactions in a given volume , then if is the length of that volume. If you use this, you can change the equation to calculate the cross-section:

where is the mean free path after which the intensity of the incident beam has dropped to its original value.

If more than one type of process is possible, this equation refers to all of them together, i.e. it is the total cross-section (see below). 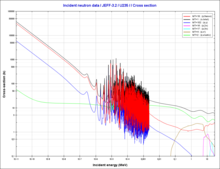 Cross-sections for six nuclear reactions of neutron and atomic nucleus 235 U and their sum, the total cross-section, as a function of the kinetic energy of the neutrons. In the legend, z sometimes stands for neutron instead of the usual symbol n (data source: JEFF, graphic representation: core data viewer JANIS 4 [1] )

The term "total cross section" is used in two meanings:

Therefore the dimension has area per solid angle and as a unit of measurement z. B. Millibarn per steradian . (Physically, the solid angle of a size of the number of dimensions and the differential cross section , therefore, the same dimension of surface as the cross section itself.)

The expression on the left corresponds exactly to the reaction rate as mentioned above (with N T = 1), imagine an experiment with a detector of exactly the size that responds to every incoming secondary particle. Therefore, on the right-hand side, in front of the incoming current density with the factor

exactly the hit area (correct with dimension area ) which belongs to the reactions observed in this experiment.

The differential cross section depends on

The term "differential effective cross-section" without any further addition is almost always meant. Other differential cross sections are:

For complex processes such as the penetration ( transport ) of fast neutrons into thick layers of matter, where a neutron can participate in various scattering processes and nuclear reactions one after the other, the double differential cross section is also considered, as it allows the most detailed physical description. 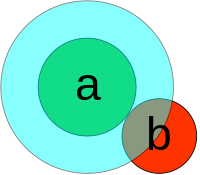 In classical mechanics , all particles fly on well-defined trajectories . For reactions that require projectile and target particles to come into contact, the term geometric cross-section is used, because here not only the size of the cross-section as the hit surface, but also its shape and position (relative to the target particle) have a simple geometric meaning: all particles that fly through this area on their trajectory trigger the observed reaction, all others do not.

Both examples show that one cannot even identify the geometric cross-section with the size of one of the bodies involved (unless the projectile including the range of the force is viewed as point-shaped). The second also shows how wide the scope of the term cross-section can be.

In the case of wave phenomena, the geometric interpretation is not possible. In principle, no deterministic statements can be made about individual projectile or target particles in quantum mechanics either.

In the physics of nuclear reactors, in addition to the microscopic cross-section defined above (i.e. based on 1 target particle, usually 1 atom), the macroscopic cross-section based on 1 cm 3 of  material with the symbol (large sigma) is used. It results from the microscopic cross section by multiplying it by the atomic number density, i.e. the number of the respective atoms per cm 3 . It thus corresponds to the reciprocal of the mean free path introduced above. The usual unit of the macroscopic cross section is cm 2 / cm 3 = 1 / cm. In this area of ​​application, the energies of the two reaction partners are generally not defined uniformly, so that the kinetic energy in their center of gravity varies within a certain frequency distribution. The variable of interest is then the average value of the macroscopic cross-sections determined with this distribution. This can e.g. B. be temperature dependent.

Fermi's Golden Rule states that the reaction rate (number of reactions per time) is:

( see above : as the luminosity of the particle beam),