In the case of an ideal, "fair" dice (that is, no result is preferred due to asymmetrical mass distribution or the like), because of the symmetry, each of the six sides has the same "chance" from the outset ( a priori probability ) of being up after the throw lie. So, for example, the probability of throwing an odd number is 3/6 = 0.5 because there are three favorable outcomes (1, 3, 5) but six possible outcomes.

This is the so-called classical definition as it was developed by Christiaan Huygens and Jakob I Bernoulli and formulated by Laplace . It is the basis of classical probability theory . The elementary events have this same a priori probability .

The experiment is repeated many times, then the relative frequencies of the respective elementary events are calculated. The probability of an event is now the limit to which the relative frequency tends towards an infinite number of repetitions. This is the so-called “Limes definition” according to von Mises . The law of large numbers plays a central role here. Prerequisites are that the experiment can be repeated as required and that the individual runs are independent of one another. Another name for this concept is Frequentistic Probability . This concept of probability is meant, for example, in physics for the decay probability of a radionuclide ; the experiments here are the individual, mutually independent decays of the atomic nuclei.

The propensity theory interprets probability as a measure of the tendency of a process to a certain result.

In non-relativistic quantum mechanics , the wave function of a particle is used as its fundamental description. The integral of the square of the magnitude of the wave function over a spatial area corresponds to the probability of encountering the particle there. So it is not a mere statistical, but a non-determined probability.

In the case of one-off random events, the probability of their occurrence can only be estimated , not calculated. Central aspects are here experts know experience and intuition . Therefore one speaks of a subjectivistic conception of probability, see also Bayesian concept of probability .

Example: After someone has owned different cars, he rates the probability as high (for example “I am 80% sure”) that he will be satisfied with the XY brand the next time he buys a car. This prediction value can be changed up or down, for example by a test report.

However, this intuitive probability assessment harbors a multitude of "stumbling blocks" B. in the subjective perception (risks, such as having an accident due to increased speed , tend to be lower and chances, such as winning the lottery , are estimated to be higher than the actual probability of occurrence) or the asymmetrical information (the subjective assessment of accident risks corresponds the frequency of mentions in the media rather than the actual accident statistics, classic examples are the overestimated probabilities of occurrence of a shark attack or an aircraft accident ).

The axiomatic (based on axioms) definition of probability according to Kolmogorow is the defining definition for mathematics today, see Axioms von Kolmogorow . 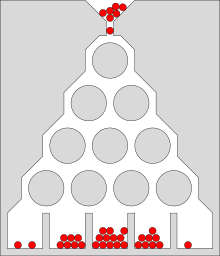 It is often said that people have a bad feeling for probability; in this context one speaks of "probability idiots" (see also numerical illiteracy ). The following examples:

Aleatoric and epistemic probability are loosely associated with the frequentist and Bayesian concepts of probability.

It is an open question whether aleatoric probability can be reduced to epistemic probability (or vice versa): Does the world appear random to us because we don't know enough about it, or are there fundamentally random processes, such as the objective interpretation of quantum mechanics assumes? Although the same mathematical rules for dealing with probabilities apply to both points of view, the respective point of view has important consequences for which mathematical models are considered valid.