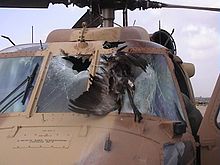 Sikorsky UH-60 helicopter after a bird strike by a crane 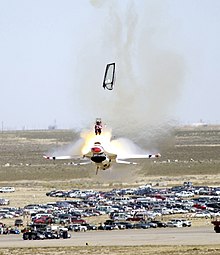 Flight accident of an F-16C of the US aerobatic team USAF Thunderbirds (2003) - The pilot uses the ejection seat .

An aircraft accident is an unforeseen occurrence in connection with the operation of an aircraft that results in personal injury or property damage.

Definition of the EU

The internationally coordinated and binding definitions of ICAO Annex 13 were issued on December 2, 2010 as a binding regulation for the EU (Regulation (EU) 996/2010 of October 20, 2010) and adopted almost word for word in Austrian and Swiss law. In Germany, the term is defined in the Aircraft Accident Investigation Act.

“'Accident' is an event in the operation of an aircraft which, in the case of a manned aircraft, occurs between the time when persons with the intention to fly are boarded and the time when all these persons have left the aircraft, or in the case of an unmanned aircraft between the time at which the aircraft is ready to move for the purpose of flight, and the time at which it comes to rest upon completion of the flight and the primary propulsion system is switched off, occurs at which

a) a person was fatally or seriously injured by

b) the aircraft has suffered damage or structural failure and the structural integrity of the aircraft cell, the flight performance or flight characteristics of the aircraft are impaired as a result and the repair of this damage would generally require a major repair or replacement of the damaged aircraft component, unless that after an engine failure or engine damage, the damage to the aircraft affects an individual engine (including its fairing or its accessories), propellers, wing tips, radio antennas, probes, baffles, tires, brakes, wheels, sheeting, panels, landing gear flaps, windscreens or outer skin ( such as small dents or holes), or is limited to minor damage to the main rotor blades, tail rotor blades or landing gear, or damage caused by hail or bird strikes (including holes in the radome), or

c) the aircraft is missing or is completely inaccessible [...] "

In Germany, the legal definitions are contained in the Act on the Investigation of Accidents and Incidents in the Operation of Civilian Aircraft, FlUUG § 2 and in the appendix examples of serious incidents .

An accident within the meaning of § 2 FlUUG is an event during the operation of an aircraft from the beginning of the boarding of persons with the intention to fly until the point in time at which these persons have left the aircraft again if:

Serious injuries are those that a person has suffered in an accident that:

Of air accidents are disorders distinguished:

The faults listed below are typical examples of severe faults. However, the list is not exhaustive and only serves as a guide for the definition of the term “severe incidents”.

In the event of an aircraft accident, two parallel examinations take place:

Initially, the aircraft accident investigations were often carried out by the supervisory authority. However, since a supervisory authority can be involved in the occurrence of an aircraft accident by issuing inappropriate regulations or by failing to perform its duties, a separation of powers makes sense here. The ICAO therefore recommended in the 1950s that air accidents be investigated by independent bodies.

In Germany, the separation of powers was carried out on September 1, 1998.

In order to implement the European directive into German law, the law on the investigation of accidents and incidents in the operation of civil aircraft (Flugunfall-Investungs-Gesetz - FlUUG) was created on August 26, 1998 and entered into force on September 1, 1998. The previous general administrative regulation for the technical investigation of aircraft accidents in the operation of aircraft has been replaced by this law.

The procedure can be illustrated using the example of a collision between two aircraft on a runway as follows:

The Federal Bureau of Aircraft Accident Investigation has numerous methods at its disposal, depending on the circumstances, which cannot be presented exhaustively here. The size, deformation and distribution of debris provide information about the position, speed and direction of movement of the aircraft upon impact. Other methods range from surveys and the review of maintenance documents to material science examinations (e.g. evidence of material fatigue or faulty welded or glued joints). Therefore, the investigation can take a year or more. Even the analysis of the voice recorder can take months if an attempt has to be made to clearly determine the meaning and origin of background noise.

After completion of the investigations, the federal agency will prepare an investigation report that describes the accident and all the factors and publishes it on its website. This investigation report is freely accessible and serves only to prevent similar accidents. It may not be used for criminal prosecution or for claims under civil law (e.g. from insurance companies). He expressly does not assign guilt, but determines causes.

The examinations are always multi-layered. Based on the fictitious example, the following could result:

Why did the planes collide on a runway? → One of the aircraft has crossed the runway without having received clearance.

Why did the crew not obtain or wait for approval? → The crew had already lost a lot of time due to technical problems, it was their last flight before the vacation, and the psychological pressure made them reluctant to accept any further delay.

How can such psychological pressure be minimized in the future? → The investigating body recommends that the Federal Aviation Office prescribe training programs for the airlines in order to improve the handling of psychological pressure, or to design the operational plans with longer time buffers.

The independent legal clarification is the responsibility of experts from the criminal investigation authority. You are preparing an opinion that is not freely available to the public. On the basis of this expert opinion, the public prosecutor's office will check whether there is any initial suspicion and, if necessary, bring charges.

Under ICAO rules - they apply at least for international flights - the country on whose territory the accident occurred must investigate the accident. If the accident took place over international waters (e.g. Air France flight 447 ), investigate the country in which the aircraft was registered. The same applies if the location of the accident cannot be determined. Each country can, by mutual agreement, transfer the investigation to another country. This is the case, for example, if a country lacks the necessary technical expertise ( e.g. Egypt Air flight 990 ). In the case of sensitive political circumstances, the investigation can also be delegated to the ICAO (this has happened four times so far, e.g. Korean Air Lines flight 007 ) or it can be carried out jointly by two countries ( plane crash in Smolensk ). The countries in which the aircraft or its engines were built send technical experts. Countries whose citizens have died can send observers.

The Federal Office for Aircraft Accident Investigation was set up as the responsible German authority in accordance with FlUUG § 4 . According to FlUUG § 3 , the purpose of the investigation is, if possible, to clarify the causes, with the aim of preventing future accidents and disruptions, and the investigations do not serve to determine fault, liability or claims:

(2) The investigations do not serve to determine fault, liability or claims. "

The law enforcement authority (public prosecutor / police) investigates parallel to the Federal Aircraft Accident Investigation Agency, but is not an investigative agency. If necessary , it commissions aviation experts to check whether there is any initial suspicion .

Accidents that predominantly affect military matters are investigated by the General Aviation Safety Department of the Bundeswehr in the Bundeswehr Aviation Office based in the Wahn air force barracks .

In the Federal Office for Transport is moved department VERSA (road safety work in Austria) is in accordance with the federal law on the independent safety investigation of accidents and incidents (accident investigation law - UUG 2005) § 2 responsible for receiving and investigating incidents and accidents in the Austrian air transport.

The Swiss Security Investigation Board (SUST), based in Payerne, is responsible for investigating accidents in civil aviation in accordance with the Ordinance on the Investigation of Aircraft Accidents and Serious Incidents (VFU) .

Measured against the very high, continuously increasing number of flights worldwide and a transport performance in the passenger sector alone of more than two billion people per year, aircraft accidents with personal injury are extremely rare occurrences in civil aviation.

According to the European Transport Safety Council (ETSC) in 2001/2002, the expected mortality rate in aircraft accidents was 15 deaths per 100 million passenger flight hours.

According to the non-governmental organization Bureau of Aircraft Accidents Archives (B3A) (formerly Aircraft Crashes Record Office (ACRO) ), founded in 1990 and based in Geneva , the following statistical data are available for air traffic accidents involving aircraft that can carry more than six passengers, with the exception of helicopters and balloons and fighter jets (only crashes in which the aircraft was damaged and therefore not taken into service are taken into account. The data may therefore be higher than other statistics for incidents and fatalities):

According to the Federal Bureau of Aircraft Accident Investigation (BFU), 28 people died in 150 air traffic accidents in Germany in 2015; including a helicopter accident that left three dead.

In addition to disrupting air traffic, air accidents have a direct impact on airlines. A number of companies have already had to file for bankruptcy after high pain and suffering payments if culpability was proven, and the reputation of society often suffers. Examples: British Airtours (1985), Adam Air (2008) and Pan Am (1991).

Aircraft accidents can even result in the operation of an aircraft type being temporarily or completely prohibited and all aircraft affected being temporarily banned from flying. Examples of this were the McDonnell Douglas DC-10 as a result of the accident on American Airlines flight 191 in 1979 , the Concorde after the Air France accident in 2000 and the Boeing 737 MAX in 2019 after the crash of Lion Air flight 610 and Ethiopian Airlines Flight 302 due to problems with the Maneuvering Characteristics Augmentation System (MCAS).