This article is about the pilot who controls an aircraft. For other meanings, see Pilot (disambiguation) . 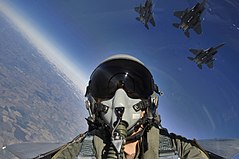 Fighter pilot during a training flight

Workplace of the pilots in an Airbus A380

A pilot ( French pilote , of Italian pilota , older form pedotta "helmsman" to ancient Greek πηδόν Pedon , German , Rudder ' ) is a person that one aircraft controls or is authorized to do so. In official parlance, he is therefore often referred to as an aircraft pilot. Sometimes the term “pilot” is also used figuratively for drivers of other vehicles to express their professionalism.

Pilots and pilots can be categorized under different aspects: 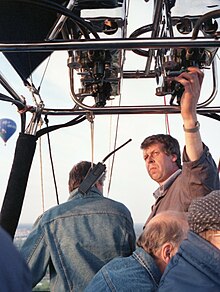 Balloon driver as the responsible pilot with passengers

A responsible pilot , English pilot in command PIC , (also flight captain or commander ) is the pilot who is designated by the owner of the aircraft for this purpose. Requirements for this are a valid flight license and necessary flight experience, an additional type rating , medical certificate and radiotelephone certificate . He is responsible for the safe conduct of the flight and is the owner of the so-called on- board violence , § 12 Aviation Security Act (LuftSiG) , internationally regulated in the Tokyo Agreement . He is therefore authorized to issue instructions to everyone on board, including flight safety attendants , and can enforce his instructions with force if necessary, e.g. B. Restraint of passengers or passengers. Commercial aircraft are usually flown by at least two pilots or, in the case of long-haul flights, with several crews. Regardless of this, there is always only one responsible pilot on board.

Flying as a leisure activity

Private pilots fly aircraft in non-commercial operations and air sports equipment , mostly as a leisure activity and with a few exceptions, such as. B. Flight instructor for air sports equipment in Europe, receive no payment. This means that any transport of passengers against payment is prohibited. There are a number of different licenses that allow private flying. Depending on the corresponding authorizations, there are no size or weight restrictions for private pilots on the aircraft they fly. Private pilots do not wear uniform .

The only license for the private sector that is valid worldwide is the private pilot license according to the guidelines of the International Civil Aviation Organization (ICAO). It allows worldwide non-commercial operation of aircraft of various categories and classes on aircraft of the state of the issuing authority. To this day, it has represented the entry-level license for most aircraft classes and is usually a prerequisite for acquiring a professional pilot's license.

While pilots were pioneers in the early days of aviation , the profession of pilot emerged with the first commercial flights . Nowadays one distinguishes professional pilots that are commercially active in the aerospace and airline pilots , mostly with airlines fly. For commercial flights with aircraft up to 5.7 tons MTOW , which can be flown by a single pilot who is a commercial pilot license (commercial pilot license, CPL) required. In contrast, pilot in command for commercial operation need of aircraft, whose operation requires a multi-headed crew is required or their take-off weight with 5.7 t MTOW is, the traffic pilot license (ATPL) or the multi-Crew Pilot License (MPL). For co-pilots, a commercial pilot license with a theory test of the ATPL and additional practical training (frozen ATPL) is sufficient. A total of around 19,000 people in Germany had an ATPL or MPL license in 2017.

For aircraft except for aircraft, training is carried out in stages. After receiving the private pilot's license, the professional pilot's license with instrument flight authorization is acquired. There is training on multi-engine machines, for aircraft with several people in the cockpit and a type rating. After this training, you start your career as a co-pilot in order to pass the test to become a commercial pilot after having acquired the required flight hours in order to be able to work as a responsible pilot. Commercial pilots with this training are entitled to exercise the rights of the subordinate licenses.

Since 2008, training for a multi-crew pilot license has been offered at commercial flight schools. The training is aimed directly at the use as a co-pilot in a transport machine with a multi-crew cockpit. Other pilot licenses are no longer obtained, and solo flights during training are not provided. If these pilots are authorized to become commercial pilots after the required flight time, they are not authorized to fly aircraft in solo flight and to exercise the rights of commercial or private pilots. It is therefore criticized that this training is tailored to work in large airlines and restricts the job market for pilots. Due to the limited license, the pilot is therefore not suitable for alternative commercial activities in aviation, such as B. a job as a pilot in general aviation .

If several people are required to operate the aircraft , they work together:

In the past, a radio operator and a navigator were often part of the crew. These were replaced from the 1960s by the expansion of radio communications and the introduction of automatic navigation systems such as INS .

Rank badge of the cockpit crew

The following rank badges are chosen using the example of Lufthansa - they can differ from airline to airline, or can be supplemented by further ranks.

In October 2009, the Cockpit Association criticized the working hours of pilots as unsatisfactory and as a threat to passenger safety. With reference to a study commissioned by the EU (Moebus Report), she stated that the EU's rules on flight times and rest periods favor dangerous overtiredness and exhaustion.

The assumption that a career as a pilot is not compatible with family and career is a major reason for the low proportion of women among pilots and applicants for this career, with girls also showing less interest in technical professions . In view of the staff shortage, the airline Lufthansa implemented a program (which has since been discontinued) in 2000, which enabled job sharing for pilots with young children as well as part-time work and was also open to flight captains.

The basic requirement for flight training and the activity as a pilot is fitness to fly. The international guidelines of the International Civil Aviation Organization (ICAO) divide medical fitness into three classes;

In the area of ​​the European Aviation Safety Agency (EASA) there is another class of fitness, which is only valid in the member states of EASA: the certificate of fitness for pilots of light aircraft (LAPL) . In addition, there are national licenses, e.g. B. The Sport Pilot Certificate in the United States, which does not require a medical examination.

The AME is after the Aeromedical fitness before the medical certificate ( English medical certificate ) from which is to be carried by the pilot. It is the responsibility of the pilot to check whether he is fit to fly before starting the flight. If he has any doubts as to whether he is fit to fly, he is not allowed to take the flight. In the event of serious illnesses, accidents and surgical interventions, he is automatically unfit to fly and may only resume piloting after he has recovered and has been consulted and approved by the flight doctor.

The flight training for ICAO recognized licenses is generally regulated by the convention of the International Civil Aviation Organization . In the European Union , training is regulated in detail by Regulation (EU) No. 1178/2011 (EU-FCL) and takes place in a flight school , e.g. B. in an air sports club or at a commercial aviation school . As part of the training, a radiotelephone certificate (AZF, BZF 1, BZF 2) is usually acquired, which entitles the pilot to carry out radiotelephony and to use radio navigation equipment. The radiotelephone training can also be an integral part of the pilot's training without a radiotelephone certificate being issued.

Basically there are two different types of flight schools in the EASA member states :

After completing the training, the pilot can take further training steps that enable him to use larger and more complex patterns, the so-called ratings . As an an example:

Furthermore, further training to get further authorizations, e.g. B.

To be allowed to larger and more complex aircraft flying is related to the particular aircraft type rating to buy.

To fly a plane with several crew members, a special education for the training of communication and coordination between members of the cockpit crew (is English multi-crew-cooperation MCC ) is required.

Student pilots in military aviation are mostly prospective officers , less often NCOs who are undergoing flight training. In most cases, before the actual start of the training, a general and aviation selection process takes place, in which it is to be ensured that only well-suited candidates go through the tightly organized and highly demanding aviation training.

The International Civil Aviation Organization ICAO ensures an internationally uniform handling of the most diverse practical aspects of aviation, including licenses. According to the guidelines of the ICAO, the following licenses are issued by the responsible aviation authority after completion of the respective flight training and the passing of a theoretical and practical examination:

With these licenses an aircraft of the issuing country of the license may be operated worldwide. A conversion into the equivalent pilot license of another country is usually possible in a simplified procedure. The ICAO-compliant licenses are issued for aircraft, rotary wing aircraft, airships, free balloons, gliders and aircraft with vertical take-off and landing capabilities.

Many states and also the European Union have additional licenses for pilots in their own jurisdiction. These licenses are mostly only valid in the countries issued and can only be used in other countries on the basis of binational agreements or exchanged for equivalent licenses in other countries:

The pilot has to carry the flight license with him during the flight.