A commercial aircraft (colloquially transport machine ) is a plane that of airlines , air cargo companies and private operators in the public transport is operated and its main purpose in use of the commercially -oriented transport of passengers or freight is. The group of commercial airliners, including civil aircraft primarily designed as charter or private aircraft, is also referred to more generally as a passenger aircraft (also known as touring aircraft )( Business aircraft ) .

“ Passenger jet ” and “ jet airliner ” are colloquial terms for a passenger aircraft powered by jet engines. These form the drive type that is predominant today - although modern propeller technology ( propeller aircraft ) is still used in small machines in the short-haul sector because it is considerably more fuel-efficient.

The equipment available in a commercial aircraft and the comfort offered depend on the type of airline (see also low-cost airline ) and the booked class of transport (First, Business and (Premium) Economy), as well as the wishes of the private operators and the needs of the freight forwarders.

Larger modern commercial aircraft are equipped with a pressurized cabin in order to be able to keep the air pressure inside the cabin at a level that is tolerable for humans, even at high altitudes . Furthermore, almost every commercial aircraft today has an air conditioning system . 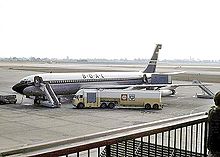 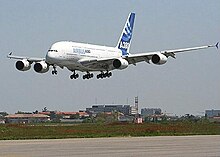 In 1914, the Sikorsky Ilja Muromets was the first passenger aircraft designed as such with a closed, heated and illuminated passenger cabin for 16 people with a bedroom and toilet. The previous models Sikorsky Russki Witjas , "Bolshoi Baltijski" and "Le Grand" were still to be classified as experimental aircraft. The first all-metal airliner was the Junkers F 13 from 1919.

Lockheed developed the Lockheed 9 Orion in 1931, the first airliner with retractable landing gear. The German Junkers Ju 52 / 3m was manufactured in large numbers from 1932 and used worldwide. With the Douglas DC-3 in 1935, Douglas made a leap forward in terms of performance and economy. The first airliner with a pressurized cabin was the Boeing 307 Stratoliner in 1938 .

The first short-haul jet airliner with engines arranged on the fuselage tail and a “clean” wing was the Sud Aviation Caravelle in 1955 . The Boeing 707 was the first long-haul aircraft equipped with jet engines in 1957 .

The Antonov An-22 made its maiden flight in 1965 and remained the largest aircraft in the world until the Boeing 747 was introduced. It is still the largest turboprop aircraft today. The first flight of the most successful commercial aircraft to date, the Boeing 737 , took place in 1967. It is still in use internationally in many variants as a short and medium-haul passenger aircraft.

Boeing made a leap forward in terms of aircraft size and range in 1969 with the Boeing 747 “Jumbo Jet”. It was the first wide-body jet; the airline Corsairfly held the record for the highest passenger capacity of the B747 with 582 (in 2006 even 587) seats. The machines are now seated more loosely. The Hughes H-4 should have carried up to 750 passengers. In 1947, however, there was only one test flight with ground effect .

The first twin-engine wide - body aircraft was the European Airbus A300 in 1972 . The Concorde , probably the most famous supersonic airliner, took off on commercial scheduled flights for the first time in 1976.

In 1987 the Airbus A320 was the first to use a glass cockpit , fly-by-wire control and a sidestick instead of a control horn in a commercial aircraft. In addition, a refined computer control increased the profitability and prevented load exceeding by limiting the control commands to a certain level within the so-called "flight envelope".

In 2005, the Airbus A380 was the first wide-body airliner with two continuous passenger decks one above the other (four-aisle). The passenger capacity of the Boeing 747 was exceeded - Emirates is now (as of 2017) using the A380 with 615 passenger seats. Plastic composite materials have never been used in any commercial aircraft to a greater extent than before in order to save weight and thus achieve a clear economic advantage.

Since the merger of the two American manufacturers Boeing and McDonnell Douglas, the market for commercial aircraft with over 100 seats has been largely served by two providers in a so-called duopoly :

In the area of ​​so-called regional airliners with 30 to 120 seats, the following companies offer aircraft, with the first three clearly dominating the market:

The following companies have discontinued their activities as developers of new commercial aircraft in the course of the increasing corporate concentration of the aircraft manufacturer market since the end of the Second World War or are currently not developing any new types:

A regional airliner is a smaller airliner that is used in so-called regional air traffic , i.e. on short or less popular routes. Mostly the offer is aimed at the high-priced sector of business travelers, because the seat-kilometer costs are not competitive with the costs of the low-cost airlines . Large airlines therefore like to outsource regional traffic to a subsidiary in order to be able to better counter the cost pressure. Regional flights account for a large proportion of flight movements, but only account for a small proportion of seat kilometers . Regional traffic is necessary for large airlines to bring passengers to the hubs and fill the large long-haul aircraft .

Usually two engines are installed (exception: BAe 146 ), as well as up to 70, in some definitions even up to 120 seats. A central aisle separates the seating arrangement 1 + 2 or 2 + 2, depending on the trunk width, and also 2 + 3 or 3 + 3 for larger models. The smallest machines in this aircraft class, such as the Embraer EMB 120 and Saab 340, offer space for around 30 passengers.

The type of engine is of fundamental importance. In regional air traffic, a turboprop with 450 to 650 km / h has a speed disadvantage compared to regional jets operated with jet engines . Current regional jets reach speeds that are in no way inferior to those of medium-haul aircraft, i.e. around 700–900 km / h. Since there are now a large number of these regional jets (such as the Bombardier Regional Jets or the Embraer regional jets ), it looked for a while as if the turboprop aircraft were nearing their end. In view of rising fuel prices, however, something like a renaissance of the turboprop engine was heralded in 2005 , as this has a significantly lower fuel consumption. This led to increasing demand from both ATR and Bombardier (for the Q series). The installation of so-called Active Noise Reduction systems also significantly reduced the noise from the propellers inside the cabin.

One advantage of the turbo-propeller aircraft over the regional jets is the lower fuel consumption and the significantly shorter take-off and landing distance, which makes them interesting for flights to and from smaller airports. Comparable low values ​​for take-off and landing routes are only achieved with regional jets that are specially designed for this purpose, e.g. B. the BAe-146 .

The Dornier Do 228 is a classic representative of the feeder class (English: Commuter Category )

A commuter aircraft (English: Commuter Aircraft or feeder liner ) is a small short-distance transport aircraft for passengers and at most 19 with a maximum take-off weight ( MTOM ) of 8618 kg (19,000 lbs). It is the smallest class of airliners after regional airliners. This category nominally emerged in the UK around the mid-1940s when the need for appropriate aircraft was recognized, but saw its first real use in commercial aviation in the US in the 1950s. In the 1970s, new specific requirements arose for feeder aircraft when the hub and spoke structure (hub and spoke) with turnstiles or nodes became established in aviation. To oscillate (engl. Commute ) between smaller end node and central node short-haul aircraft were required for approximately 15 passengers. As a result, aviation authorities such as the US Federal Aviation Administration (FAA) developed approval regulations that were adapted for this aircraft class. For example, the certification specification CS-23 (Certification Specifications) of EASA covers normal, utility, aerobatic and commuter aircraft with a maximum of 19 seats (without crew) and a maximum take-off weight of 8,618 kg (19,000 lbs). Occasionally, however, even smaller machines are used as feeder aircraft, which, depending on the type, can have 6 to 10 seats.

A QC airliner (QC from English for quick change ) is the name for airliners that can be used for passenger, freight or mail transport by quickly converting the cabin equipment .