Flying altitude is the measured vertical altitude of an aircraft over a certain reference surface. Depending on the flight situation, different reference areas come into consideration. The exact measurement of the flight altitude is of great importance for flight safety in order to be able to ensure sufficient safety distances to other aircraft and ground obstacles.

This altimeter shows an altitude of 10,180 feet (3,340 m) (thin pointer: tens of thousands, short pointer: thousands, long pointer: hundreds). The reference pressure is set using the rotary knob at the bottom left and displayed in the small window on the right (here standard pressure 29.92  inches Hg ). Because of the setting to standard pressure, the display can also be interpreted as flight level 102 (approximately).

The flying height is in principle with the barometric working altimeter (engl. Altimeter ), whereby one advantage of the fact makes that the air pressure decreases with increasing altitude. However, because firstly different reference surfaces are used for altitude measurement and secondly the air pressure changes not only with altitude but also with the weather, altimeters always have a setting option for the reference pressure (the pressure at which they would display zero altitude).

The following reference surfaces for altitude measurement are used in aviation :

It makes sense to use the ground as the reference surface for the height measurement, for example to be able to maintain safety heights above the terrain and ground obstacles. The flight height above ground (abbreviated GND for ground or SFC for surface ) is called height (HGT). In flying practice, this altitude only plays a role in special cases. During a cross-country flight, the height of the underlying terrain changes far too quickly for such a measurement to be useful. The reference pressure ( QFE ) would very often have to be adapted to the terrain height and would also be dependent on the weather that has just flown through.

If the flight altitude is to be determined independently of the altitude of the overflown area, it is expressed as altitude above sea level (MSL, mean sea level ). Obstacle heights on flight maps are also given in feet above MSL, so that safety heights can be maintained. The altitude in relation to MSL is called altitude (ALT). The reference pressure to be set for this, i.e. the current air pressure value converted to sea level, is referred to as QNH . It is set at least before departure; for cross-country flights at low altitudes, the setting must be regularly adjusted to local changes in air pressure due to weather conditions. In flight, the current value can be obtained from flight weather reports or landing information from airports.

In the unobstructed airspace, the actual height is no longer of interest, since sufficient distances to ground obstacles are always given. It is much more important here to use a reference value that is also independent of the weather in order to ensure that all aircraft measure their altitude according to the same reference pressure and that vertical distances from one another can be reliably maintained. The normal pressure of 1013.25 hPa (corresponds to 29.92 mm Hg ) was set as this uniform reference pressure  . The altimeter is set to this reference value when climbing the so-called transition height - regardless of the actual air pressure. The measured value of the altitude is no longer referred to as a height, but (divided by 100) and flight level (FL, flight level ): FL 120 corresponds to an altimeter display of 12,000 feet (3658 m) with respect to atmospheric pressure. In descent, the altimeter is set back to the current meteorological value when the transition area sinks .

The display of a barometric altimeter follows the standard atmosphere . Since the relationship between pressure and altitude also (slightly) depends on the temperature and water vapor content of the air, the displayed flight altitudes rarely correspond exactly to the actual values. However, since this display error is minimal and also turns out to be the same for all aircraft, this is not critical.

It is an international practice to indicate flight altitudes in feet (ft). The designation of the flight areas comes from the displayed height in feet. In a few countries all flight altitudes are expressed in meters . In Germany, altitude measurements in meters are only common for gliders , airships and parachutists . 100 ft corresponds to 30.48 m.

Under certain circumstances, a direct (and accurate) height measurement above the ground (HGT) is performed by radio signal. In the landing approach with commercial aircraft , for example, the direct altitude determination by radio altitude measurement (radar altimeter) is used as additional information. The decision height is only measured using a radar altimeter for ILS categories (CAT) II and III .

In addition, the flight altitude can also be determined from the ground by means of radar and transmitted to the pilot by radio, but mostly only through military radar systems. 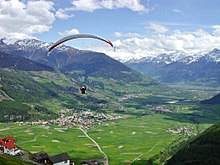 Flying to enjoy the landscape: a silent paraglider a few hundred meters above the valley floor

The following overview, at which flight altitudes which aircraft are located, does not represent any regulations or fixed rules, but only serves to give the layman an approximate idea. For a better overview, the heights are given in meters above the ground (GND) and only apply to a limited extent at higher altitudes.

The minimum safety height for aircraft, which may only be undercut during take-off or landing, is in Germany:

The human organism is adapted to life on the ground. The air pressure conditions encountered while flying can therefore become problematic:

Visibility to the horizon

As the flight altitude increases, the horizon observed from the aircraft moves further and further away . If an aircraft is flying over the sea or over a flat area, such as the Kalahari , the visibility is calculated as follows:

Here the altitude must be entered in meters . The distance is expressed in kilometers . If an airplane flies 900 meters above flat ground, the horizon is 108 kilometers away. Accordingly, the visibility from a height of 10,000 meters is around 360 kilometers.

height (HGT)
is the height above GND (ground) ( AGL ), i.e. above the ground. With height also z. B. specified the height of a tower.
altitude (ALT)
is the height above MSL or the reference height (ELEV + HGT = ALT).
elevation (ELEV)
refers to the height of the ground (GND) above mean sea level (MSL). For airfields, the information refers to the highest point on the ground in the landing area of ​​the airfield.
flight level (FL)
(German flight level ) is the hundredth of the altitude in feet, which corresponds to the air pressure currently measured by the altimeter above the standard atmosphere of 1013.25 hPa . A flight level therefore corresponds to an isobar . The altimeter is for displaying flight level set height measurements by the reference pressure to the standard air pressure (engl. Standard pressure level ) of 1013.25 hPa is set.
transition altitude
(German transition height) refers to a height in Germany that is 1640 m above MSL, but at least 656 m above GND. This is achieved in a climb . Donkey Bridge: The “A” in “Altitude” resembles an arrow pointing upwards. This is where the flight levels begin , so the pilot has to switch the altimeter to the standard air pressure of 1013.25 hPa. In other countries, the flight levels can start at lower values. The transition altitude for the respective airfield is noted on IFR cards.
transition level
is the flight level above the transition altitude at which the altimeter is switched back to QNH during descent in order to display the actual flight altitude for the landing approach. Donkey bridge: The “L” in “Level” resembles an arrow pointing downwards (with a lot of imagination). The pilot receives the current QNH value via radio from air traffic control / flight control , from an automatic announcement ( ATIS ) or from an airport in his vicinity. There is a distance of at least 328 m between the transition altitude and the transition level ( transition layer ). From this we can deduce: QNH greater than 1013 hPa: TL 60, QNH from 983 to 1013 hPa: TL 70, QNH less than 983 hPa: TL 80.
transition layer
refers to the difference in altitude between the transition altitude and the transition level . This difference in altitude of mostly 328 m is required by larger aircraft for handling , i.e. completing cockpit work such as QNH adjustment etc.