Various gliders in waiting position at the end of a runway

A glider is a for the glider constructed aircraft . Motorless flying means alternating climbing in the updraft and gliding with little loss of altitude. In Germany, gliders are classified as a separate aircraft class under aviation law and may weigh up to 850 kg.

When climbing in the updraft, the glider gains potential energy , which is converted into forward speed ( kinetic energy ) during the subsequent gliding flight . If you only consider the glide phase, in principle any aircraft can be used as a glider. For example, an Airbus A330 on Air Transat Flight 236 covered a distance of 120 km in gliding flight. Other examples would be the ditching of an Airbus on the Hudson River or the Gimli Glider .

With powered aircraft, gliding is usually limited to stable gliding. Exceptions are motor gliders, who, thanks to their special construction, can also use pure gliding. The Space Shuttle Space Shuttle landed as a glider . The private spaceship SpaceShipOne was even officially approved as a "non-self-launching glider with auxiliary propulsion".

In a narrow sense, only those aircraft are called gliders that are capable, in the normally occurring in the atmosphere thermals to gain altitude. On the one hand, the minimum rate of descent must be less than the speed of the rising air masses; on the other hand, the minimum circular flight diameter must be smaller than the diameter of the updraft.

Mosquito cleaner on a Ventus 2

Gliders must always be able to reach the next updraft. This requires a good relationship between the altitude used in gliding and the distance covered ( glide ratio ).

Modern gliders have a glide ratio between 1:30 and 1:60, so with 1 km loss of altitude they can fly 30 to 60 km in calm air. The ETA , currently the most powerful series-produced glider, even has a glide ratio of around 1:70 with its wingspan of 30.90 m. It is only surpassed by the Concordia , an experimental high-performance sailor with a calculated glide ratio of over 70.

In order to be able to provide good gliding characteristics, a glider must be built with very little resistance. A low air resistance is necessary, otherwise too much energy is lost through friction.

The drag that a wing creates is the induced drag. It arises from the pressure equalization between the top (negative pressure) and the bottom (overpressure), which causes wake vortices. In order to reduce the induced drag, curved wing tips, so-called winglets , are increasingly being used . This can also be seen on commercial aircraft.

A low weight is only a secondary feature: Although a low wing loading (i.e. the quotient of mass and wing area) enables a low self-sinking and thus a better climb in thermals , the flight speed of optimal gliding is reduced due to the lower potential energy. This means that a light glider in the high speed range (from around 130 km / h) loses altitude more quickly than an identical model that is heavier. High wing loading results in faster straight flight - with good thermals. But the self-sinking is slightly greater. The associated disadvantage of the poor climb in circling flight is negligible with good thermals.

Nowadays, gliders from standard class upwards usually have water tanks to increase their weight (typical capacity is 160 l, but realizes up to 300 l in Nimbus 4 ) in order to increase the aircraft mass. The speed of the best glide can increase significantly with water ballast. The water is filled in before the flight and can be drained off in the evening when the thermals subside. However, it has to be lowered before landing so that on the one hand the landing is “short” (large mass means great inertia when decelerating) and on the other hand the aircraft structure when touching down and the brakes are not unnecessarily stressed when braking.

A high degree of maneuverability is necessary, as the thermals can be very limited (especially when circling below 400 m above ground and strong turbulence ). The smaller the circle diameter, the more effectively the thermal can be used. Modern gliders are designed in such a way that they fly stably and safely in a speed range of around 80 to 280 km / h. Gliders in mixed construction (oldtimers) with low wing loading are sometimes even superior to modern high-performance gliders because they can circle much more closely due to the low turning speed. A Ka 8 can safely circle at 75 km / h, whereas an ASH 25 with water ballast needs around 110 km / h to still circle cleanly. This results in a diameter of 75 m compared to almost 200 m.

Since high speed with a good glide angle is only possible with a relatively high wing loading, a stable structure is taken into account in gliders and extremely lightweight construction is avoided. But not only because of the high stress in flight must gliders be sturdy; a field landing , as must the airplane stand in fields and ungeerntetem grain while the pilots offer the best possible protection.

For reasons of strength and surface quality, the wings as well as the fuselage and tail unit of modern gliders are made of fiber-plastic composites .

Since it is not possible to start the aircraft again in the event of an outland, it is "disarmed" on site and brought to an airport in a transport trailer. For this purpose, gliders are usually designed in such a way that they can be dismantled into a few transportable parts (usually wings , fuselage and horizontal stabilizer ) in a few minutes . 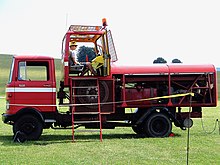 Towing winch on the Degerfeld

In aircraft towing , the glider is pulled into the air by a tow plane (this can be a motorized light aircraft , an ultralight aircraft, or a motor glider). The tow rope is usually attached to the nose hitch or, in rare cases, to the center of gravity hitch on the underside of the glider. The height at which the glider disengages is usually between 500 m and 1500 m. After the release, the tow plane either pulls the tow rope onto a reel located in the fuselage or throws it off over the take-off point before landing.

During winch launch , the glider is pulled into the air by a stationary winch at the opposite end of the runway. Long steel or plastic ropes are used here. The winch driver controls the pulling force of the rope, while the pilot controls the angle of climb. At a certain towing height, the rope reaches a structurally predetermined angle to the longitudinal axis of the aircraft, at which it falls out of the tow coupling without the pilot having to release it manually. With lengths of the towing distance of 800 m to 3000 m, release heights of 300 m to 1300 m can be achieved (among other things depending on wind and aircraft type). Modern, lightweight synthetic ropes enable greater release heights for long towing routes. The winch launch is the fastest and cheapest type of launch, but also the least flexible (release height and location cannot be freely determined).

A self-launch is possible with motor gliders that can start your engine alone. There are also motor gliders that are equipped with a weaker engine (so-called homecoming aid, also known as a lazy slide among glider pilots ), with which they cannot take off alone, but which is only used to fly through areas with insufficient thermals without loss of altitude to avoid an outlanding . In modern gliders, these drives are usually designed as retractable engines, in which a propeller tower folds out of the back of the fuselage behind the wings. The engine is then either attached to this tower or it remains in the fuselage. In this case the propeller is driven by a toothed belt with a corresponding reduction.

The rubber rope launch was the first way to launch a glider. It can only be carried out on very light and usually old gliders, such as the SG38 , and on a slope. A rubber cord is attached to the front of the aircraft and tensioned while it is held at the tail. On command, the aircraft is released and thrown into the air.

When towing a car, the aircraft is pulled into the air by a moving car. No great heights can be reached.

Gliders are steered around three axes in a similar way to normal airplanes by means of elevators , rudders and ailerons . Here you control the inclination and the speed with the elevator. The control surfaces are operated directly and purely mechanically by the pilot, two-seater gliders can always be controlled from both seats. To make the landing approach easier, gliders usually have spoilers with which the approach angle can be controlled. High-performance gliders can also have flaps in order to have good flight characteristics in the broadest possible speed range.

As a minimum instrumentation, all gliders must be equipped with an altimeter and an airspeed indicator . Almost without exception there is also a variometer for determining vertical speed and a hood thread for flying coordinated turns.

With the use of an acoustic variometer and the canopy thread, there is no need to look at the instrument panel, which allows for better airspace observation. The speed is controlled based on the horizon distance (height of the aircraft nose below the horizon) and the driving noise.

Para gliding, there are national and international competitions in the disciplines of cross country flying and sailing aerobatics .

In addition to these so-called “central competitions” (all participants take off from the same airport), the “decentralized competitions” are becoming increasingly popular. The most important competition in Europe is the Online Contest (OLC), in which the participants submit their standardized GPS logger files and are evaluated in an individual and a club evaluation.

In the central competitions, the distance flown and the cutting speed achieved are taken into account in the evaluation, while in the decentralized competitions only the total distance flown counts. A certain bonus is given for the previous announcement of the route flown and a route that resembles an equilateral triangle. In order to make the different types of aircraft within the competition classes comparable, a glider index was introduced.