The class policy is intended to promote fairness in competition, reduce costs for newcomers and ensure a stable environment for investment decisions by manufacturers and competitors.

The sport of gliding has an institutional framework on an international level, which ensures that essentially the same classes and class definitions are flown in all countries. While soaring is flight or performance-oriented by nature, classes have so far not been created to promote technological development, but have rather been stimulated by market dynamics or the interaction of research and industry.

The Fédération Aéronautique Internationale (FAI) is the institution that controls air sports on an international level. Seven glider classes are currently recognized by the FAI and are therefore approved for European and World Championships :

World records in gliding are classified by the FAI in sub- classes that do not correspond one-to-one with the competition classes mentioned above:

A class for even lighter aircraft with a wing loading of up to 18 kg / m² is under discussion.

Competition classes that are not recognized by the FAI existed in regional or national competitions. The most important are:

The open class is the oldest competition category, which only came into being with the introduction of the two-seater class in the early 1950s. This unrestricted category is a field for technological innovation. Many research prototypes fall under this class definition, for example the D-30 from 1938, which had swivel blades, the SB 10 from 1972 with an enormous span of 26 m or 29 m at the time, or the fs 29 from 1975 with a variable span.

The open class achieves the highest performance in the competitions, daily tasks of over 1000 kilometers are possible today in very good weather. A successful open class glider must, however, be practical despite its high gliding performance. Extreme designs tend to fail, for example with Fieseler Austria from 1931 or Operation Sigma from 1971.

Open class competitions are - despite the name - rather exclusive, as the number of participants in this category is lower than in the other classes. A fair number of gliders were competitive until the 1960s, with smaller wings often beating the larger ones. The fiber composite revolution , however, messed up the class. With wings made of carbon fiber reinforced plastic , spans of the Nimbus-3 and the ASW 22 of 24 m and more were possible in 1981 , which initially made the open class the domain of two manufacturers.

After two decades of gradual gains in performance, the appearance of the eta in 2000 brought a leap in performance and a further price escalation. This very expensive aircraft has already been successful in competitions and it will inevitably have an impact on the cost of remaining competitive in this class.

Standard class was introduced in the late 1950s as an alternative to the increasingly heavy, difficult to fly, and expensive open class aircraft of the time. Geared towards affordability and simplicity, the original standard class guidelines restricted the span to 15 meters and prohibited retractable landing gears , buoyancy-increasing devices such as flaps and throwable water ballast. The embodiment of these guidelines is Ka 6 .

However, technical development accelerated in the following years. The transition to fiberglass construction increasingly presented the existing guidelines as inadequate. The more rigid structures allowed higher wing loads, so the competitors resorted to solid ballast to compensate for this competitive advantage. This led to high landing speeds, with the risk of damage during landings. The fixed landing gear caused most of the drag of the sleek fiberglass planes. The designers responded by lowering the wheels into the fuselage, which increased the risk of damage to the ground. The manufacturers have now argued that a retractable landing gear is the cheapest way to increase performance.

Given these safety and cost arguments, the standard class rules have been updated to allow water ballast as well as retractable landing gear. The requirement for large dive brakes was dropped, and wing tips were allowed. This created difficulties, since a separation between airbrake flaps at the wing tip and lift-increasing flaps is vague. The reluctance of the IGC (see Fédération Aéronautique Internationale ) to allow the latter led to an unsuccessful attempt to regulate what a landing flap was. After the LS2 and the 20 of Spades exploited this gap to win the 1974 and 1976 World Championships in the standard class, the IGC banned all camber-changing devices in this class, and defined the 15-meter class to accommodate these aircraft. This decision, although it was the second change in guidelines in a few years, and also orphaned some types of gliders that did not fit into the new category definitions (especially 20 of Spades and Dragonfly , which had been produced in large numbers), was justified in retrospect by the large one Success of the new standard and 15 meter classes.

This class has been specifically defined to end the controversy over the trailing edge air brakes in the standard class. The class was very successful and has been part of all world and European championships since it was founded. However, technological development has greatly reduced the former performance gap between the standard and 15-meter classes, so that today it is only noticeable in particularly good gliding weather. Some observers therefore argue that the difference is no longer big enough, that the 18-meter class is the natural successor to the 15-meter class and that it should therefore be removed from the World Championships to make way for the new classes. Regardless, the category still has fans and official support in the near future.

The introduction of carbon fiber allowed spans exceeding 15 meters at affordable prices. Manufacturers began to exploit this potential by offering wing extensions for their gliders with flaps. The span increased gradually from 16.6 meters in the first versions ( ASW 20L and Ventus b 16.6 ) over 17 meters ( DG-200/17 , LS3 / 17 , Glaser-Dirks DG-600 , Glasflügel 403 ), 17.5 Meters ( LS6c ), finally uniformly at 18 meters. The tendency towards the turbos and self-launching gliders promoted the 18-meter wingspan, which is large enough to carry the extra weight of the engine without losing the ability to climb in weak thermals . After a decade of competitions at regional level ( e.g. Hahnweide ), which made it possible to solve problems such as the mixture of pure gliders and motorized variants, this class was first used in the 2001 World Championships. 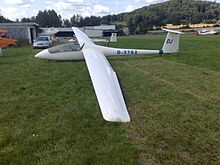 The two-seater class first appeared at the 1952 World Championships. The reason for having a class of its own was that the resistance of the two-seater's larger hull was a significant disadvantage compared to the single-seater. However, this class was discontinued after the 1956 World Championships, although records were recorded until 1996. The large spans made possible by modern materials have meanwhile eliminated the performance gap in the open class. Today, two-seaters in Open Class are increasingly common and often win. The IGC (see Fédération Aéronautique Internationale ) therefore decided in 2005 to reintroduce a two-seater class with a span limitation of 20 meters. This class is not comparable to the old category of two-seaters as it targets high-performance training aircraft that have steadily gained popularity. Their smaller size separates them from doubles in the open class, which are very expensive and require experienced teams. The 20-meter two-seaters fly similar to single-seaters, but cost a little more than half as much as an open class orchid.

The opponents in this class are mainly Duo Discus , DG Flugzeugbau DG-1000 , Arcus , as well as the older Janus and Glaser-Dirks DG-500 .

The club class used to allow gliders with a maximum wing span of 15 meters , a fixed wing loading over the flight and an unchangeable wing profile . In the meantime, membership in the club class is defined solely by the performance of the glider. All aircraft with a performance index up to 106 (according to DAeC guidelines) or up to 107 (IGC guidelines) are classed as club class aircraft. With this definition, even the first generation gliders of the 15 m FAI class, such as Mosquito, H301 or PIK-20D, are integrated as club -class aircraft .

In this glider class, turbulators are attached to the fuselage-surface transition to optimize the aerodynamic quality and to suppress a separation bubble .

The International Gliding Commission (IGC / CIVV, part of the FAI ), and the associated organization Scientifique and àvoile Technique du Vol ( OSTIV ) launched a design competition in 1989 for an inexpensive glider with medium performance, easy and safe to assemble and operate, So to fly even by pilots with little experience. In 1993 the PZL PW-5 was announced as the winner . The first world category championship took place in 1997 in Inonu , Turkey . There were three more world championships in this class, but participation and interest decreased.

At the FAI General Assembly in March 2010, the world class was converted to the 13.5 meter class and the restriction to the PZL PW-5 was lifted as the only model. In addition to the PW-5, all gliders with a maximum wingspan of 13.5 meters in this class can now take off. There are also some ultralight gliders, but also aerobatic planes such as the PZL SZD-59 with a 13.2 m aerobatic span.