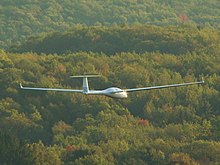 DG-505 with winglets during hillside flying in Pennsylvania , USA

When Glaser-Dirks DG-500 - later DG-505 - is a two-seater mid-wing - Glider in GRP construction method, which in the aircraft construction GmbH DG in Bruchsal was made. The sailor is available as a trainer with 18 meters or as a performance two-seater with a span of 20 or 22 meters.

From 2004 the DG-500 was only manufactured in the newest version as "DG-505 Orion" at AMS Flight in Slovenia. After the appearance of DG Flugzeugbau DG-1000 , AMS gave up the production of DG aircraft.

DG-500 on approach for landing

The hull is - apart from the additional rudder connections for the flaps in the 22 m version - always the same. The landing gear is retractable in both versions and the tail unit is of the T-construction. On the DG-500/22, the ailerons (and thus also the flaps) extend over the full span of the wings. In addition, the DG-500/22 can carry up to 160 kg of additional ballast in the form of water in the wings, which is not possible with the trainer version. The 18 m version is fully suitable for aerobatics . It is approved up to 7 g positive and 5 g negative. There are also variants with a 20 m span and winglets .

With the DG-500M there is also a self-starting variant.

On August 29, 2006, Steve Fossett and Einar Enevoldson carried out a flight with a modified DG-505 as part of the Perlan Project , during which they reached an altitude of 15,460 m. They held the FAI altitude record in the open class until it was exceeded on September 3, 2017 with the Perlan II .