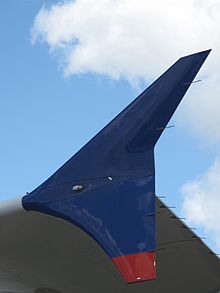 Winglets on an Airbus A380

Winglets or Sharklets (term for winglets at Airbus ) are mostly outer wings at the ends of the wings of aircraft that extend upwards and more rarely upwards and downwards . They ensure better lateral stability, reduce the induced drag and thus improve the glide angle and the rate of climb at low speed.

Winglets increase the aspect ratio of a wing without increasing the span. This brings

without having to accept restrictions in handling on the ground and greater bending moments at the wing root due to the increase in the span .

When the lift is generated by wings of finite extension, the pressure difference between the top and bottom creates vortices , from which wake vortices arise in the outer area of ​​the wing . The air flows from the underside of the wings, where there is overpressure, up around the wing tips, where there is negative pressure. With a positive wing sweep , the vortices are strongest at the tip of the wing and roll up (depending on the flight condition) to form a tip vortex. The vortices induce a downward force at the location of the wing, which creates an induced drag. Winglets now reduce the influence of these vortices by dividing the tip vortex (part goes off at the wing-winglet junction, part at the winglet tip) and deflecting it outwards through their profile. The total strength of the eddies remains the same because it is directly connected to the generation of lift. The desired reduction in air resistance is ultimately due to the fact that the wing is better used and can work more efficiently. An aircraft equipped with winglets can operate at a lower angle of attack (compared to one with an identical wing without a winglet) for a given weight and speed, because the wing tips generate more lift, so the induced drag is reduced.

Winglets must be adapted for each type of aircraft, taking into account the wing area and the expected flight speeds. For example, the additional flow around the surface develops more additional friction and pressure resistance at high speeds than it saves in terms of induced air resistance.

Winglets lead to a certain increase in the aircraft curb weight. If you want to retrofit an aircraft with winglets, there are costs for the installation. In the past, an extension was not always worthwhile; In view of the high oil price , the break-even point is reached relatively quickly today.

According to Boeing , the use of winglets can cut fuel consumption by three to five percent.

The damage, loss or dismantling of a winglet can in principle be compensated for by changing the trim .

Winglets vs. Enlargement of the span

Contrary to what is often assumed, the winglets do not bring any aerodynamic advantages compared with an equally large extension of the span. If the winglets were to be folded outwards, the aircraft would have a better glide angle and lower fuel consumption.

However, increasing the range brings the following disadvantages:

"Natural winglets" in the condor (fanned out) for slow flight

The loss of lift due to air flow around the wing edge arches had been known for a long time. After the Second World War, for example, tests were carried out on some STOL aircraft with wing tips, which mostly consisted of only one sheet of metal (e.g. PZL-101 ). These stood a few centimeters above the wing tip profile and made it difficult to flow around it. Similar effects were hoped for from so-called edge clubs such as on the Let L-13 , which were also used as wing tip tanks .

Although the geometry is greatly simplified, modern winglets are modeled on the wing tips of certain bird species. Long flight feathers, which are spread fan-shaped and staggered in height, ensure better slow flight characteristics, especially for birds of prey. Louis B. Gratzer called these upwardly curved ends winglets. He was head of aerodynamics at Boeing, examined the aerodynamics of the wings in birds and noticed the similarities (see also bionics ).

Winglets are not a modern invention. The basic idea of ​​the winglets was even registered for a patent by Frederick W. Lanchester in 1897 ; Before the Second World War there were aircraft with winglet-like wing tips. During the Second World War they were first used in the series under the name "Henschelohren" ( Heinkel He 162 ), where they were bent downwards, contrary to today's standard construction.

The oil crisis in the early 1970s prompted NASA to revisit these old patents and improve them.

In passenger aircraft construction, Airbus' winglets were introduced on the A310-300 in the form of small wing end caps (so-called “wingtip fences”). In contrast to these original end caps on the wings, today's winglets often have special profiles, which can significantly improve the desired effects. For the wing tips of the A380 , however, wingtip fences similar to those of the A310-300 were used, as newer winglet designs would have increased the wingspan to a level unsuitable for commercial airports.

Around 1980, some hang-glider manufacturers began to equip them with winglets. One manufacturer even tested "wings with feathered wings". 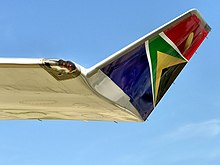 Flyover of a 747-8F with raked wingtips

There are different winglet designs and constructions, which are shown below in an overview with examples.

The transition from wingtip fences to conventional wing endplates is fluid. In tailless aircraft , end plates can also act as vertical stabilizers.

Winglet on the rotor blade of a wind turbine

Winglets can also be found on the rotor blades of some wind turbines .

Subsonic military aircraft, like passenger aircraft, can benefit from winglets, which is why some newer types have been fitted with them at the factory. However, supersonic aircraft such as jet fighters do not use winglets.

The term “winglet” is also used for the additional wings attached to the side pods in Formula 1 from the mid-2000s .