The Bombardier Canadair Regional Jet (CRJ), originally called the Canadair CL-600 Regional Jet , is a twin- engine regional airliner produced by the Canadian aircraft manufacturer Bombardier . The name still suggests the original developer Canadair . In addition to the initially only fifty-seated variants of the low-wing aircraft , extended variants have been released over the years, most recently the CRJ1000 for up to 104 passengers.

The CRJ was the first western series of aircraft in the small regional jet market and is being built at the Bombardier plant at Montreal-Mirabel Airport, northwest of Montreal . Its main competitors on the world market are the Embraer EMB-145 and the Embraer E-Jets , other comparable models are the Suchoi Superjet and the Mitsubishi SpaceJet . The entire aircraft program will be taken over by Mitsubishi Heavy Industries and will be discontinued as it is in very poor condition.

As early as 1981 Canadair - at the time not yet part of the Bombardier Group - checked whether the Challenger 600 business jet could form the basis for a 24-seat passenger aircraft with a 2 + 2 seat arrangement. Because of the large cross-section of the fuselage of the Challenger, an extension could be carried out without great difficulty. However, the plan for this aircraft type, baptized Challenger 610E, failed due to a lack of interest from the airlines and was abandoned in the same year. In 1987 the plans were taken up again at the express request of the later first customer Lufthansa . The concept based on the Challenger 601 now envisaged a much larger aircraft for around 50 passengers. The program started on March 31, 1989. The first flight of the prototype took place on May 10, 1991, the approval followed on July 31, 1992 and the first delivery finally in October of the same year.

Until Embraer brought out a similar but much cheaper type of aircraft with the Embraer ERJ-145 family , Bombardier had a de facto monopoly with the CRJ. Another competing product is the Suchoi Superjet 100 , which has been mass-produced since 2010 . On June 5, 2019, Bombardier announced that it would be in negotiations with Mitsubishi Heavy Industries to sell the CRJ program, which has been in loss for a long time. At the end of June 2019 it was announced that the negotiations had been successful and that Mitsubishi would not continue production itself after the sale, but would only have the remaining 51 ordered CRJ 900s manufactured by Bombardier. The purchase price for the program was $ 550 million, but there are also $ 200 million in liabilities .

After the CSeries and the DHC-8 program are no longer manufactured by Bombardier, the only thing left to the group is the business jet division with the Bombardier Global family and the Challenger jets.

Differences to the Bombardier Challenger 600

The main differences to the Challenger business jet are an elongated fuselage, newly developed wings that have been adapted to the conditions of scheduled flights by airlines, a higher take-off weight, an EFIS cockpit, a new landing gear, a higher tank capacity and more powerful General Electric CF-34 engines . 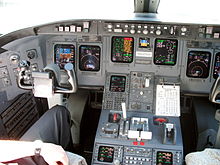 Cockpit of a CRJ 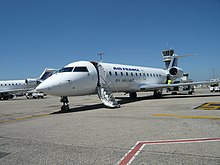 The first customer was Lufthansa CityLine . A total of 226 orders have been received for the CRJ100. With the appearance of the CRJ200 the production was stopped.

Sample designation of the CRJ100 according to the EASA identification sheet (TCDS) is CL-600-2B19.

The CRJ200 series is a further development of the CRJ100. The capacity of 50 passengers remained the same. Main difference from the CRJ100 are the General Electric - CF 34-3B1 -Triebwerke. Compared to the previous turbine, they have better internal cooling and allow longer ranges.

On October 30, 2005, Bombardier announced that it would - at least temporarily - cease production of the CRJ200 from mid-January 2006. According to Bombardier, airlines are now leaning towards larger aircraft due to rising passenger numbers and lower revenues. So far, 709 CRJ200 machines have been manufactured. (As of June 2018)

The CRJ440 is a version of the CRJ200 with a reduced take-off weight for 40 to 44 passengers. The aircraft was built with 86 copies only for Northwest Airlines .

A large number of design changes had to be made for the CRJ700, such as the shape of the winglets and the height of the landing gear. The cabin floor has been lowered slightly to increase the standing height to 1.89 m. The cabin was stretched and the wing enlarged accordingly. Slats were attached to the leading edges of the wings to improve aerodynamic performance in slow flight.

On February 6, 2019, Bombardier announced the development of the CRJ550 with 50 seats based on the CRJ700. The customer is United Airlines with 50 aircraft on order. The aim is to circumvent the scope clauses widespread on the North American market . With these scope clauses, major US airlines have committed themselves to the pilot unions to outsource only a limited number of aircraft (for example) in the range of 50 to 75 seats to subcontractors. The CRJ550 will have 10 seats in 1st class, 20 seats in Economy Plus and only 20 seats in Economy. The lower income from the reduced number of seats is to be offset by the increased number of 1st class seats. After the sale of the CRJ program to Mitsubishi, the Japanese company does not want to continue manufacturing the version. 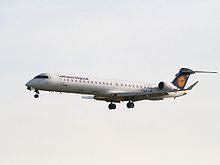 The CRJ900 version can transport up to 90 passengers over a distance of up to 3660 km. Two General Electric CF34-8C51 are used as the drive . The CRJ900 had its maiden flight on February 21, 2001. In addition to the basic version of this machine, variants with increased range (CRJ900ER and CRJ900LR) and a version for Europe with reduced take-off mass are also available. After the type's initial difficulties in selling, the model is now very popular following a large order from Lufthansa , as its operating costs are lower than those of the competing Embraer 190 . In mid-2008 there were over 215 orders and over 100 aircraft were already in service.

In May 2007, Bombardier announced the "NextGen" version of the CRJ900. The first machine was delivered in June 2007. Among other things, this will have a new interior with larger windows, LED lighting and larger luggage racks. Maintenance costs are lower and fuel consumption is reduced by 4%. The improvements of the CRJ900 NextGen were then also adopted in the CRJ700 (from 2008) and CRJ1000 (from 2009) series.

The CRJ705 (also referred to as CRJ700 Series 705) is a variant of the CRJ900 with space for only 75 passengers in order to enable multi-class seating and to comply with the Scope Clauses common in the USA . There is a variant of the CRJ705 with an increased range (705ER). The first customer Air Canada Jazz started regular operations with the aircraft in May 2005. 16 aircraft had been ordered and delivered by June 2018.

In the second quarter of 2006, Bombardier published plans for a further extension (central fuselage extended by 2.95 meters) of the original CRJ100 cell under the temporary designation CRJ900X, as the Bombardier CSeries concept intended for this market segment initially did not have the expected market success and was scaled back. On February 19, 2007 it was officially announced that the project would be built as the CRJ1000; At this time, according to Bombardier, there were 38 firm orders and 23 options for the new CRJ variant. The firm orders included 15 converted CRJ900 orders from the Italian myair . The CRJ1000, with list prices starting at approximately US $ 46 million, has a maximum capacity of 104 passengers.

The first flight, which lasted more than three hours, took place on September 3, 2008 from the Bombardier factory airport in Mirabel (Quebec) ; the first deliveries were initially planned for the fourth quarter of 2009. In order to counteract the “tube feeling” often criticized in the CRJ900 in the now almost 24 m long cabin, the windows were enlarged by 5 cm. In the cockpit improved are avionics components installed (for example ProLine 21). In addition, compared to the CRJ900, this variant has a reinforced main landing gear with carbon brake discs, more luggage space, improved air conditioning with more even temperature distribution, rudders that can be controlled by fly-by-wire and reinforced and enlarged wings (+7.5% wing area). LED lighting, larger storage compartments and indentations in the side paneling on the windows should improve passenger comfort. In addition to the standard variant and the extended range version (ER), a EuroLite version (EL) with a lower take-off mass and range (which is supposed to save landing fees) and a CRJ1025 with a higher operating mass are also available.

Due to software problems in controlling the rudder with the fly-by-wire system supplied by Liebherr- Aerospace Lindenberg GmbH, EASA approval was delayed to November 10, 2010. On December 15, 2010 the first two units were delivered to Brit Air and Air Nostrum at Montreal-Mirabel Airport .

The Bombardier Canadair Regional Jet was the first aircraft of its kind. As a "trendsetter" and initially the only aircraft in this segment in the West, the 50-seat variants were able to achieve great sales successes. 77% of all CRJs went to airlines from the United States, 17% to European airlines. Delta Air Lines operates the largest fleets of the CRJ100 / 200/440 with 142 aircraft; SkyWest has the largest CRJ700 / 900 fleet with 72 aircraft. Lufthansa was the first customer of the CRJ program . By December 2016, 1902 Bombardier Canadair Regional Jets had been ordered and delivered in 1850.

Up to and including May 2020 there were 23 total losses with Bombardier Regional Jets. 167 people were killed in 10 of them. Examples:

List of aircraft types from the manufacturers Bombardier Aerospace and Canadair