When Learjet 35 is a twin-engine business aircraft in low-wing design .

The aircraft has a two-person cockpit and a cabin for up to eight passengers who are accommodated in the 1 + 1 seating arrangement. The first flight of the Learjet 35 took place on August 22, 1973. In advance, a factory machine of the Learjet 25 used for testing purposes was equipped on the starboard side with a 15.6 kN (3500 lbf) TFE731-2 turbofan engine, with the CJ610 remaining on the other side. This flying engine test bench had its maiden flight on May 21, 1971, followed on January 4, 1973 by a fully retrofitted Learjet 25. The Learjet 35 is based on the 25E and 25F variants of the Learjet 25, with length and wingspan slightly increased and the turbojet engines against fuel-efficient ones Turbofan engines were replaced. The initial name of the new model was therefore also Learjet 26.

The Learjet 36 is identical in construction, but is intended for a longer range and has only six passenger seats. This development became a great commercial success because the engines were quiet and very economical. In 1976 the model was further developed into the Learjet 35A, which has a slightly higher take-off weight . A total of 675 series machines of the Learjet 35 model were built and then replaced in 1994 by the further developed Learjet 31A . By 2003, 46 machines were lost in accidents.

A military variant of the Learjet 35A is the Learjet C-21, of which the American National Guard has ordered 84 pieces. You are in the transport phase. 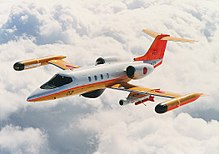