from Wikipedia, the free encyclopedia
Battle of Prague
Part of: Seven Years War 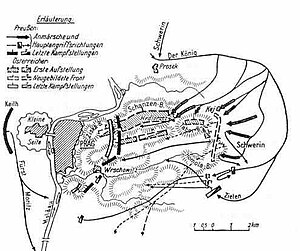 The battle of Prague on May 6, 1757 was the second battle in the Seven Years War between Prussia and Austria . Their battlefield was east of the city between the valley of the Botič near Vršovice and Žižkov , it extended over Hrdlořezy to Prosek.

The battle plays a role in the ballads Lenore by Gottfried August Bürger and General Schwerin by Georg Wilhelm Heinrich Häring .

At the beginning of April 1757, the Prussian King Friedrich II decided to move into Bohemia with four army columns and to march on Prague to defeat the Austrians there. At the end of March the 19,000-strong corps of Prince Moritz von Anhalt-Dessau had advanced via Sebastiansberg to Komotau and Brüx , in order to then unite with the king. The corps of the Duke of Braunschweig-Bevern advanced on April 20 via Ullersdorf and successfully attacked an Austrian camp in the battle near Reichenberg .

The 35,300-strong army of General Field Marshal Kurt Christoph Graf von Schwerin had crossed the Silesian border between Schmiedeberg and Glatz on April 18 . The main Prussian army with 39,400 men, under the leadership of the king, had moved from Grottau via Reichenberg to Jungbunzlau on April 20 , where it was united with the Count of Schwerin.

On May 2, the Prussians under Field Marshal James Keith enclosed the western part of Prague. The king himself went with the main power on May 5th at Selz to the other bank of the Vltava , where to the north-east of it the corps of Count Schwerin also managed its passage at Prosek the next day.

The Austrians, surprised by the rapid Prussian deployment, quickly united 60,000 men east of Prague. The commander-in-chief, Prince Karl Alexander of Lorraine , took up a position on the east side of the city, on the Žižka and Tábor mountains, a position that, in their opinion, was unassailable, as it fell steeply to the Vltava and Rokytka in the north and through a damp stream in the east cut valley was covered. Prince Karl commanded 59 battalions, 62 grenadier companies and 182 squadrons, he led the left section, where the cavalry of Count Lucchesi also assembled. In the center, Feldzeugmeister Graf Königsegg and Baron Kheul led the bulk of the infantry, Field Marshal Maximilian Browne took over the elevation of the Tabor Mountain on the right wing on the Tabor, additionally secured by the Roketnitzer Bach to the north.

Area map of the battle of Prague

The king, who had 64,000 men with him on the morning of 6 May after his union with Schwerin, decided to attack immediately. The main Prussian attack, commanded by Count Schwerin, was directed primarily against the enemy's right flank. It is true that the swampy ground presented unexpected obstacles to advance; the Austrian batteries threw the Prussian infantry down in rows, and they fell back. In vain did the 72-year-old von Schwerin stand at the head of his 24th infantry regiment with the flag in hand. First his adjutant, Count von Platen, and finally himself, pierced by five bullets, fell, and the battalions retreated again. On the Austrian side, this advantage was not taken advantage of, as there was no overhead line, Field Marshal Maximilian Ulysses Browne was fatally wounded and Prince Karl was unable to give the decisive orders because of an asthma attack.

Frederick II ordered a new attack at his second meeting, which threw back the right wing of the Austrians west of Hostawitz. The Duke of Bevern in the center and the Princes Ferdinand of Braunschweig and Heinrich of Prussia on the right wing advanced victoriously. At the same time, Lieutenant General von Zieten gathered his reserves, south of the pond of Unter-Mecholup, 45 squadrons pushed successfully against the right flank of Lucchesi's cavalry as far as the Sazawa . As a result, the Austrian regiments Harrach and Los Rios lost their flank protection. The attack near the village of Kej, now planned by the Prussian infantry regiments No. 1, 3, 13 and 17, was reinforced by the king by the infantry regiments No. 19 and 30, which were pulled over from the left wing to the north. The main thrust was set in the direction of Neu-Straschnitz. The now thrown back battle line of the Austrians was taken up by the fresh Clerici division. Count Christian Moritz von Königsegg-Rothenfels made a makeshift stabilization of his front west from Maleschitz to Neu-Straschnitz.

A new attack by Prince Heinrich encompassed the opposing positions west of Maleschitz, at the same time in the center the king pushed the front through Hrdlorzez to the west on the Wolschan-Wrschowitz line. The battle was decided in favor of the Prussians around 3 p.m., while the Austrians were pushed partly into the city of Prague and partly across the Sazawa.

The latter lost 5,000 prisoners, most of their baggage, 60 cannons and 12,000 dead and wounded. The loss on the Prussian side amounted to at least 12,500 men. Field marshal Schwerin, Colonel Friedrich Wilhelm II, Prince von Holstein-Beck and several other generals were among the dead . The serious wounding of the excellent Generals Fouqué and Winterfeldt was said to have a negative effect on the fighting strength and motivation of the Prussian army. Austria lost Field Marshal Graf von Browne, who died of his wounds a few weeks later in Prague.

Frederick II kept Prague enclosed with his now 50,000-strong army and hoped to be able to induce it to give up soon through starvation and heavy bombing. A fall of the city would probably have meant the defeat of Maria Theresa . But after the Austrian Field Marshal Daun had defeated Friedrich in the Battle of Kolín on June 18, 1757, the Prussians had to give up the siege and retreat to Saxony.

The events of Prague were immortalized in two poems by Theodor Fontane, among others .