from Wikipedia, the free encyclopedia
This is the spotted version , flagged on May 10, 2020 . There is 1 pending change that has yet to be viewed.

The Feldzeugmeister was the commander-in-chief of the artillery during the Landsknecht army . After the field captain and the field marshal , he was the highest officer in the army.

The term “stuff” was understood to mean the artillery with all its material, which was operated by the gunsmiths and their henchmen on the basis of a voluntary contract with the warlord. All the stuff was under the command of the General Feldzeugmeister , the French Grand Maitre d'artillerie . This title was already before the introduction of actual guns since Philip VI. (1328–1350) common and referred to the earlier war machines .

The Generalfeldzeugmeister had been in command of all artillery troops in Prussia since Friedrich II and ranked at the same time as the Generalfeldmarschall . He wore two crossed cannon barrels as a badge on armpits and epaulettes . In the past, the dignity of general field witnesses was often bestowed on princes from the royal house because, according to an unwritten rule, they were not appointed general field marshals before 1870. From 1870 this dignity was bestowed on officers who had emerged from the artillery and who had rendered outstanding services to this weapon. The last holder of this title was Prince Carl of Prussia as "Chief of Artillery".

In Prussia, in 1898, instead of the (provisional) weapons department in the War Ministry, a Feldzeugmeisterei outside the Ministry was created, headed by a Feldzeugmeister with the rank of division commander. All rifle factories, artillery workshops, gun foundries, powder and ammunition factories, as well as the design offices and artillery depots were under his supervision; the train inspection was also subordinate to him.

In 1906, Bavaria replaced the inspection of the technical institutes with a field engineer’s workshop based in Munich with the same field of activity as the Prussian model. The Feldzeugmeister was a service position and the owner had the rank of major general.

Also had Sachsen one Zeugmeisterei with a top-marshal with the rank of major general at the top, based in Dresden .

In Austria-Hungary , the rank of Feldzeugmeister (FZM) was a prominent general rank in the artillery, it corresponded to that

Until the creation of the rank of General of the Infantry in 1908, infantry generals were also "Feldzeugmeister". They had the title “Excellence”. 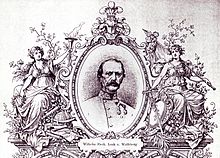