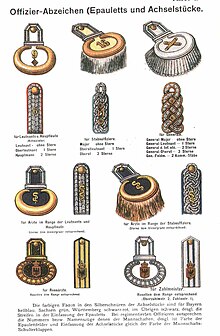 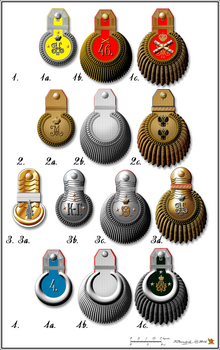 An epaulette (French épaulette , to épaule "shoulder") is a shoulder piece of a uniform . In German this is usually used to describe a special shape that differs from the simple " shoulder flap ". These epaulettes in the narrower sense consist of the crescent moons , the field , the slide and usually also caterpillars or fringes . They are held in place by a shoulder button and a passer-by, which is a transverse stripe of colored cloth or braid on the shoulder through which the epaulette is pushed.

Originally the epaulettes were used as shoulder protection against saber blows , but also prevented the shoulder straps from slipping off. In the 19th century, epaulettes were used in many countries (Austria was an exception) as a badge of rank for officers , but they also became part of the gala uniform of some higher civil servants. In most armies the generals wore full epaulettes with thick caterpillars (rigid cantilles ), the staff officers with thin fringes (loose cantilles). The subaltern officers' counter-paulettes had no fringes. In the French army, various guards and elite troops wore epaulettes made of wool (some troops to this day). Under Napoleonic influence, this temporarily prevailed in some states of the Rhine Confederation and other allies of France. In Prussia only the Uhlan crews wore epaulettes similar to the officer's epaulettes; in the other German states this was adopted during the 19th century. The officers of the German and Russian armies wore shoulder boards in the field . The officers of the German navy also wore epaulettes with their large uniforms until 1939.

In France , the teams of the Foreign Legion wear cloth paulettes. Today epaulettes are also used in fashion to emphasize the shoulder.

In chess there is the epaulette mate . Here, the king's own figures stand on both “shoulder sides” and block escape areas .