The saber is a light cutting and stabbing weapon . The classic saber was curved and only sharpened on one side. It was the typical weapon of light cavalry , such as the hussars . Today sabers are also used in sport fencing , but they have little more in common with historical weapons than their name.

The origin of the word saber and related names in other European languages ​​(Italian sciabola , Spanish sable , French and English saber ) has not yet been conclusively clarified. In German, the word was borrowed from a language of a neighboring country in Central Europe, probably from Hungarian ( szablya ). Dialectal variants in German with postalveolar initials (such as Schabel ) suggest, however, that in other regions the word was rather taken from Polish ( szabla ). Russian сабля and Czech šavle are evidently quite recent borrowings from either Polish or German.

The further etymology is not clear. Contrary to the assumption that it is an Ur-Hungarian word (to szabni , "to cut"), various Slavic ( sabl , "cock"), Turkish ( sap "handle, shaft") and Semitic (Aramaic sajpa , "sword") were used. ) Roots listed. A more recent study by Marek Stachowski sees the origin of the word in a tungusic seleme (to sele , "iron" + denominative suffix -me ; for example in Manchurian seleme , "dagger"). This etymon may have spread as a wandering word through the hordes of the Avars into Hungarian and Slavic and thus into the other European languages. 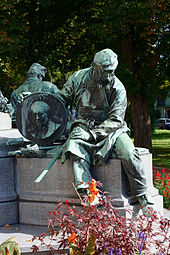 Bronze figure of a saber maker (part of the Werndl monument in Steyr, 1894)

The military saber has a blade that is only sharpened on one side. In many cases, however, the back of the blade is also sharpened to the first 10–30 cm from the tip ( back edge ) in order to achieve an effect on the backhand strike and to improve the impact properties. In a few cases a triangle was ground into this cutting edge, the purpose is unclear. One theory is an additional tear effect, but the risk of entanglement with loss of the weapon is high. According to another, more likely theory, the triangle is used to pick up objects lying on the ground without having to sit down. The blade is curved to different degrees depending on the owner's preference (see below). Sabers were used primarily by the light cavalry ; lighter models came into fashion with the infantry towards the end of the 17th century (e.g. Bavarian grenadiers under Maximilian II Emanuel ) . But soon many armies switched to using only the bayonet again. The short infantry sabers remained with the grenadiers, in some states, e.g. B. in Prussia, also generally used as status symbols. In addition, the officers of the tirailleurs soon wore longer, finer sabers, while the remaining officers mostly stayed with their swords .

The saber originally comes from the Indo-Persian region and was used in the first millennium mainly in Asia and North Africa, but also in Eastern Europe. Curved blades are less suitable for piercing armor than the straight edges of a sword , but until the High Middle Ages only relatively light armor was generally used anyway. The curvature of the blade caused significantly larger wounds than with straight blades - provided you had enough practice, otherwise you usually hardly caused any damage. Besides, with a suitably curved saber, it didn't matter if you hit the opponent with the middle part of the blade; with straight swords or rapiers, on the other hand, you should hit it with the front part in order to cause enough damage. That is why a long, straight blade is rather a hindrance in hand-to-hand combat in a confined space - at least for the average fighter. In Western Europe the saber was initially of little importance; But that changed when sabers were used on a larger scale by the Croatian cavalry at the beginning of the Thirty Years' War and by hussars during the 18th century .

Depending on the curvature ( arrow height ) of the blade, the saber is also suitable as a stabbing weapon ; with increasing curvature (greater arrow height) then only as a cutting weapon , whereby the stab has a clear range and above all accuracy advantage compared to the cut. Wounds that are not so large can be created, but they are usually deeper. The saber was mainly used by the light cavalry ( Uhlans , Hussars , Cossacks ); The main task of these troops was reconnaissance and quick raids on supplies. The heavy cavalrymen, the cuirassiers and mostly also the dragoons were armed with the heavy saber, the pallasch .

The classic oriental saber ( scimitar ) is strongly curved and very wide and therefore rather unsuitable as a stabbing weapon. Despite all the clichés, the typical saber shape with widening towards the tip can be demonstrated for the first time in the Muslim area, and in a very timid manner, in the late 13th century. It does not seem to have become widespread until the 14th century. In the Ottoman- ruled areas, the previously common saber shape was, on the contrary, tapered towards the tip, had no back blade and usually no pommel.

The shashka of the Cossacks were narrower and better suited for stabbing ; these also have a particularly simple vessel (= handle). In the 18th century Europe also switched to somewhat narrower blades; In the 19th century , slightly curved models appeared, which were later used by many heavy cavalry units.

The hand protection can vary widely, from the basket that completely encloses the hand to simple brackets to the original, rudimentary crossguard (like the classic scimitar). The length is usually between 70 and 100 cm, the weight ranges from 700 to 1400 g.

In various armies, sabers are still worn on representative occasions.

The academic saber is one of the three fencing weapons used by students , along with basket bat and bell beater . It differs from the basket bat in the blade and in the basket. The saber blade is heavier, curved and has a fuller . The basket has a blade catcher on the blade. During duels, the basket was partly wrapped in silk fabric to prevent the blade from being struck jaggedly and causing more serious injuries. The academic saber is a dueling weapon and is therefore (officially) no longer used in Germany today. In Austria, sabers are sometimes used as a drumstick.

The development of the student saber goes back to the middle of the 19th century. During this time student fencing with the basketball or bell striker developed away from the duel towards the scale in the current sense. For honor disputes, the student saber was developed from the military saber in the 1840s and was in use until the Third Reich.

Student fencing was also practiced in Switzerland and Austria, and scales are still played today with rackets. In Switzerland, sabers and pistols were part of the regulations of the Swiss Ring of Arms until the second half of the 20th century. In practice, however, they were no longer used. 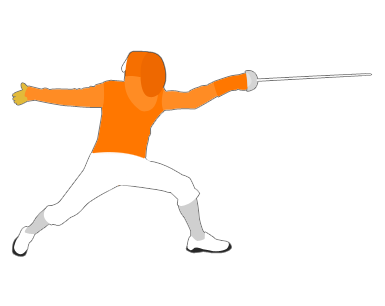 Hit area with the saber

The saber for sport fencing is a maximum of 105 cm long. It can weigh a maximum of 500 grams, but is usually considerably lighter. It has a mostly personally curved blade with an indicated (blunt) cutting edge. The saber has a bell that protects the palm. Unlike the rapier and the foil , it has a bracket that protects the hand against blows. In addition, the handle of the saber differs from that of the foil and sword. It has no indentations for the fingers and can be held anywhere.

The hit area is the entire upper body including head and arm, whereby in contrast to the foil, the step is excluded. Lashes also count as hits. Saber fencing is usually faster than foil fencing. As with foil, there is a right of attack . The electronic hit display was introduced in saber fencing in 1988. Touching the saber blade with the opponent's e-vest, e-mask or the opponent's e-glove closes a circuit that indicates a valid hit. Invalid hits are not displayed in saber fencing.