The title of this article is ambiguous. Further meanings are listed under Degen (disambiguation) .

The term Degen can denote a number of different bladed weapons in German, depending on the historical context. Common to all arms designated as a sword that they are primarily designed for the casting, as opposed to the designed to chop or cut saber or Pallasch or knife .

The German word Degen did not appear until around 1400, that is, in early New High German , and initially referred to a dagger , more precisely a stabbing dagger or roundel dagger; only in the course of time did it take on the meaning of "(narrow) sword ". The word is evidently a borrowing from the Old French ( African dague , first documented in 1229), its further derivation is uncertain. According to a hypothesis put forward by Hugo Schuchardt in 1901 , it goes back to a vulgar Latin * daca [ensis / gladius / spatha] " Dacian [knife]"; What speaks against a Latin or Romance origin, however, is that the Provencal , Italian and Spanish languages Spanish daga were not documented before the 14th century and are in turn probably borrowed from French. Much earlier and more often appear daga (also Dagua and similar) since the 12th century in various medieval Latin manuscripts from England, Scotland and Wales; this word, which resulted in English dagger (also Dutch dagge as well as Danish, Swedish and Norwegian daggert , "dagger" or "short sword") and probably with afrz. dague is identical, could ultimately be of Celtic origin, but until today it has not been possible to find a corresponding etymon in older Celtic sources.

Degen , meaning “stabbing weapon”, should not be confused with the homonymous German word Degen , which means “hero, warrior” , but has the same name but is not etymologically related . However, the two words with their different meanings have mixed up in the expression "warrior", which actually referred to a cutting weapon (a "hew sword"), but is now used in the sense of "battle-hardened old man", mostly jokingly.

Sports sword with a French handle

The sports sword is a stabbing weapon with a long, narrow, triangular, elastic and straight blade . The epee is now a discipline of Sportfechtens . Unlike in the other branches of weapon ( foil , saber ), the whole body can be hit. The blade is also here with handle 110 cm long, said handle and bell take cm maximum twentieth The entire weapon weighs a maximum of 770 g. In the case of blades approved by the International Fencing Federation (FIE) , the blade is made of maraging steel . The epee cable is three-core like the foil cable. The third wire is used to isolate the bell in the epee, and as a pick-up contact on the e-vest with the foil.

The sword was also a rank weapon for officers and cavalrymen , as well as a side guard , i.e. H. Bare weapon carried on the side with a long, straight, narrow, single or double-edged blade, which was predominantly available as a stabbing weapon ( thrusting sword ), but also as a cutting weapon ( knight sword , pallasch ). It was worn by officers in most armies.

Shapes were u. a. the German infantry officer's sword , the pallasch of the cuirassiers and the cavalry sword .

A sword with a broad blade (a knight sword) was called a thumb . Strikes on the back with a flat fist were used to punish NCOs and cadets.

The mourning sword was to be put on during court mourning, later wearing it also became popular for civil mourning. The design was deliberately kept simple and tried to prevent the light reflection that is otherwise common with edged weapons as far as possible. The handle and vessel (crossguard, bow) were made of tarnished and therefore hardly reflective iron, the handle was sometimes wrapped in black crepe. The scabbard was made of black leather. Mourning swords are still worn by the horsemen in Hamburg today .

Up to the end of the 19th century, swords were used as a weapon in the upper classes of society to fight duels . The duel on cut was carried out among students with bell-beaters , i. H. those swords on which the hand was covered by a bell, a crossguard and a bow, or with basket clubs , d. H. such swords, which had a metal basket instead of a bell.

The duel between officers was carried out with the weapon customary in their troops, these were usually swords with a brass guard, a quillons and a bow. The duel was also fought with the sword among civilians.

A special form of the sword that allowed concealed carry as a walking stick, was the so-called sword-cane . The gallantry sword was part of the suit of every educated person; it was worn on a belt slung over the shoulder or attached to the waistband with hooks. A sword in a leather sheath was also used for the civilian uniform of soldiers.

Since the beginning of the 19th century, swords were only used by officers and heavy cavalry , the so-called Pallasch . Even today there are swords in various armies, at military academies and for dress uniforms . The sword that goes with the uniform is called a portepee . 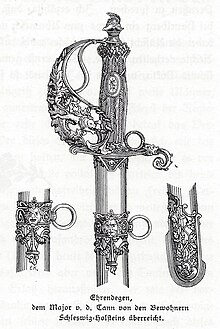 Sword of honor from Schleswig-Holstein for Major v. the fir
→ Main article : sword  and rapier

Both the rapier and the sword were initially weapons “on strike and cut”, on the other hand, in Spain, the Toledo, a rapier with a long, thin, and probably three-edged and four-edged blade, emerged. This had an elaborate handle and hilt (hand protection), guard (cross piece between the handle and blade ) and ironing.

The sword has been worn by cavalry and infantry since the 16th century . The weapon differed from the curved shape of the saber because of its long, narrow blade and its straight shape . The hunters on horseback also wore the sword.

The Pallasch from 1854 (blade 1 m) of the cuirassiers in the Prussian army was considered a sword model. The cavalry sword for the other cavalry regiments was copied from this in 1889 , as was the infantry officer's sword . which has been used by all foot troops, excluding foot artillery, since 1889. Artillery officers wore the artillery officer's saber , mounted field artillerymen, train soldiers, etc. wore the artillery saber .

Both types of swords were carried first in a leather sheath with fittings and later in a steel sheath for the army of the German Empire . The cuirassier officers only wore their swords as an overcoat . The naval sword was similar to the infantry officer's sword, but had a different basket hilt with an ivory handle and was carried in a leather sheath with metal fittings. The belt used to strap on the rapier or saber consisted of body, carrying and dragging straps made of white or black leather, with officers the leather was covered with gold or silver braid or lacquered.