Cuirassier is a redirect to this article. For the Austrian tank destroyer see Kürassier (Panzer) . 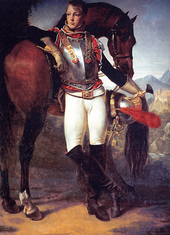 Officer of the Hessian Gardes du Corps around 1835

Kürassiere (initially also Kürisser called on Cuirassier of French cuirasse for " Leather armor " of cuir "leather") are one with cuirasses mentioned breastplates equipped branch of service of the heavy cavalry . In addition to the lancers , they emerged in the early modern period and, as "heavy riders", formed the counterpart to the Chevaulegers . The term cuirass came up in the 15th century in the German-speaking area and referred to the leather armor of the upper body. The name Kürisser was derived from this around 1500 . Although the armor was soon mostly made of metal and armor on the arms and sometimes the back was omitted, the term held up. At the beginning of the 17th century the heavy cavalry consisted only of cuirassiers, while the name itself only became common practice in the coalition wars. In some European armed forces, some regiments use the term in their association name for historical reasons or still wear the cuirass on ceremonial occasions.

The cuirassiers were the link between the armored lancers of the Middle Ages and the modern cavalry. The emergence of this branch of service was triggered by the appearance of wheel lock pistols in heavy riding. Cavalry units armed with pistols fought for the first time in 1547 in the Battle of Mühlberg . The cuirassiers emerged from them. Until the 17th century the cuirassiers wore a so-called trot harness , which reached up to the knees and had a closed helmet or a balaclava . Since the 16th century, the typical armament of a cuirassier consisted of two pistols and a rapier or riding sword or a sword . Against the pikemen , the cuirassiers developed maneuvers like the Caracolla . Above all men of the upper class tried to be accepted into a cuirassier unit, whereby they wanted to tie in with the knightly ideals of the Middle Ages.

One of the most famous cuirassier regiments of the Thirty Years' War was that of Count zu Pappenheim , which became proverbial as "the Pappenheimers". At this time, the old standard Caracolla tactic was also abolished by Gustav II Adolf of Sweden , now only the two foremost ranks fired, then close combat was used. As a result, the depth of the formations gradually decreased; after this war there were only three members.

Since the second half of the 17th century, the cuirassiers started to wear only a chest and back armor, the cuirass, and sometimes an open helmet , the zischägge . The latter finally had to give way to the hat ( tricorn ) with hat cross, an iron ribbon cross that was worn over or under the head of the hat to protect against blows. At that time and then in the 18th century, the cuirassiers were typically armed with two pistols , a carbine and a pallasch - a heavy equestrian sword . In the Turkish wars volley fire was sometimes common, in wars between western states hand-to-hand combat reigned - even if all firearms were often fired beforehand. By the middle of the 18th century at the latest, the gallop attack with the pallasch became the most important form of combat, the firearms became secondary, some states later - at least temporarily - abolished the carbine . The one or two pistols were now primarily used to sound the alarm, and they were occasionally used in uncontrolled scuffle.

At the end of the 18th century, the heavy cavalrymen in many countries no longer wore a cuirass (or only the breastplate) and no hat cross. But Napoleon increased the number of his cuirassier regiments from one to fourteen, all of which received the full cuirass and a metal helmet with a horsehair tail. In addition, in 1810 he equipped the elite of his heavy line cavalry, the two carbine regiments (until then equipped like grenadiers on horseback ) with cuirasses and helmets. The cuirassiers were the cavalry of the first empire par excellence and in numerous battles led the decisive thrust into the ranks of the emperor's enemies. Friend and foe followed the French example, but Austria stuck to the half-cuirass.

Although the breastplates only protected from rifle shots from a distance of around 70 meters, the French cuirassiers rode frontal attacks against infantry formations , often suffering heavy losses. In the Battle of Waterloo , the waves of attack by the French cuirassiers against the British infantry squares were ultimately unsuccessful, and many cuirassiers were killed. The last Austrian cuirassier regiments were converted into dragoons after 1866 due to improved firearms .

In some European countries, especially in France, the experience of the Napoleonic wars had such a lasting effect that the cuirassiers remained the backbone of the cavalry until 1914 and their appearance was only slightly adapted to contemporary tastes. For example, a French heavy cuirassier brigade attacked the German infantry in the battle of Wörth in 1870 and was completely wiped out.

In the trench warfare 1914-1918 gave way horsehair helmet and spiked helmet and breastplate soon helmet and camouflage. But even today some tank regiments such as the 12e régiment de cuirassiers are the last regiment to use this generic name for reasons of tradition. The British Household Cavalry never wore them, but on ceremonial occasions they wear a cuirass and helmet.