This article is about a hat shape. For more meanings, see Dreispitz (disambiguation) . 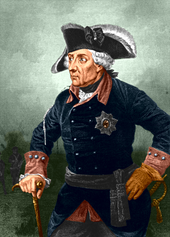 Friedrich II of Prussia with a three-cornered hat

The three- cornered hat or three-master , popularly also sometimes known as Nebelspalter (due to the forward-pointing tip), is a hat shape with a three-part, folded-up brim.

The three-cornered hat appears to be the result of a development from the round hat with a wide brim by Spanish soldiers ( Eighty Years War and Reunion War (1683–1684) ) for the purpose of better protection against the weather conditions in Flanders during the 17th century, when the brim came first on one side, then turned up all around on three sides. By turning up the brims of the hat, you got a triangular shape so that the rain could run off at the corners. In 1683 war broke out between France and Spain in the Spanish Netherlands. During the military conflict, the use of the tricorn also spread to the French armies. Cockades , bows and similar accessories were often attached to the brim , which functioned as a sign of belonging to a group or nation or as an expression of loyalty to a ruler.

The three-cornered hat, together with the braid, determined men's costumes in the 18th century. Officers and the nobility in particular preferred to wear this hat shape. At the beginning of the 18th century it was worn under the arm so as not to mess up the wig (chapeau bas) . Around 1720 the tricorn also found its way into bourgeois clothing . While he disappeared from the military costume after 1786 and was replaced by the bicorn hat , he kept in bourgeois clothing until the 19th century.

Nowadays the three-cornered hat is often part of the traditional and also modern uniform of the carnival guard dance , where it is usually adorned with a plume . In Franconia it is still part of the traditional local costume today . Sometimes the tricorn also belonged to the costume in some regions of Hesse . In Erwitte , North Rhine-Westphalia , the bachelor rifle club Erwitte wears the three-cornered hat as part of the historical costume in 1726. Here it comes in different shapes, with and without feathers, with and without silver or gold braid. A round cockade is attached to the three-cornered hat. There is evidence that this hat shape was already worn by the Erwitter shooting clubs at the time of the reorganization after the Napoleonic Wars around 1815–1821.