The title of this article is ambiguous. Further meanings are listed under pistol (disambiguation) .

The pistol is a firearm and belongs to the category of handguns . She will u. a. defined by the German Weapons Act (WaffG) as a handgun (handgun). Differences today are single - and multi-loader pistols and revolvers . The latter are either counted among the pistols, depending on the legal situation and the provisions of the user, or are on an equal footing with them as a separate category of handguns.

Matchlock pistol of a samurai

The "Puffer" wheel lock pistol around 1580

The word pistol is often attributed to the French pistolet , but comes from the Czech language, the Hussites first used such weapons (píšťala).

The story of the (single load) pistol begins parallel to the story of the rifle . If the hand tube was the first firearm in the 14th century, after the further development to the arquebus it became necessary to make these weapons smaller, handier and more mobile. In particular, the cavalry of the armies of the late Middle Ages pushed for an alternative to the arquebus.

Revolvers are multi-shot pistols in which several rounds of ammunition are loaded in a rotatable drum. In contrast to pistols, in which the cartridge chamber is in the rearmost section of the barrel bore, in the case of the revolver it is located in the barrel bores.

In 1837 Samuel Colt began the serial production of percussion revolvers at Patent Arms M'g Co Paterson , the further developments of which played an important role in the American Civil War . As early as 1858, the Smith & Wesson company launched the small-caliber S & W No 1, the first rear- loading revolver that fired prefabricated cartridges that were loaded into a rotating drum. As early as 1869, after the Rollin-White patent , which protected the manufacture of revolvers with a pierced drum, expired , large-caliber revolvers were developed that dominated the market until the end of the century. Well-known examples are the Colt Single Action Army , the Smith & Wesson No 3 and the English Webley revolver . These were used worldwide as military and police service weapons. 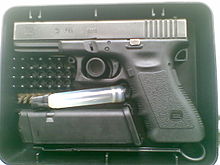 The development of modern pistols began towards the end of the 19th century. Self-loading designs, originally developed for rifles, were soon used for the first modern pistol models. The first fully functional self-loading pistols included the Borchardt C93 and the Parabellum ( Luger ) developed from it , the Mauser C96 and models from Bergmann and Browning .

The modern pistol soon aroused great interest in the armies, as it had a number of advantages compared to the revolver, which is now widely used. Pistols usually had a higher ammunition capacity than revolvers, and after the shot the firing mechanism was already cocked, the cocking of the cock required for revolvers was omitted. In addition, they could be reloaded more quickly because the empty magazine was removed and replaced with a full one. Even loading strips (used on models without an interchangeable magazine) were faster and easier to use. Filled pistol magazines were also easier to handle and stow away than individual cartridges, which meant that larger amounts of ammunition could easily be carried.

Only the complex maintenance of the pistol is a disadvantage compared to the revolver. Regular maintenance is essential to ensure that they function properly, whereas revolvers are less prone to failure. In addition, the pistol may occasionally jam . Nevertheless, the pistol prevailed over the revolver as an orderly weapon in the military. Already in the First World War , most officers and orderlies in almost all armies were equipped with pistols. One of the few exceptions was the British Army, which traditionally used revolvers during World War I.

Today there is a wide variety of pistols for sporting, police and military use.

Today, the only thing in use is the self-loading pistol, repeating pistols with magazine feed are largely collectibles and curiosities.

Most signal pistols are also single-shot.

An early development of the repeating pistol is the so-called harmonica gun . Repeater pistols have a supply of ammunition, albeit mostly small, from which individual cartridges can be reloaded via a manual repeating process. These are mostly older pistol models (e.g. Semmerling LM4 ) or multi-shot sport pistols for silhouette shooting at greater distances (mostly equipped with rifle repeating systems), such as. B. the Remington XP-100R pistol.

In contrast to fully automatic pistols (submachine guns or in-line pistols), the trigger must be pulled again to fire the self-loading pistol (semi-automatic) with each subsequent shot. In today's parlance, self-loading pistols are generally referred to only as pistols.

Self-loading pistols were manufactured from 1893 (Borchardt C93). The reloading process is usually triggered by the recoil . With pocket pistols, the lock is usually an unlocked ground lock . For heavy loads, however, the barrel and bolt must be locked, which can be done with a knee joint ( Pistol 08 ), a swivel bolt ( Walther P38 ), twist lock ( Steyr M1912 ) or a tiltable barrel ( Browning system ). Pistols with a delayed mass seal like the HK P7 are rarer . The reloading process can also be powered by diverted gas, but such pistols that function as gas pressure chargers are rare ( Desert Eagle ).

From a technical point of view, self-loading pistols are generally differentiated according to the type of breech and lock. A distinction is made between unlocked and locked systems for the types of lock.

When it comes to the lock of a pistol, i.e. the firing mechanism, a distinction is made between the firing pin, hammer and hammer lock. Pistols with a firing pin lock are z. B. the Browning 1900, FN 1910 to the Glock. The work here is done by the tensioned spring-loaded bolt, whose mass and its ignition tip ignite the cartridge (bolt that strikes itself). In the case of the cock lock, a hammer that can be grasped by the thumb strikes a firing pin (a pin that is struck to ignite), which transmits the power and ignites the cartridge. The Colt pistol M. 1911, including the Walther PP, and many other modern pistols should be mentioned as examples. The hammer lock, which is also known colloquially as the internal hammerless lock, does not have a hammer that can be grasped by hand, hence this name. The striker also strikes a firing pin, which transmits the force for firing. That is why there is a difference between firing pin and firing pin in terms of weapon technology.

After firing of a cartridge which pushes recoil or gas pressure the closure ( slide or shutter piece) backwards, whereby the closure is unlocked in locked systems. The extractor (extractor claw) attached to the breech pulls the empty cartridge case out of the chamber using the groove provided for this purpose.

The locking between barrel and bolt is required from a certain power, since the bolt would open without the locking while the bullet is still in the barrel. The result would be that the cartridge case, which cannot withstand the gas pressure without the cartridge chamber surrounding it, would be blown up by the gas pressure. The gunner or third parties could be injured by the sleeve parts flying out of the ejection window, and the function of the weapon would no longer be guaranteed.

In the further return, the sleeve held by the extractor meets the ejector , which is usually attached to the inside of the handle of the pistol. As a result, the case is ejected laterally upwards through the ejection window of the breech, while the breech continues to run back and cocks any striker (hammer, hammer) that may be present.

Once in its rear position, the locking spring (closing spring, feed spring) pushes the lock back to the front. The bottom edge of the slide feeds a new cartridge from the magazine to the cartridge chamber, while the extractor grips the groove on the bottom of the case again. In the case of locked systems, the lock locks in the further advance. Once in the foremost position, there is a new cartridge in the chamber and the hammer is cocked. For another shot, the shooter only has to release the trigger and pull it again.

Most shooting sports associations use self-loading pistols for sport.

In the field of hunting , self-loading pistols are used for searching or for catching a shot (injured or sick game). Healthy game may not be hunted. The exception to this is building and trapping. The federal and state hunting laws apply irrespective of this.

Series fire pistols are self-loading pistols that can be switched to series fire (possibly limited number of shots). In addition to an often reinforced construction, they have a larger magazine capacity and also mountable handle and shoulder rests. Typical representatives of modern in-line fire pistols are the Beretta 93R and the VP70 .

A sport pistol is a pistol that is manufactured and used for the purpose of sporting competition (sport shooting).

Classic submachine guns are provided with a shaft and are shot with the shoulder stop like rifles. They usually fire pistol ammunition. The assignment to the pistols is controversial due to their different size, construction, the possibility of series of (continuous) fire and the ammunition used.

With a rocket pistol, the hot gases exit through nozzles on the edge of the cartridge base and thus accelerate the entire cartridge - this turns into a projectile as a whole. The best known example is the 1960 US-made Gyrojet -Gun.

Signal pistols (also light pistols, incorrectly called rocket pistols in Switzerland ) are large-caliber, smooth-barreled firearms with which signal cartridges can be fired in the form of different-acting light cartridges or acoustic signal cartridges. There are single-barreled, rarely double-barreled versions of these pistols, which usually have a drop barrel lock .

It is also of interest that during World War II a variant of the flare pistol , the combat pistol, was used on the German side for firing grenades with a caliber of 26.25 mm. It differed from the flare pistol with a smooth barrel in that it had a rifled barrel and an embossed Z on the left of the housing.

Blank pistols only make noise without firing a projectile. However, depending on the type of ammunition, unburned powder residues, combustion residues and hot gases escape to the front of the barrel and can endanger and injure people in the immediate vicinity. Special CS gas or pepper ammunition can be used for self-defense. They can also be used as starting pistols for sporting events. In addition, it is also possible to fire pyrotechnic or signal ammunition, mostly from screw-on launching cups.