Single shot rifle: over and under shotgun

Drop barrel guns are handguns , mostly long guns , revolvers and single-shot target pistols , in which the cartridge chamber is released by tilting the barrel or barrel assembly , thus enabling loading. Even compressed air weapons such as air rifles are usually made ready to fire again by tilting the barrel.

Modern break-open rifles have extractor claws or ejectors that pull or eject the empty cases from the chamber when the gun is opened, thus making reloading easier. The break-barrel system is mostly used in hunting rifles such as shotguns , rifles , combined weapons , as well as revolvers and signal pistols . The repeating system has prevailed for single-barreled rifles and shotguns .

Over and under shotgun disassembled

Side-by -side shotgun with Lefaucheux ignition

Drop barrel weapons can be dismantled into the following parts without tools:

In modern shotguns and classic treble hooks , the locks are mainly cocked when the barrels are bent. The weapon is ready to fire again after loading and locking. A separate ball clamp is used on some triplets.

Single shot rifles usually have a cocking slide on the top of the receiver, which, depending on the model, is cocked separately for each shot.

Shotguns and bullet weapons with one or two barrels lying next to each other are also made with external taps.

The following locking systems for drop barrel weapons are common: 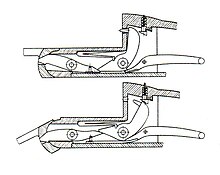 The following locks are common and are to be regarded as main categories:

The following types of weapons are common. The combination possibilities of barrels are only limited by the skills of the gunsmith and the ease of use:

Note: Weapons with barrels arranged one above the other are sometimes referred to as “over and under rifles / shotguns”. This is a pleonasm ("white mold"). In weapons technology, barrels lying one on top of the other are correctly referred to as "Bock ..." ("jacked up"), barrels lying next to one another as "Double ...". A "double weapon" would have to have four barrels. 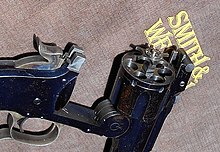