The hunting rifle Drilling is a drop barrel rifle that combines three rifle barrels in one weapon. Here, shot - and rifle barrels combined and as a combined weapon called. If several rifles are used, these can have different calibers .

Classic three of a kind 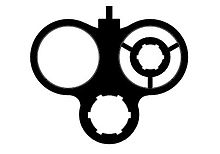 Today the classic treble is mostly used by hunters who hunt various game species in the area . The mostly large-caliber bullet is mainly used for hoofed game and predatory game . With the two shot barrels, small game with the exception of roe deer are hunted at distances of up to 35 m. With this combined weapon the hunter is prepared for all hunting situations. With classic triplets from the post-war period, there is usually a slide lock on the left side of the receiver as a safety device.

In practice, hunters often increase this flexibility by using an insert barrel in the right shot barrel , earlier as a short barrel of 22 cm or 44 cm in length in .22 lfB or .22 Magnum; Today there are insert barrels in almost all common calibers (.22 lfB - 9.3 × 74 mm R). These are mouth-long, which means that hardly any contamination can arise in the shot barrel. In many classic triplets, especially older ones, only insert barrels with low gas pressure are installed, for example .22 Hornet or 6 × 70 mm R. The insert barrel is usually used in the shot barrel whose trigger is also used for the barrel (right Shot barrel) and therefore has a set trigger .

Recently, triplets have also been manufactured with exposed barrels in order to avoid the point of contact being shifted due to the heating due to the associated expansion of the running metal.

The classic three of a kind usually only has two triggers for firing, with the front one acting either on the lock of the right shot barrel or, after switching over, on that of the barrel barrel. The rear one, which usually has no set trigger, acts on the lock of the left shot barrel. In older models, when you switch to "ball", the rear sight attached to the running rail is set up. With the use of telescopic sights, this is no longer relevant and is not necessary with modern triplets. The locks of the triplets are usually mounted as "lightning locks " on the trigger plate. There are also higher quality models with side locks or with separate tension for the lock of the barrel. Because of the high trigger weights, the triggers for the rifle barrels are provided with set trigger points . These fine deductions are dangerous because they trigger even at low loads and lead to doubling, if z. B. the rear trigger is operated when the front trigger is pierced. Firing both shots at the same time puts a strain on the weapon and can injure the hunter, apart from the failure of the shots. Modern triplets have different trigger designs that make the trigger superfluous.