The title of this article is ambiguous. Further meanings are listed under engraver (disambiguation) . 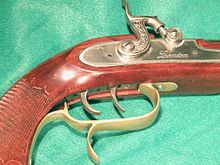 As Stecher also piercing lock or set trigger is called a deduction of firearms , the extremely sensitive. The slightest touch is enough and the shot "breaks", i. i.e. it is triggered. As a rule, a firearm has a high trigger pull , which has to be overcome in order to trigger the shot. The high trigger weight exists so that no shot is released unintentionally. This resistance is greatly reduced with a prick. In order to be able to use the engraver, it must be "pierced". This is done mechanically and for safety reasons only directly before the shot is fired. The purpose of stabbers is to prevent the weapon from tearing when the shot is fired by pulling the trigger too quickly, jerkily or forcefully, due to the trigger being too stiff. The desired pull-off resistance of the trigger can be adjusted with the help of an adjusting screw.

There are two different types of piercers. With the French or set trigger, the trigger is simply pushed forward; the German set trigger or double trigger set consists of two trigger tongues, with the front trigger forming the actual trigger and the rear trigger being used for piercing.

Both systems can also be pulled off directly without piercing beforehand, but then with a significantly higher pull-off resistance.

There have already been set triggers on crossbows . The tremendous pull of the taut bow caused a very high pull force and a very long pull path. The one like the other is a disadvantage for a precise shot. With the very precise wheel locks , the pull-off force - i.e. the resistance of the trigger - was insignificant. Since the fulcrum of the trigger was still above the starting point of the pawl in the lock, there was again an unfavorably long lever path when the trigger was pulled. Both problems - resistance and long lever arm - could be overcome with a "swab" or a trigger, which is practically a lock on the lock.

While the lock is inserted into the side of the weapon, the trigger is located in a shaft that is cut into the shaft from below. The spring forces, which are sufficient to lift the trigger rod (trigger pawl) of the lock so far that it slips out of its notch, are less than the spring forces of the lock that are needed to spark the flintlock or to ignite the primers invented later . This results in the low resistance. The rear tongue is the extension of a small, spring-loaded hammer, which, as described above, is stretched when “piercing”. The weapon is brought to the stop, pierced with the index finger and a light dab on the front tongue is enough to let the trigger strike against the pawl of the lock.

German engraver stabbed, with the screw between the triggers the overlap can be adjusted

French engraver stabbed, the screw behind the trigger can be used to adjust the grip

In these early engravers, the rear tongue has the typical slightly rounded shape of a trigger, while the front tongue protrudes vertically from the weapon like a thin nail (needle stick).

In the second half of the 18th century, the idea of ​​making this shutter release more massive and providing it with an extension that was not visible from the outside, which - angled backwards - made it possible to use this front tongue like a conventional trigger ( see image). The shooter now had a choice whether to stab or not. The operational readiness of the weapon did not depend on it.

The French set trigger mentioned above was first used on luxury weapons towards the end of the 18th century. The facial expressions are much more complex. When piercing, it is not the tongue itself that is tensioned, but a spring-loaded component that is not visible from the outside. If you dab on the tongue, the lock that holds this hammer in position is released. If not inserted, the engraver works like a normal trigger. A component necessary for the use of the trigger is the fly, also known as a sling wedge. So that the wedge-shaped front part of the trigger bar of the flintlock or percussion lock does not get caught in the half or loading latch after the trigger pulls the trigger bar out of the full or Has struck the tension notch and the hammer started moving under the weight of the spring, the locksmiths cut a recess across both notches in the nut or cock shaft. The fly, a small wedge-shaped component, can move back and forth in this recess. If the cock is cocked again, the trigger bar first pushes the fly before the full stop and locks into the loading stop. Now the primer can be filled with powder and closed, or a primer is placed on the piston of the percussion weapon. The gun is on. If the hammer is fully cocked to fire the trigger, the trigger bar slips into the full rest and the fly jumps over the half rest, which effectively prevents the trigger bar from getting stuck in this position.

In modern competition rifles, the trigger can usually be found on the free pistol . Since the target distance of 50 m is unusually large in this discipline, the shooter should be given a certain relief by means of a lower trigger force.

A fly in the nut allows the use of a piercer