Animation of the functionality

Lighter with wheel and stone 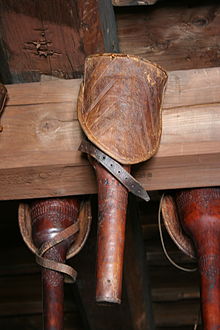 A wheel lock (also called "German lock") is an ignition device that can be found on historical muzzle-loading weapons .

The wheel lock was a relatively safe and reliable alternative to the conventional matchlock and enabled the development of smaller firearms. It consists of a friction wheel profiled with longitudinal and transverse grooves, which is rotatably mounted on an axle , a spring that has to be wound with the help of a key, similar to a key for pocket watches , and a powder pan, a tap with a fixed one and a movable jaw for clamping the igniter ( pebbles ) and a metal lid that covers the powder pan to protect the ignition charge against moisture and wind (see pictures on the right). , In contrast to for igniting the propellant charge flintlock weapons instead, flint pyrite ( pyrite used). The wheel spring is tensioned with the help of the key. A three-link chain is wrapped around the wheel shaft until a lever with an angled extension engages in a shallow cavity on the inside of the wheel and a lock slides under the rear end of this lever, so that the mechanism is blocked. A piece of pebbles is clamped in the faucet and ignition herb is placed on the pan. In the rest position, the tap is folded away from the pan lid. If you want to shoot, you swivel the tap onto the closed pan lid, whereby the V-shaped spring under the tap provides the necessary pressure to press the pebbles against the wheel when the pan is opened. When you pull the trigger , the lock is pushed away, the pull of the spring pushes the lever that kept the wheel under tension until now and turns the wheel back into its starting position. A cam on the wheel shaft pushes the lid of the powder pan under the pebbles forwards, and the front edge of the pebbles clamped into the tap erases in the middle of the ignition powder on the edge of the wheel, which protrudes from below through a recess into the bottom of the pan. The resulting sparks immediately set the ignition powder on fire. Fire enters the gun's powder chamber through the ignition hole, igniting the propellant charge . The gun is fired.

Although the wheellock was more reliable than the matchlock, it also had its drawbacks. The complex mechanism required great skill and effort to manufacture and was accordingly expensive. In addition, it had to be serviced frequently. You could load and cock the weapon in advance. However, this could not be done too long before the weapon was fired, as the spring could loosen again and the friction wheel could no longer turn. Pre-loading also posed the real risk that the weapon could accidentally ignite.

See also : Technique in the Renaissance

This invention has long been attributed to Leonardo da Vinci , who drew a wheel lock in the Codex Atlanticus , which was created between 1500 and 1505 . But wheel lock rifles were already in use in 1501. The Nuremberg patrician Martin Löffelholz von Kolberg made a drawing of a wheel lock in 1505.

The latest research results indicate that the first wheel lock pistols were built earlier in Goslar and Braunschweig. The city archives contain invoices from gunsmiths and master locksmiths for “fire locks” and “friction locks” from 1447.

The wheel lock was mainly used by the cavalry in the 16th and 17th centuries , the infantry preferred the matchlock , which was much cheaper and easier to maintain. Around 1700 the wheel lock was largely displaced by the stone lock .

Parallel to the use as an ignition lock on handguns, there were wheel locks that were used as lighter in the household (and are used if you look closely at the mechanics of the gas and petrol lighters with friction wheel that are still in use today ).

The main spring of these lighters was weaker, so that a simple wing nut, which was firmly connected to the wheel shaft, was sufficient for winding. There was no need for the pan lid because the lighters were on the table and couldn't fall over. At that time, a little tinder sponge soaked in saltpeter or dissolved gunpowder was usually used as ignition material .