The muzzle loader is the original form of the firearm . A rifled or smooth barrel is loaded with propellant and projectile through the muzzle . The rear end of the barrel is tightly closed and has only a small touch-hole through which a means of sliver ( Matchlock ), flint ( Steinschlosspistole ) Radschloss or primer ( percussion weapon generated) spark or fire jet ignites the propellant charge. Muzzle-loading firearms are classically loaded with black powder and a lead bullet . In addition, a gunshot plaster is often used for sealing. Muzzle-loading cannons used, among other things, stone or iron balls as well as fragmentary projectiles such as grapeshots .

Development of the muzzle-loading handguns

Already in the 15th century it was recognized that a rotating projectile flies more stable. So trains and fields were soon developed that ran helically and gave the projectile a rotation around its longitudinal axis ( twist ), which stabilized the projectile and significantly improved its accuracy. The range of the projectiles was also considerably increased by the twist.

Loading a muzzle loader with a rifled barrel is more difficult because the precisely fitting projectile required for this has to be pushed down the entire barrel from the muzzle. At first, round balls with greased gunshot plasters were used. The plasters act as a seal and, when the shot is fired, press themselves into the rifling of the barrel, transferring the twist to the projectile. However, since loading took a relatively long time and took a lot of attention, only hunters and snipers used rifled muzzle-loading weapons for a long time . In the military field, the smooth-barreled musket remained the first choice despite its inaccuracy due to its much higher rate of fire but with a much shorter range. At the same time, however, there was a search for ways to load rifled guns faster.

Henri Gustave Delvigne , a French officer, was the first to attempt to develop the rifled barrel rifle into a weapon suitable for use by all infantry. He realized that the bullet had to change its shape after it was introduced into the barrel and developed a smaller powder chamber on which the (round) bullet rested and was widened ellipsoidally with several powerful blows so that it followed the pulls. The deformed bullet changed the trajectory at the expense of accuracy, but showed promising properties.

Louis Étienne de Thouvenin took up the principle. He had the idea of expanding the under-caliber (i.e. minimally smaller than the barrel diameter) long bullet on a mandrel in the tail screw of the barrel with powerful thrusts with the ramrod so that it pressed into the rifles when fired. No more balls were used and the powder was around the mandrel. The system had the advantage that the rifles could easily be retrofitted simply by replacing the tail screw. But the system also had disadvantages: a lot of force had to be used to extend the bullet on the mandrel, and cleaning around the mandrel was difficult. The thorn was also prone to failure and could break. Nevertheless, this system worked impressively well, so that the French fighters were equipped with it in 1846.

Minié bullet with culot before / after launch

In 1849 Captain Claude-Étienne Minié solved the problem elegantly with the Minié bullet . The bullet was cylindrical with a conical or round tip and was slightly under-caliber so that it was easy to load. The floor of the projectile had a small hollow that contained a small iron cup ("culot"); This ensured that the bullet widened a little when fired and grabbed the rifles. This small change multiplied the possible combat distance and had a great influence on the conduct of the war (e.g. in the Crimean War in 1854 and in the American Civil War ), since the existing muskets only had to be equipped with trains and fields, which was comparatively fast. The breech - loading needle gun was already ready to replace the muzzle-loaders.

In 1852 the English gun manufacturer Henry Wilkinson and the Austrian artillery officer Hauptmann Lorenz invented, simultaneously but independently of each other, another method of using the force of ignition to enlarge the diameter of a loosely fitting long bullet so that it was firmly in the barrel and followed the trains . This method consisted of compressing the bullet lengthways instead of expanding it by igniting it. The compression bullet has a heavy point, is relatively long and has two to three deep grooves. The pressure of the burning powder compresses the length of the bullet, which in turn leads to an increase in diameter up to the barrel wall, whereby the bullet takes its puffs. 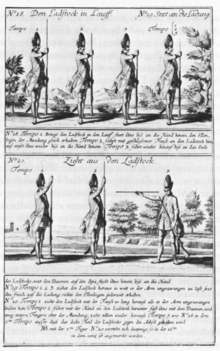 Handling the ramrod; Illustration from a service regulation of the 18th century: "Exercitium with the ramrod" from "Manuals or handles of the infantry" around 1735

The first muzzle-loaders were small cast bronze rifles . Stuck on the end of a kind of lance, the weapon was clamped under one arm, roughly aimed and ignited with a burning fuse clamped in a split stick. The Tannenberg rifle from 1399 is a good example of this. The next step in the development was the invention of an S-shaped iron rod, which led through the wooden rod of the shaft and at the end of which the fuse was clamped. This construction enabled a first, more precise aiming. Over time, the ignition hole moved to the right side of the weapon and was combined with a short cock that held the fuse and a trigger mechanism: the matchlock was born and a common shape until the beginning of the 17th century. In order not to need a burning fuse all the time, another variant of ignition was devised: the wheel lock . At the bottom of the pan was a friction wheel that ignited the powder with a pyrite pressed onto it from above . A conventional lighter (without piezo ignition ) works similarly and illustrates the principle. Wheellock front loaders were primarily used for the cavalry , the simple soldier kept the matchlock due to the high cost of the comparatively complicated mechanics. Around 1610 which was flintlock in Schnapphahn invented variant, and in the further development of the flintlock with combined battery and pan lids it prevailed until the early 19th century.

The first muzzle-loading cannons were stone rifles - two-part rifles that had a powder chamber and a flight . First the black powder (at that time still flour powder) was loaded and then dammed. Then the stone ball weighing up to 350 kg and more was used. This in turn was washed with flat wedges and clay verpisst and verschoppt  - the gaps between the uneven, rough-hewn stone sphere and the wall had sealed the flight and the ball will be fixed. The weapon was only ready to fire after the clay had dried. 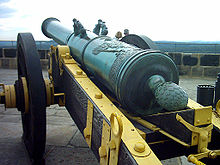 That was a good one shot a day . As a result, it was more and more from the heavier wrought iron bar ring guns to cast lighter Bronze - guns over. The fortress guns were mostly made of the cheaper cast iron, as they did not have to be moved often; However, field guns were made of bronze because of their lower weight for transport. The guns came in different sizes, and the shape that the muzzle-loading cannons would keep for three centuries more and more developed. The Kartaunen came into being . 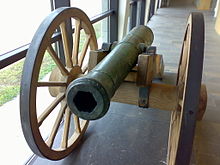 Later one went over to loading the guns with finished cartridges . For this purpose, a cartridge is pressed into the barrel with a ramrod , followed by a stopper, the bullet and another stopper. To prepare for ignition, the cartridge is pierced with a needle through the ignition hole at the top of the cannon. It is ignited via a powder trail or a fuse.

Shooting with muzzle-loading cannons was always very dangerous. Smoldering powder residue in the course could be at the necessary Swiping the pipe ignite after each shot. This was due to the freshly supplied oxygen. That cost many a gunner his arm. This was prevented by the fact that it was mandatory to wipe with a damp cloth after each shot and only then to set the new charge, whereby the gunner had to cover the ignition hole with a leather thumb protection.

At least three, mostly six (double occupation) or more people operated a heavy cannon in the Middle Ages. The gun leader was responsible for aligning the gun, the loading gunner for loading. The wiper cleaned them with water and a brush after each shot.

Even the cast cannons could not shoot long series. The pipes heated up so much that the charges threatened to burn off as soon as they were inserted; the number of shots that could be fired in an hour was limited. Over time, the material got better, so these limitations could be reduced. The pipes themselves did not undergo any significant development until the introduction of the breech loader, only the types of ignition changed. It was often a stone castle instead of the fuse inserted and the fuse. With the invention of the Minié bullet, rifled cannon barrels with improved accuracy also appeared. The long bullets were given small warts that followed the trains when they were loaded. When fired, the trajectory was correspondingly stable and the heavy projectiles also had a stronger effect on fortifications; In shipbuilding, this led to the development of steel armor for wooden ships and the rapid decline of sailing warships. 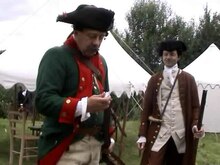 Nowadays, muzzle-loaders are primarily shot for sport or in traditional clubs. From a military point of view, the muzzle loader is technically completely obsolete, as the loading speed is too slow and, from a certain caliber size, the loading process can only be carried out with unreasonable effort (e.g. for ship guns with a caliber of 400 mm). Some weapons, such as mortars and the Russian GP-30 add-on grenade launchers, are still used by the military.

In terms of accuracy, black powder weapons are on a par with cartridge weapons with nitro propellants, even though they are usually fired at shorter distances due to the lower performance of black powder. However, muzzle-loader disciplines are still shot in England at a distance of 900 yards, that is 822.96 meters. The BDS shoots the 400m and 600m disciplines in Ulfborg, Denmark with muzzle-loaders and black powder cartridge ammunition.

A particular difficulty when shooting the muzzle-loader with flintlock ignition is the uncertainty of sufficient spark formation, which can lead to ignition delays and even failure. Of course, this has a significant effect on the precision of the shot.

It is precisely these peculiarities that make the muzzle loader so attractive as a sporting weapon. In Germany, this form of shooting sport and variant of the cultivation of customs (e.g. also gun shooting ) is represented by the black powder initiative, for example . There are disciplines for muzzle-loading weapons, especially in the large associations such as DSB and BDS . The DSB (Deutscher Schützenbund) is a member of the MLAIC (Muzzle Loaders Associations International Committee) and sends its national muzzle loader team to the European and World Championships that have been taking place for many years.