This article describes the projectile in weapons; for the physical term projectile see z. B. Nuclear Reaction .

A projectile , also known colloquially as a bullet , is a projectile fired from a firearm .

The term projectile is a derivative of the French "projectile" and is mainly used for projectiles from handguns .

The terms projectile and projectile are used almost synonymously in the literature on weapons technology, whereby projectile is understood as a sub-term of projectile. The general principles described in the article bullet apply to projectiles: 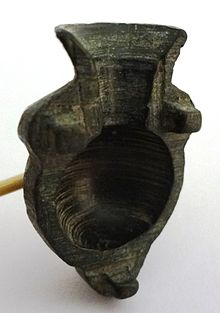 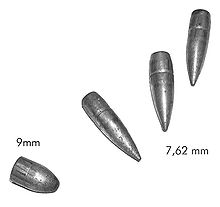 In the early days of firearms, stone bullets were used first , then iron and lead . Today's projectiles are made of steel , lead, copper and can contain depleted uranium or tungsten . Other projectiles do not derive their effectiveness from the kinetic energy, but from their explosive filling. An example of this are rifle grenades (projectiles filled with explosives).

At first, projectiles were fired in a spherical shape (e.g. the classic cannonball ), which is why projectiles are colloquially referred to as bullets to this day.

A modern projectile is usually designed as a long projectile, i.e. has a cylindrical shape with a mostly pointed front part and a slightly tapering end. It is given a twist in the course to stabilize it in flight.

Depending on the shape of the tip, the projectile is as sharp , semi-pointed or round called, also still exist some special types: hollow-point bullet have a concave top, which on impact to a greater deformation (mushrooming) and thus stronger effect on the target leads. For this reason, they are often confused or equated with semi-jacketed bullets . Flat head bullets are bullets with a flattened head. They are particularly needed for weapons with tubular magazines to prevent the tip of a cartridge from exerting excessive pressure on the primer of the cartridge in front of it and thus igniting the cartridges in the magazine.

Today there are bullets with almost every possible combination of bullet shape and shell construction.

Full floors are floors made of a homogeneous material d. that is, they are jacketed bullets. The most common form of full bullets are simple lead bullets, such as those found in the sporting field ( diabolos for air guns ; lead bullets for small-caliber ammunition ), but also as shotgun barrel projectiles for shotguns.

There are also lead-free full bullets , mainly for hunting . These consist of copper or copper / zinc - alloys (. Eg brass or tombak ). They are manufactured either using automatic lathes or presses .

A special feature are full steel floors, which do not show any deformation in the active medium and release all of their energy via deep penetration. There are also so-called "frangible" ammunition, the projectile of which consists of a metal powder pressed under very high pressure without the addition of lead, which was specially developed for indoor stands.

Full jacketed bullets consist of a deformable jacket, usually made of tombac , and a core usually made of lead. The deformable jacket should be able to adapt to the swirling lines and fields in the pipe and keep its wear as low as possible. The core in turn forms the weight-giving mass. The effect in the target is generated by the destructive force of this very mass, which hits the target at the highest possible speed. It should damage or partially destroy the target by impact or entry and the associated energy release.

According to the Hague Land Warfare Regulations, military projectiles (army ammunition) are always full-jacketed projectiles, sometimes with a core made of uranium ( uranium ammunition ) or tungsten in order to increase the penetration power on armored material.

The semi-jacketed bullets make up the largest share of the bullets on the market. Most hunting bullets are partial jacketed bullets z. B. RWS cone point (KS), double core (DK) or Norma PPC Oryx or plastic point, as the shell, which is open at the front, ensures that the bullet breaks down when it penetrates the game. This transfers the projectile energy to the target and enlarges the wound canal. The probability that the game will be fatally hit increases. Full jacketed bullets, on the other hand, have a higher penetration rate and leave a smooth wound canal. This higher penetration rate is mostly used in the military sector. Partial jacketed bullets are forbidden in the military sector according to Article 23 of the Hague Land Warfare Regulations, “Prohibition of weapons and projectiles that cause unnecessary suffering”. 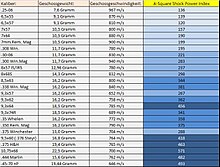 The diameter of the barrel, measured from field to field, is called the caliber . It should be noted that smaller calibers have established themselves in the field of military handguns. On the one hand, this enables a larger supply of ammunition to be carried, and on the other hand, the lower recoil improves the controllability of the weapon during bursts of fire . Due to the greater speed, smaller calibers have a higher penetration power than larger calibers (with the same projectile energy but smaller diameter, higher energy density J / mm²; see MP5 and MP7 ). But since a smaller caliber is accompanied by a smaller propellant charge, it is lower; see 7.62 × 51 mm NATO in relation to 5.56 × 45 mm NATO . The lower weight of the bullet also makes the bullet prone to deflection by slight obstacles in the bullet's trajectory such as grass or thin branches. Today's military standard rifle cartridge from NATO has a projectile with a diameter of 5.56 mm ( .223 Remington ). From a standard M16 rifle , the projectile of the above 5.56 × 45 mm cartridge reaches a muzzle velocity (v 0 ) of approx. 990 meters per second, which is reflected in the short and medium distances due to the faster (flatter) trajectory of the projectiles has a positive effect on hit performance.

The behavior of projectiles is described by ballistics . The energy of a bullet immediately after leaving the barrel ( muzzle energy ) is calculated using the formula for kinetic energy :

The energy is given in joules , the mass of the projectile in kilograms and the muzzle velocity of the projectile in m / s . Due to the energy loss during the flight, the calculated energy value does not provide any information about the projectile effect at a certain distance, about its possible man-stopping effect or its effectiveness against armored or unarmored targets.

The muzzle velocity and the muzzle energy depend on many factors, such as the barrel length of the firearm , the type and weight of the bullet, the amount and type of powder charge ( load ) of the respective cartridge, and much more. Depending on the desired properties of the ammunition, there are also different loads for a single cartridge type possible, which also results in different muzzle velocities and energies when firing from the same weapon. Here is a short list of the performance data of some cartridges that can be achieved with common factory loads: