The title of this article is ambiguous. Further meanings are listed under stone (disambiguation) . 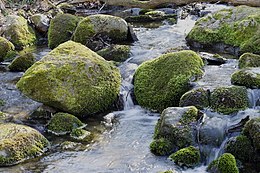 A stone describes a compact object made of mineral or rock . Alemannic dialects and Bavarian dialects still use “stone” in old place and field names.

That is common. French MHG. , Ahd. Stone based as the slaw. Clan of carbon black. Stena "wall, a wall" in an educational to the IE. Root stāi- , STI "[is] densify clotting".

In contrast to rocks , stones no longer have a firm connection to the rock unit to which they originally belonged, regardless of whether they are still in their original location (grown, adjacent rock) or not (dislocated).

Special forms of stones are:

Rock is not only found on Earth , but also on the Moon , the three terrestrial planets and most asteroids . Stones have already been brought to earth from the moon ( moon rocks ). Other non-terrestrial rocks can be found as meteorites . In the solar system they also form the particles of the planetary rings . In the broadest sense, all celestial bodies that do not have any tectonics of their own are stones (including the moon, but not the earth with its hot, highly active core or the gas planets ).

A basic distinction is made in construction:

According to the size ( grading curve ) a distinction is made between:

A distinction is made according to use:

Aggregate is the charge for concrete or asphalt with various grain sizes of gravel is for the subsequent rolling in asphalt.

There are also a number of specialist names for special formats for various purposes.

Marker stone on the Rax , Austria 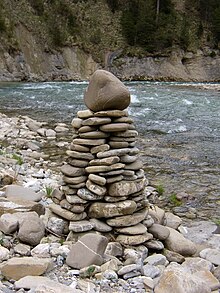