This article deals with the material clay. For the actor see Ralf Lehm . 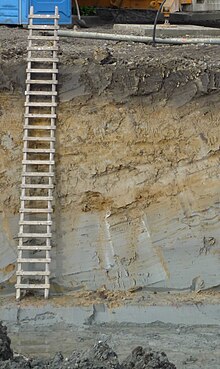 Layer of clay in a deep excavation ( Rheda-Wiedenbrück )

Loam (from Middle High German glue , like “ Leim ”, from Middle High German līm , belonging to an Indo-European root lei- , “slimy, slippery soil, brush over something”) is a mixture of sand ( grain size > 63  µm ), silt (grain size > 2 µm) and clay (grain size <2 µm). It arises either through weathering from solid or loose rock or through the unsorted deposition of the mentioned components. Depending on the origin , a distinction is made between mountain loam , hanging loam ,Boulder clay ( glacier ), loess clay ( loess ) and alluvial clay (from river deposits). Loam is widespread and readily available; it is one of the oldest building materials (burned or unfired).

The mixing proportions of sand, silt and clay can fluctuate within defined limits, and even coarser material (gravel and stones) can be contained in small amounts. Loam with a significant amount of lime , for example as a result of less advanced weathering or when it is formed through deposits of calcareous material, is known as marl . Loam with a low lime content is also called Latvian . Clayey clay is called fat (not in the sense of fatty ), clayey clay is lean .

Loam is not as plastic and impermeable to water as pure clay because the grain size of the constituents sand and silt is larger. When wet, clay is malleable, when dry it is solid. When water is added, the clay swells ; when it dries , it shrinks or shrinks , which is particularly important in building with clay . As a building material, clay stores heat and has a regulating effect on air humidity as well as on the humidity of adjacent materials.

Natural clay accumulations in Central Europe are mostly ice-age deposits from fine material from the steppentundra blown by the wind . This dust (loess and sand) resulted from glacier grinding , was transported by rivers and blown away as a result of seasonal drying .

Due to the high proportion of weatherable minerals, which is also accompanied by a good storage capacity for nutrients and water, loam generally results in fertile soils .

Clay as a building material

Dogon ( Mali ) granaries made of clay

The Great Mosque of Djenné in Mali 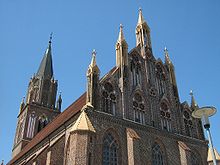 St. Marien in Neubrandenburg , an example of the brick Gothic . The raw material for brick is clay, which is shaped and solidified in a combustion process.

Clay is the oldest binding agent used in construction , next to wood the oldest building material ( rammed earth ) of man and belongs to the most important mineral building materials with lime - and since the beginning of the 20th century cement . In brickworks , the building material extracted from clay pits is brought into different brick shapes and burned to increase strength.

Loam is also used unburned: Loam building techniques have been known for more than 9000 years, and around a third of the world's population still lives in mud houses today . Large buildings were built from mud and adobe bricks , such as the Great Mosque of Djenné in Mali or the ziggurat of Tschoga Zanbil in present-day Iran .

In most of the buildings that were erected in lime-poor regions of Germany before 1950, clay is found, for example in the compartments of half-timbered houses (at least in the interior walls ), as clay plaster and in some cases in the ceilings .

Clay screed is used in cellars, barns and barns. Because of its moisture-regulating properties, it is still used today in cellars to store fruit and vegetables.

In some villages there are still old clay pits from which the clay was extracted in the past. Too fat loam (with a high proportion of clay) is thinned with sharp sand. Various simple test methods provide information about whether the clay has a suitable consistency:

Since the beginning of the 1980s , clay has been rediscovered as an environmentally friendly and healthy building material as well as a design medium ( clay plaster , clay paints) mainly used in interior areas .

Since clay only hardens physically (and does not set chemically like most other building materials ), it is mostly used outdoors in northern and central Europe , protected from the weather . The straw walls are an exception . This means plastering made of clay with short-cut, overlapping integrated straw , which was also attached to the half-timbered walls facing the weather side of houses, barns and stables as weather protection.

Loam can be used for the construction of loam stoves or for plastering floor and wall heating , as loam, like most heavy building materials, has good heat storage properties and can be used on hot components. In energetically efficient buildings that should meet building biological requirements, wall heating under clay plaster in combination with solar thermal energy is used.

In April 2012, Spiegel Online published an article according to which the short-lived radioactive noble gas radon was measured in a half-timbered house in Franconia, which was partly made of clay , causing the normal annual radiation exposure (in Germany an average of 2.1 milliSieverts) in this house to be 1.6 milliSieverts was exceeded. The Federal Office for Radiation Protection , on the other hand, stated after a series of tests on building materials that "... in Germany there were no materials that could be used for building purposes that could lead to higher concentrations of radon-220 (thoron) in rooms due to increased thorium concentrations." The half-timbered house is in Franconia in an area where radon rises from the underground. If the basement floor is not sealed by a diffusion-proof barrier layer, the gas can get inside the house.

In the foundry industry , clay is used as a basic molding material for the production of casting molds . With the development of the iron foundry around 1300, molding in clay was one of the first molding processes. The clay molding technology using complete model equipment has largely been replaced by molding using template models and is still used in the bell foundry . Certain mold additives are important in this molding process, which alleviate the negative effects of drying the mold and later create opportunities for the discharge of the casting gases while the metal is being poured into the mold.

Racing ovens are also traditionally built from a mixture of clay and straw .

Loam as a biotope

In the animal kingdom , for example, the clay wasps build their nests mainly with or in clay. The loamy banks of streams or rivers prefer some bird species as a building site for their breeding burrows , such as the sand martin . Numerous insects , as well as some species of spiders , build their caves in clay, as do some snails .

Due to its water-retaining properties, loam is the subsurface of many wetland habitats , such as those found in numerous floodplains . The existence of a number of moors is linked to the occurrence of clayey loam, for example in the High Fens .

Clay in the terrarium

In addition to the natural optical properties, like in earth building, clay has a positive effect on the room climate. Clay regulates the humidity to a value of 20 to 30%, which is suitable for dry terrariums.

Locations for clay were partly eponymous, for example in the Munich area for the places Berg am Laim and Laim , all up the slope along the Isar , where ice-age winds deposited the loess dust of the Isar plain. In Günterstal there is a Leimeweg, in neighboring Horben the Gewann Leimgrube or Leimiweg.