Radon [⁠ ʁaːdɔn ⁠] , also: [⁠ ʁadoːn ⁠] (such as radium because of its radioactivity of Latin radius "beam") is a radioactive chemical element with the element symbol Rn and atomic number  86. In the periodic table , it is in of the 8th  main group or the 18th  IUPAC group and is therefore one of the noble gases (hence the ending -on as an analogy).

All isotopes of radon are radioactive. The most stable - and at the same time naturally occurring - isotope is 222 Rn with a half-life of 3.8 days; it arises as a decay product from the radium isotope 226 Ra. Two other natural isotopes, 219 Rn and 220 Rn, are sometimes referred to by their historical trivial names actinon (An) and thoron (Tn), respectively. The fourth natural isotope 218 Rn does not play a quantitative role in comparison to the three aforementioned.

Since radon can accumulate in houses (in contrast to the natural environment) in poorly ventilated rooms, it represents a health hazard and considerable radon pollution. Ultimately, the main source of danger is not radon itself, but its decay products, with polonium isotopes contribute most to exposure to alpha radiation. Radon has by far the largest share of the total amount of radiation on the earth's surface (average effective dose per person in Germany: about 1.1  mSv / year), followed by direct terrestrial radiation with about 0.4 mSv / year, the direct cosmic radiation Radiation and the radioactive substances naturally occurring in food, each with around 0.3 mSv / year.

With his publication from 1899, Ernest Rutherford is considered the discoverer of radon. Friedrich Ernst Dorn , who is also often credited with the discovery, quotes Rutherford's results in his work from 1900.

In 1909, William Ramsay and Robert Whytlaw-Gray isolated a sufficient amount of the gas to determine its melting point and density . The radioactive gas was initially called radium emanation (" emanating from radium"). Because it gave off light in the dark, it was also called niton in literature , after the Latin word nitens "shining".

In 1923 the terms radium emanation and niton were replaced by the term radon .

On average there is one radon atom in the earth's atmosphere for every 10 21 molecules in the air . The sources of radon are traces of uranium and thorium in the rock and in the soil , which slowly decay. Radon is formed in their decay series . This then diffuses from the uppermost soil layers into the atmosphere, into the groundwater , into cellars, pipelines, caves and mines. Radon from deeper layers of the earth does not reach the surface, as it decays on the way there.

For this reason, radon occurs more frequently in areas with high levels of uranium and thorium in the soil. These are mainly the low mountain ranges made of granite rock , in Germany especially the Black Forest , the Bavarian Forest , the Fichtel Mountains and the Ore Mountains , in Austria the granite mountains in the Waldviertel and Mühlviertel . Acid and light-colored ( leucocrate ) rocks are mainly found here . Overall, radon occurs in significantly higher concentrations in southern Germany than in northern Germany. In Switzerland, the canton of Ticino in particular is a pronounced radon region; in Belgium it is the eastern and south-eastern part. (see Limburg coal district )

Some springs have a significant proportion of radon, for example Bad Gastein , Bad Kreuznach , Bad Schlema , Bad Steben , Bad Zell , Ischia in the Gulf of Naples, Menzenschwand , Meran , Sibyllenbad and Umhausen in the Ötztal . With the Wettin spring, Bad Brambach has the most powerful radon spring in the world used for drinking cures.

Other places where radon occurs in relatively high concentrations are, in addition to uranium ore, fluorspar or lead mines and heaps and sedimentation basins of uranium mining, laboratories and factories in which uranium, radium or thorium are handled.

Like all noble gases , radon is almost non-reactive chemically; it reacts with fluorine to form radon difluoride , whether compounds with oxygen have been observed is a matter of dispute . Under normal conditions , radon gas is colorless, odorless, tasteless; on cooling below its melting point, it turns bright yellow to orange. When filled in gas discharge tubes , radon generates red light. In addition, at 9.73 kg · m −3, it is by far the densest elementary gas, if one disregards the exotic and rare astatine and hot diatomic iodine vapor.

Like its lighter group-homologous xenon , radon is able to form real compounds. It can be expected that these are more stable and diverse than with xenon. The study of radon chemistry is hindered by the high specific activity of radon, because the high-energy radiation leads to self-decomposition (autoradiolysis) of the compounds. A chemistry with weighable amounts of these substances is therefore not possible. Ab initio and Dirac-Hartree-Fock calculations describe some properties of the not yet synthesized radon hexafluoride (RnF 6 ).

As a radioactive gas with a very high density, radon can accumulate in buildings, especially in basements and the lower floors, in physiologically significant amounts. In more recent measurements, if building materials such as unfired clay were used in buildings, larger amounts of radon were also found on the upper floors. 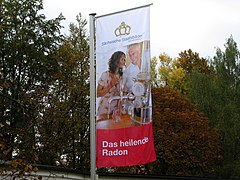 The healing radon , advertisement of the Saxon state baths in Bad Elster . With the Wettin spring, Bad Brambach has a water spring with a particularly high radon content worldwide.

In medical radon balneology , radon is said to stimulate the human immune system and thereby alleviate diseases. From a scientific point of view, no positive effects of radon can be proven. Radon enters the human organism through the inhalation of highly active radon-containing air or in baths through the skin. In terms of radiation protection, the additional radiation exposure from radon is low, but not negligible. The Federal Environment Agency sees contraindications for radon balneology for use in children, adolescents and pregnant women.

In hydrology , the radon content of a body of water can provide information about its groundwater supply. Rainwater contains almost no radon, and surface water is also almost radon-free, since radon is quickly released into the atmosphere from there. Groundwater, on the other hand, has radon concentrations that are orders of magnitude higher than those of surface water. Therefore, a high level of radon in surface water is an indicator of the influence of groundwater.

In several countries the earthquake forecast is also based on radon measurements . Slight vibrations in the ground ensure that the radon gas produced in the ground spreads faster than under normal conditions. As a result, the radon concentration rises measurably in underground cavities.

Radon measurements help in the search for uranium ore deposits . The size of the radon exhalation , i.e. the amount of radon gas escaping from the soil, depends on the radium content and the porosity of the subsoil. During uranium prospection, simple, passively working radon measuring devices are laid out on the earth's surface or just below it in large areas. Above-average measured values ​​indicate higher uranium / radium concentrations and soil porosity and thus a possible deposit. There are geological processes that separate uranium and the radium produced from it. Therefore the reference to uranium is ambiguous.

There are 34 known isotopes and 4 nuclear isomers of radon, all of which are radioactive. The heaviest radon isotope to date 229 was obtained in 2008 in the CERN isotope laboratory ISOLDE by bombarding uranium nuclei with high-energy protons. Its half-life is 12 seconds.

In the three natural chains of decay only the four isotopes 222 Rn, 220 Rn, 219 Rn and 218 Rn occur, which are all alpha emitters. In addition, the alpha emitter 217 Rn is created in the now artificial neptunium series .

If the radioactive substances mentioned above break down to form radon, it can outgas. Radon escaping from a sample can be captured in a laboratory and separated from the remaining air by liquefying it. When one gram of radium 226 Ra decays , 0.64 cm³ of radon 222 Rn is produced per month.

Classifications according to the CLP regulation are not available because they only include chemical hazards that do not occur with noble gases. The dangers based on radioactivity are important .

According to studies by the World Health Organization , the incidence of lung cancer from radon in indoor air increases linearly, the long-term limit recommended by the WHO is 100  Bq per cubic meter of indoor air. The probability of lung cancer increases approximately with an increase of 100 Bq / m³ in the room air by 10%.

In 2018, radon measurements were carried out in 3,400 residential properties in the federal state of Salzburg in Austria and it was determined that a limit of 300 Bq per cubic meter of air was exceeded in 10% of the apartments.