The title of this article is ambiguous. The mathematical symbol ∈ is under element symbol . 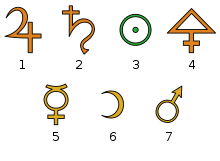 Table of alchemical symbols ( The last Will and Testament by Basil Valentine, 1670)

Element symbols are used as a shorthand for individual atoms of a chemical element and consist of one or two letters. These element symbols are international (see IUPAC ) and are also used in countries that use letters other than Latin (Greek, Cyrillic, Arabic, ...).

The symbols are derived from the Latin or Greek names, with the newer also from the English names of the elements. If the symbol of an element consists of two letters, the first letter is capitalized and the other is capitalized. For elements that have not yet been finally named, the name is derived from the digits of the ordinal number of the element, using Latin or Greek numerals. For example, the element with the ordinal number 119 is listed as Ununennium with the symbol Uue (see: Systematic element names ).

Element symbols in chemical formulas represent not only the type of element, but also a certain amount of it, namely a single atom or a uniform multiple of it; usually 6.022 · 10 23 atoms (see Avogadro 's number), because this is the amount in grams corresponding to the atomic mass (previously: atomic weight) of the element . In contrast to individual atoms, these are quantities that can be weighed and handled in chemical experiments and that everyone can imagine something under.

For more than a millennium, the philosophers believed that the earth consisted of four elements: dry and warm fire, warm and humid air, humid and cold water, and cold and dry earth (for details see the four-element theory ). That closed the circle for them. To make sure they were talking about the same element, they gave them symbols. For many centuries after that, there was no discussion of this notion.

It was not until the early Middle Ages that the alchemists , who were mainly concerned with the production of gold from base materials, developed a kind of secret language and script that they could only read . In order to record their test results, they used symbols for basic substances in order to be able to create short notes. Every alchemist developed his own formula language, there were only a few generally applicable symbols. In their works there was always a page with the corresponding explanation of the chemical symbols .

In 1787 Jean-Henri Hassenfratz worked with Pierre-Auguste Adet to develop a system of chemical sign language which, among other things, clarifies the physical state of a substance. They used signs such as , , , or Latin capital letters like , . In the latter signs the way for Jöns Jakob Berzelius and his chemical sign system was laid, so to speak.

At the beginning of the 19th century - with the development of the atomic hypothesis - John Dalton simplified this system by distinguishing for the first time between elements and compounds . For each element known at the time, he introduced a specific circle symbol, and he described the connections by stringing together the corresponding element symbols.

In 1814, Jöns Jakob Berzelius introduced the symbolism used today. He replaced the symbols defined by Dalton with the first letters of the Latin element names. However, some of the elements already known had the same initial letter. These elements were therefore given two letters as "abbreviations". He further simplified the spelling of Dalton by not describing the number of individual atoms in the molecule by a single character or symbol, but by introducing the index . For example, COO became the now known notation CO 2 .

(only symbols that differ from the German element name)