This article deals with the chemical element bismuth, for the French mathematician of the same name see Jean-Michel Bismut .

Bismuth or bismuth (also outdated: bismuth) is a chemical element with the element symbol Bi and the atomic number 83. In the periodic table it is in the 5th main group or nitrogen group .

There is no known stable isotope . The extremely low radioactivity of the naturally occurring 209 Bi due to the extremely long half-life is, however, irrelevant for practical use. The radioactivity could only be detected in 2003, since the highly sensitive methods required for measurement were not available before; In the 1990s, 209 Bi was still considered the heaviest stable nuclide .

Bismuth was identified as a separate element after the middle of the 18th century by chemists Claude François Geoffroy , Johann Heinrich Pott , Carl Wilhelm Scheele and Torbern Olof Bergman . Previously it was often thought of as a variety of lead , tin , antimony and other metals or minerals. In the publication Einwohl Bergbüchlin (approx. 1527) the ore of bismuth ( wißmad ärcz ) is mentioned as a companion to silver ore. Later in the 16th century Georgius Agricola attempted a more precise distinction.

The name of the metal, which appears in German in 1390 as wesemut and in Latin 1450 as bismutum , 1530 as bisemutum , can be traced back to the form b [i] sīmūtīyūn , which is probably one in an Arabic translation of Dioscurides from the 9th century transliteration of ancient Greek ψιμύθιον psimýthion , white lead representing '. The origin from Arabic iṯmid 'antimony' was also assumed; Often reference is also made to the alleged first suspicion in the St. Georgen colliery in the Wiesen near Schneeberg in the Ore Mountains in the 15th century, or to the variant wis (se) mat. the 'white mass' should mean.

The chemical symbol Bi was proposed by JJ Berzelius in 1814. 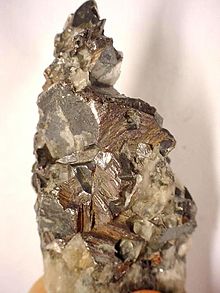 Bismuth occurs naturally, i.e. in elemental form, and is recognized as a mineral by the International Mineralogical Association (IMA) . The 9th edition of the systematics of minerals according to Karl Hugo Strunz used by the IMA lists bismuth together with antimony , arsenic and stibarsen in the subdivision of arsenic group elements under system no. 1.CA.05 (outdated 8th edition : I / B.01-40 ). In the systematics of minerals according to Dana , which is mainly used in the English-speaking world , bismuth belongs to the " arsenic group " with system no. 01.03.01 .

Solid bismuth forms in hydrothermal - transitions from pegmatites and topaz-containing tin-tungsten-quartz veins and usually together with various copper, nickel, silver and tin ores . Bismuth rarely develops well-developed crystal forms, but these can reach a size of up to 12 centimeters. It is usually found in the form of dendritic, lamellar or granular aggregates , but also as polysynthetic twins with parallel stripes ("feather bismuth") or funnel-shaped side surfaces drawn into the crystal center.

So far (as of 2011) around 1400 sites for native bismuth are known. The sites are mainly in Australia , Bolivia , China , Canada , Mexico , Peru and Spain , historically in Bieber in the Spessart and in the Ore Mountains , where bismuth both in pure form and as sulphide ( bismuthhinite ), selenide (selenide bismuth luster) and oxide ( Bismit ) is found. In addition, bismuth, like antimony and arsenic, occasionally occurs as a double sulfide: galenobismutite (PbBi 2 S 4 ), lillianite (Pb 3 Bi 2 S 6 ), silver bismuth luster (AgBiS 2 ), copper bismuth luster (CuBiS 2 ) and copper bismuth diaphragm (Cu 6 Bi 2 S 6 ). A tellurium sulfide in the form of tellurium bismuth (Bi 2 Te 2 S) and a silicate called eulytin (Bi 4 (SiO 4 ) 3 ) are also known.

A total of around 230 bismuth minerals are known , including native bismuth .

To obtain bismuth, one can start from oxidic or sulfidic ores.

Oxidic ores are reduced to bismuth in a furnace using coal :

Sulphidic bismuth ores can either be reduced with iron using the precipitation method:

Or the sulphidic ores are first converted into oxides and then reduced with coal ( roasting reduction process ):

The raw bismuth is then freed from other elements ( antimony , arsenic , lead , iron and sulfur ) by oxidizing melting . Copper is eliminated by melting it with sodium sulfide , gold and silver by extracting the molten bismuth with tin .

Bismuth has the strongest Hall effect of all metal-like elements and, as a semi-metal in its pure form, has poor electrical conductivity . Apart from superconductors and pyrolytic graphite, it also shows the strongest diamagnetic property; it is pushed out by an externally applied magnetic field . The Schubnikow-de-Haas effect (oscillations of the electrical resistance in an external magnetic field) was observed and measured for the first time in bismuth crystals. Before the development of Hall sensors and field plates , the so-called bismuth spiral , a coil with thin, insulated bismuth wire , was used to measure magnetic fields . The change in resistance of the coil under the influence of a changing magnetic field was certainly very small compared to today's sensors.

In pure bismuth single crystals, superconductivity was observed at temperatures below the extremely low transition temperature of 0.53 mK. Bismuth is thus the superconducting material with the lowest charge carrier density. 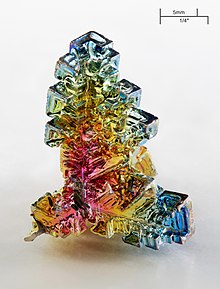 Two modifications are known of bismuth: Bismuth, which is common at room temperature, forms a body-centered cubic crystal structure under high pressures (from 9 GPa ).

Liquid bismuth is one of the few substances that expands when it solidifies ( density anomaly ). This phenomenon can also be observed with gallium , germanium , plutonium , silicon , tellurium and water . With bismuth, it is based on the fact that a double phase transition takes place during melting (and solidification) : firstly, the first-order phase transition from solid to liquid (usually with a small decrease in density) and additionally a first-order phase transition from semi-metal to metal with a considerable increase in density This explains the unusually large entropy of melt of 21.1 J / (K · mol) and the sudden increase in electrical conductivity of the bismuth melt.

Bismuth is stable in dry air at normal temperatures. In moist air, however, an oxide layer forms on the surface. Furthermore, bismuth is resistant to water and non-oxidizing acids ( hydrochloric acid and dilute sulfuric acid ). In oxidizing acids ( nitric acid or hot concentrated sulfuric acid) bismuth is dissolved to form bismuth salts (BiX 3 ). In powder form, it is a flammable solid, can be easily ignited by brief exposure to an ignition source and continues to burn after its removal. The more finely the substance is distributed, the greater the risk of ignition. The metal in compact form is not flammable.

When exposed to heat, bismuth combines directly with the halogens as well as with sulfur , selenium and tellurium . Bismuth does not react with nitrogen and phosphorus .

Natural bismuth consists only of the isotope 209 Bi. In 2003, the Institut d'astrophysique spatiale in Orsay ( France ) found that this isotope, which was previously considered stable, is an alpha emitter with a half-life of (1.9 ± 0, 2) · 10 is 19 years old (about 19 trillion years). The very slow decay of 209 Bi into 205 Tl is due on the one hand to the close proximity to the doubly magical 208 Pb in the isotope scheme and the fact that 209 Bi itself is simply magical. The long half-life results in an activity of 0.0033 Bq / kg (corresponding to a single core disintegration per five minutes and kilogram).

209 Bi is the penultimate member of the Neptunium series and, apart from 205 Tl, the only one that still occurs naturally. Because the nuclides at the beginning of the neptunium series are also incubated in nuclear reactors today, the 209 Bi amount on earth increases over time.

The alloy bismanol with manganese is a strong permanent magnet .

In coating alloys (hot dip tinning) for solar connectors, it serves as a substitute for lead.

Synthetic bismuth single crystals with dimensions of more than 20 centimeters and polycrystalline bismuth plates are used as neutron filters for material investigations in research reactors.

Bismuth is touted by some sources as an alloying element in free-cutting steels as a substitute for lead. It is intended to improve the machinability of these steels without the negative ecological properties of lead. From the point of view of steel metallurgy , however, this is unfavorable, since bismuth can practically not be removed metallurgically and then appears as an undesirable accompanying element in the steels produced from scrap. In the electronics industry, a bismuth-tin alloy is used as a replacement (keyword RoHS ) for lead-containing solders. The disadvantage is that separate soldering devices are required for bismuth tin. Contamination with lead (e.g. repair of old devices) leads to a very low melting point, whereas the use of tools for tin-silver alloys leads to high temperatures and contamination of the tool with bismuth.

Bismuth oxide is used for the production of optical glasses and as a sintering aid in technical ceramics. It is also used in the form of bismuth germanate as a scintillation detector in positron emission tomography (PET).

A lead-bismuth alloy was used as a coolant for nuclear reactors in the Soviet Union . Although this alloy is more effective than conventional pressurized water cooling, it is also correspondingly more difficult to handle. The alloy solidifies at a temperature below 125 ° C and can then cause major reactor damage. Such reactors were used, among other things, on nuclear submarines (e.g. submarines of the Alfa class ).

Bismuth is also used as a non-toxic substitute for lead in shotgun ammunition for firearms, as bismuth has a similar mass to steel and copper shot, but is just as soft. This makes it suitable for older shotguns without steel shot. However, this is not very common.

In the 16th century, a painting technique was developed in southern Germany and Switzerland in which bismuth was used as a coating for smaller decorative boxes or boxes, and sometimes also for wooden altars. This technique is known as bismuth painting .

Use in the chemical industry

Bismuth chloride oxide (BiOCl) is used as a silver-white pearlescent pigment in cosmetics .

Bismuth vanadate is known as a highly weather-stable greenish yellow - pigment z in use and place. B. in high-quality paints , emulsion paints for facade use, plastics and printing inks use.

Bismuth is also used as a catalyst in the chemical industry.

Bismuth compounds such as dibismuth tris (tetraoxodialuminate) , bismuth oxide nitrate (bismuth subnitrate , basic bismuth nitrate) and bismuth citrate potassium are used as part of antibiotic therapy against the pathogen Helicobacter pylori , which can cause ulcers in the stomach and duodenum ( eradication therapy ). It is used as a so-called quadruple therapy (combination therapy consisting of a proton pump inhibitor and a bismuth triple therapy [bismuth salt, tetracycline , metronidazole ]).

Bismuth compounds are also sometimes used as astringents for diarrhea and as odor-reducing agents for bad breath and flatulence . In addition, some compounds (e.g. Bibrocathol ) are used as an antiseptic .

In addition, bismuth is used diagnostically in positron emission tomography in the form of bismuth germanate as the detector material of the tomography device.

Historically, at the end of the 19th century, bismuth was used as a component of wound powders (e.g. dermatol ). It has been used as a remedy for syphilis since the 1920s . However, it has been completely replaced by modern antibiotics.

Bismuth gallate is used in a Stolte skin ointment formulation ; the ointment can be used to treat inflammatory areas of the skin in infants.

Bismuth poisoning ( bismuthism ) is rare due to poor absorption in the gastrointestinal tract. It is largely similar to mercury poisoning . Typical are the appearance of a slate-gray to black bismuth border (bismuth sulfide deposit) on the oral mucosa with the formation of an inflammation of the oral mucosa ( stomatitis ) and gingivitis (with tooth loosening or loss), intestinal inflammation ( enteritis ) with diarrhea and kidney damage (bismuth nephropathy). 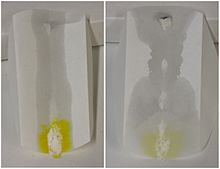 The bismuth slide. Left a positive control with bismuth (III) chloride , right an analytical substance. In the right picture, the individual piles of salt used to mask faults can still be seen.

If Bi 3+ is present, a crystalline, lemon-yellow thiourea complex is formed in which three thiourea molecules are associated with bismuth via the sulfur: 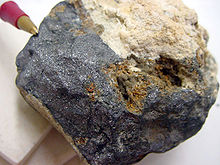 Bismuth is primarily trivalent, but there are also mono- and pentavalent bismuth; However, bismuth (V) oxide is a very strong oxidizing agent that even oxidizes manganese (II) to permanganate. It also forms polymeric cations . It is stable in the air .