The title of this article is ambiguous. Further meanings are listed under yellow (disambiguation) .

Yellow is the color that is perceived when light strikes the eye with a spectral distribution in which wavelengths between 565 and 575 nm dominate. Light with this property can also be remitted as body color .

Yellow is often identified as Y (en: yellow ), since G stands for green (see RGB). In electrical engineering, the color is abbreviated as ge . 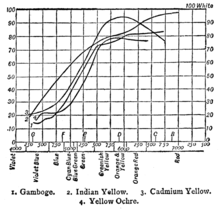 Reflection spectra as a percentage of reference white for selected yellow pigments, according to Abney, 1891

sRGB - Gamut on the CIE diagram (1931), which approximates the actual colors of the pixels on a conventional monitor : some shades of yellow are outside the representable range

Mixing yellow with red results in orange tones , mixtures with green even with small amounts of fresh green tones ( spring green ). If you lower the saturation of yellow, you get a neutral (yellow) brown , even with small changes. Yellow coloring agents react sensitively to (colored) contamination. Mixtures in white are called light yellow or pastel yellow , from a proportion of half in white there are natural colors and off-white (beige).

On the screen is color-strong yellow with the phosphors poorly represented. Yellow pixels result in higher luminosity due to the additive color mixing , and therefore brightness , but due to the substance-related position of the green color points in the CIE diagram , a maximum of 60% color saturation is achieved. However, the chrominance reaches up to 80%, as a relative saturation compared to the spectral color of the same wavelength. Lemon yellow tones in particular appear “dirty” - as can be seen in the above color sample.

In color printing , yellow is used as the basic color of the CMYK color space ( Y from en: Yellow for yellow). The narrow color range is less unfavorable here, as the pigments that can be used for the process colors are coordinated with one another. However, the representation of the purest warm yellow tones is not possible in four-color printing. In the art print this calamity is solved with spot colors . The pigment selection, which is limited only by the printing properties, offers a richer color palette.

Yellow tones can be represented with optimal colorants up to a saturation of 95%. In the case of shades of blue, only 60% are possible with colorants. Subjectively, yellow appears as a light color.

While the red, green and blue areas appear neutral in the continuous spectrum , the yellow tones in the spectrum only cover a very narrow area in which they appear color-neutral . The selection of the “right” neutral yellow has long been a controversial issue among color theorists.

At the point where the stimulus response from the sensitive M and L cones is equally strong, the green and red impressions must be balanced in order to create the impression of yellow. The S-type (blue receptor) stimulus response is small, but not zero. It is noteworthy that the pure physiological visual apparatus is followed by a psychological and psychological adjustment up to perception. Depending on whether you take this aspect into account, a distinction is made between two basic neutral yellows.

Such differences cannot be shown on the screen. The yellow FFFF00 ( electric yellow ) corresponds, however, to a neutral yellow, whereby the right choice of phosphors can be beneficial or even a hindrance.

Most people find a slightly warm yellow to be “the typical yellow”, as can be observed for the Lab's counter-color, medium blue .

Until the discovery, production and use of cadmium yellow from 1825, a neutral yellow could not be represented in full force. In the printing industry, benzimidazolone yellow (PY151 brilliant yellow , PY154) is used primarily, especially diaryl yellow pigments , especially Pigment Yellow 12 and Pigment Yellow 13 . Chrome yellow (PY34), which is less colorful, has existed since 1797 . Zinc yellow , which is also a pale yellow shade, has been available since the end of the 19th century . All of these historical pigments are poisonous and are only used for artistic purposes.

Primary yellow lies exactly on the intersection of the L and M curves of a normal observer . According to the first Graßman's law, the hue results directly from the three primary valences R (700 nm), G (546.1 nm) and B (435.8 nm) defined by the CIE using the CIE tristimulus values. Ideally, because the (real) blue component is negligible, it is outside the human perception area at the Lab color angle H = 90 °

Primary yellow is by definition a visually neutral yellow, neither hot nor cold perceived is. Therefore, the term pure yellow is common for artists' colors .

Process yellow (also Optimalgelb , Pigmentgelb , English pigment yellow , printer's yellow ) is based on a (theoretical only) colorant that reflects red and green light equally and should absorb all blue . The name follows from the application as the basic color of the CMY color system as a colorimetrically neutral basic color.

Its Lab color value is approximately H = 97 °
In the color system according to DIN 6164 it has the reference value T = 1
PANTONE Process Yellow is a theoretical process yellow that is visually clearly greenish .

In Europe it is referred to as Euro Yellow because a different standardization is used. It is a bit greener. The color is achieved (primarily) by RAL 1016 sulfur yellow, as it is often used in rescue service vehicles.

The four-color color printing is based on the CMYK color model , with additional process black as the basic color (for color depth ). The three bright colors can be printed much lighter than the colorimetrically correct process yellow, process magenta and process cyan. PANTONE 803 refers to this color shade (in the original, this color should be seen on the color control strips ).

A sprig full of lemons

Shades between 575 nm primary yellow , including process and euro yellow , and 560 nm yellow-green are named after the peel of the lemon fruit or the yellow sulfur .

While there are pigments for the shades H = 90 ° to = 100 °, which are close to neutral yellow, there is no gap in the palette up to about H  = 135 ° phthalocyanine yellow-green in which there is no strong pigment. Very cool yellow tones must be mixed with suitable combinations of yellow and green or blue colorants.

Typical color names are in this range of nuances:

According to UNECE Regulation No. 37 the front headlights of motor vehicles were limited to white and yellow; in France yellow headlights were mandatory until 1993. The advantage was seen in the better recognition in poor visibility conditions. The standardized color for this was selective yellow . 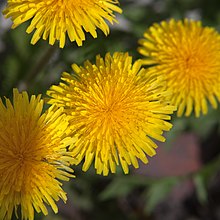 Red-tinged, warm yellows are called golden yellow or gold colors , intensely colored tones royal yellow , also sunflower yellow , yolk yellow and similar comparative trivial names are used. Just like solid gold (pigment), depending on the alloy component, is available in the variants yellow gold and red gold , this color group can be set with the spectral range from 575 nm to about 590 nm, in which the transition to yellow orange takes place.

A wide range of pigments and colorants are available for rendering golden yellow:

Other color names are: 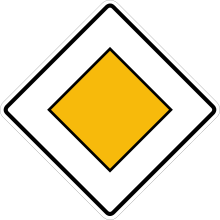 Yellow has a strong signaling effect and attracts attention. The yellow diamond of the right of way sign is one of the few German traffic signs with yellow components.

Markings according to EN and DIN :

Yellow in combination with black (in the sense of no-yellow) is a warning color in nature , which is probably based on the contrast between “light” and “not light”. This coloration is typical for poisonous animals - it signals potential predators: "No useful prey". Examples are bees , bumblebees , wasps or the fire salamander . Hoverflies or hornet swarms use the warning color for mimicry without being toxic themselves.

This signal effect also applies to humans: In combination with black, the greatest possible signal effect of two colors is generally achieved, with the strong yellow being particularly suitable. The “light color” of yellow is in contrast to the “dark” black. This color combination is used, for example, for hazard warning signs (such as high voltage) or the sign for the blind .

As a single color, red has the higher signal value, yellow is a preliminary stage. The three traffic light colors are used as follows: The middle phase shows the imminent change from green to red in a standardized way in European countries, and vice versa in some countries.

In sport (especially soccer ), yellow is a warning given to a player that does not yet lead to an immediate expulsion: yellow card .

World map with colors of post boxes for standard mail.
Help us to add the colors of the countries (shown here in gray) that are not yet available

Yellow is the color of many postal services, here a Swiss mailbox

The German Empire under Emperor Maximilian was dominated by the colors of yellow and black. The Thurn and Taxis adopted these colors to equip the uniforms of their post office holders: yellow jacket with black lapels. The Thurn und Taxis post office was thus equipped with the insignia of the empire and was recognizable as imperial courier mail. However, over time there have been different colors for the post. A wide variety of uniforms were made out for the post, depending on the country's color and the client. In Prussia they were dark blue with orange. It is interesting that the wagons of the post office - and later the railroad mail cars and motor vehicles - were mostly yellow. The reason was the signal effect of this color. The Allied Control Council decided in 1946 to introduce the color yellow for Germany as uniformly for the whole "institution Post". In Austria, yellow has been registered as a trademark for the delivery of various objects since 2003. The Swiss Post also uses yellow, as in its logo . The liberalization of the postal market necessarily brought other colors into play in order to distinguish oneself from the yellow postal system that had been inherited by the state: Green Post , Blue Post

Yellow often takes the place of the color of the metal gold . In this form it applies to coats of arms and flags, compare the state flag black-red- gold , which is represented with a strip of black, red and yellow fabric.

Internationally, yellow as a political color is mostly associated with liberalism and libertarianism. In Germany it is traditionally the color of the Free Democratic Party (Free Democrats, FDP). Yellow is also the official color of the Alliance of Liberals and Democrats for Europe (ALDE), as well as the liberal parties in Romania, Estonia and the United Kingdom of Great Britain and Northern Ireland ( Liberal Democrats ).

Yellow or gold, often along with blue or purple , is commonly used to represent liberalism . Yellow or gold was established as the color of liberalism as early as the 19th century. 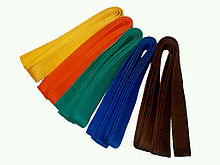 In heraldry (heraldry) the heraldic tincture gold , which is referred to as metal, can be replaced by yellow when painting coats of arms . See gold (color)

Describing the hue of objects