Swiss Post AG ( La Poste Suisse in French , La Posta Svizzera in Italian , La Posta Svizra in Romansh ; DIE POST , LA POSTE , LA POSTA , SWISS POST brand ) is the state-owned postal company in Switzerland . In 2019, it transported around 1.8 billion addressed letters, 148 million parcels, transported 167 million travelers and, with its subsidiary PostFinance AG, managed customer assets of over 119 billion Swiss francs . These tasks are handled with a workforce of almost 56,000 people, over 49,000 of them in Switzerland. This makes it one of the largest employers in Switzerland.

Three group companies are located under the umbrella of the Schweizerische Post AG group, which operate in four different markets.

The former parcel center in Zurich Mülligen, the first of the three mail centers, designed by the architect Theo Hotz

The Federal Post Office was created on January 1, 1849 to transport letters, parcels, people and money. From 1857 onwards, mail was transported by rail. Starting in 1866, the company's own rail mail cars were put into service. After motor vehicles were used for the first time in 1903 , the last horse mail in Avers GR ceased operations in 1961. From 1906 a postal check service existed ( current account , the forerunner of today's PostFinance ; yellow account ). In 1920 telephony and telegraphy were merged with the post office. The authority was now called PTT (Post, Telephone, Telegraph) . The yellow color has been the hallmark of Swiss Post since 1939. Since then, mailboxes and stamp machines have appeared in postal yellow . In 1964 the postcodes were introduced. In 1978 the PTT set up the first Postomats ( ATMs ) and offered the first Natels ( car telephones ) (cf. Swisscom ).

With technical progress at the beginning of the 20th century the telegraph and telephone were added. As a result, PTT companies were formed around the 1920s. Its origin is based on the merger in the Federal Telegraph Administration and the Oberpostdirektion on August 16, 1920, which were summarized in the PTT jurisdiction of October 24, 1930. As a result of this technical progress, the infrastructure had to be expanded in order to be able to guarantee economic development. In order to be able to build such an infrastructure (construction of pipes of any kind), land is required. However, since it is not always possible to build lines on public land, private land is also claimed. In order not to endanger this development, with the introduction of the civil code, the restriction of private property was justified and thus the right of expropriation was introduced.

On December 31, 1997, in connection with the liberalization initiated in 1988, the PTT was split into two groups. The postal services consisting of letter post, parcel post, payment transactions and passenger transport with Postbuses were transferred to today's Swiss Post, while Swisscom has been providing the telecommunications services since then.

From 1998 onwards, Swiss Post was an independent public service institution and has a certain amount of entrepreneurial freedom. The statutory basis was the Postal Organization Act (POG), which came into force on January 1, 1998.

Due to the new postal legislation that came into force at the end of 2012 (PG, POG, VPG on October 1, 2012, VPOG on December 1, 2012), Swiss Post was converted into a special law on June 26, 2013 with retroactive effect to January 1, 2013 Stock company converted. At the same time, PostFinance was spun off into a public limited company and placed under the supervision of FINMA. Swiss Post AG remains 100 percent owned by the federal government - now in the role of shareholder. PostFinance AG, in turn, remains fully owned by Swiss Post AG.

Swiss Post provides services for all aspects of sending addressed and unaddressed letters and advertising mail (see Direct Mail Company ), delivers newspapers, takes on document management for customers and is active in direct marketing . With SuisseID and the encrypted e-mail service IncaMail , Swiss Post offers products for online identity management, digital signatures and secure electronic communication. Together with SBB , Swiss Post operates the certification body for digital certificates SwissSign. To create and implement SwissID as a uniform digital identity , 17 companies from different business areas founded the sponsoring company “SwissSign Group AG” on March 5, 2018. The previous joint venture “SwissSign AG” of the Post and SBB was integrated into the group.

The demand for letter post services has been decreasing for a long time, with the volume of e-mail and SMS falling by around 4% annually. In response to this, Swiss Post restructured all of its letter processing from 2002 onwards. The REMA (Reengineering Mail Processing) project concentrated the logistics on three mail centers built between 2006 and 2009 in Zurich Mülligen, Härkingen and Eclépens. Together with six new regional distribution centers (so-called sub-centers) in Gossau ( SG ), Geneva, Basel, Tesin, Bern and Lucerne, the investment volume was around one billion Swiss francs.

At the end of 2017, the number of addressed letters was 4.2 percent below the previous year's level. The volume of newspapers delivered decreased by 2.9% due to changes in customer behavior. Payments processed at the counter fell by 6.5 percent. These deposits have decreased from 210 million in 2007 to 137 million in 2018. As a result, the fees were increased as of July 1, 2020.

In return, new services such as B. “Buur on Tour”, the clothing collection for Texaid and “Recycling at Home” for Nespresso launched.

Swiss Post continues to be the market leader in the letter mail sector in Switzerland.

The flagship of Swiss Post: the standardized yellow mailbox

In parcel and general cargo logistics, PostLogistics provides a range of services for business and private customers. In the courier, express and parcel market (CEP), Swiss Post is currently experiencing strong growth in the wake of the booming online trade (see also digital single market ). Swiss Post also handles customs clearance for cross-border shipments . At the end of November 2017, it became known that a cooperation agreement had been concluded for Amazon to enter the Swiss market . In future, Swiss Post will carry out customs clearance for Amazon. The tests with the logistics drones were suspended for the time being after the crash on January 25, 2019.

Since the beginning of 2017, all around 6300 two- and three-wheel delivery vehicles operated by Swiss Post have been battery-powered and run on green electricity . Electric vehicles require around six times less energy than a petrol scooter . Compared to before, Swiss Post saves 733 kg of CO 2 per vehicle and thus around 4,600 tons of CO 2 emissions in total every year . The first electric delivery vans went into operation in mid-2017 . Swiss Post plans to use up to 400 electric delivery vehicles by 2023.

Swiss Post has a 51 percent stake in the “notime” startup - a technology company offering bicycle courier services. “Notime” enables consignments to be delivered on the same day or within a few hours .

Swiss Post has been operating the “My Post 24” parcel machine system since November 2013 . After the online - registration can packages and registered letters placed directly at one of the approximately 140 machines are also accepted as.

Swiss Post started delivering regional food in the summer of 2015 .

Despite major international competition such as DHL and DPD , Swiss Post is still the market leader in the parcel market in Switzerland. In 2018, Swiss Post processed around 138 million parcels. This corresponds to an increase of over six percent compared to the previous year. In May 2019, 300 Migros branches were added to receive and send parcels. These were supplemented by a further 91 so-called service points in October 2019. At the same time, it was announced that the cooperation with SBB regarding package services will end on March 31, 2020. 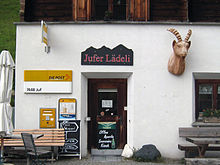 Post office in Juf , the highest village in Europe

Starting in 2020, customers who frank their parcels online themselves will be granted a discount. Parcel shipments have increased massively since the COVID-19 pandemic , so that the enormous amount can hardly be processed. 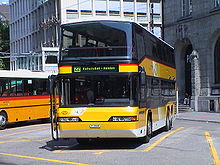 PostBus AG is the largest Swiss service provider in public road transport and to a large extent ensures the connection of peripheral areas to the centers. Around 155 million passengers travel with PostBus AG every year. In addition to public transport, PostBus also transports school children.

Together with SBB and Rent-a-Bike, Swiss Post has set up a public bike rental network. PubliBike has an extensive network of rental stations in Switzerland, where either conventional or e-bikes can be rented for a fee.

The PostFinance AG provides financial services for payments, savings accounts and investment business. The retail financial institution has had a banking license since June 26, 2013 and is subject to the supervision of FINMA .

With the FINMA submission, PostFinance AG has the opportunity to independently offer products for which it previously had to enter into cooperation with banks. On the other hand, PostFinance is still not able to grant loans and mortgages independently under the Postal Organization Act. She continues to work with other banks in this area. PostFinance AG maintains its own debit card system, the PostFinance Card , which is known colloquially as Postcard and is widely used as a cashless payment method in Switzerland.

With over 2.9 million customers and over 100 billion Swiss francs in customer assets, PostFinance AG is one of the largest financial institutions in Switzerland. It is the undisputed market leader in payment transactions in Switzerland. Despite the digitalization of payment transactions, around 200 million payments were made at the post office counter in 2019, for which Swiss Post has been offering the “ yellow booklet ” since 1910 .

The PostVenture innovation program resulted in Sonect, an app that enables free cash withdrawals at the point of sale , e.g. B. at Valora and Volg .

Swiss Post is also active outside of Switzerland. PostBus operates the entire regional transport network in the Principality of Liechtenstein. Swiss Post Solutions (SPS) has international subsidiaries and employs almost 7,000 people in 15 countries worldwide. The subsidiary is a full-service provider in the field of digital and physical document management. The core markets are Switzerland, Germany, Great Britain, the USA, Southern / Western Europe and Asia. SPS Vietnam collects data, processes digital documents and takes over IT operating services. Swiss Post and French La Poste each have a 50 percent stake in the Asendia joint venture . Asendia's business activities include all solutions in the international mail business.

Swiss Post offers are an emotional issue among the population. As a federally owned company, Swiss Post is obliged to provide a nationwide basic supply of postal services and payment transactions. At the same time, in accordance with the strategic goals of the Federal Council, it should offer high-quality, marketable and innovative services and generate profitable growth as well as strengthen the company's profitability by increasing efficiency. In this area of ​​tension, Swiss Post is always the focus of public and political discussions.

Closing or converting post offices into more modern formats such as the post agency or home delivery service is often viewed with skepticism by the public. From Swiss Post's point of view, these new post offices are largely rated positively by customers after initial experience with the new formats and adjusted opening times. Price adjustments for individual products also repeatedly lead to criticism.

Finally, necessary restructuring and cost measures with personnel consequences each made negative headlines. Swiss Post is in close contact with the syndicom and transfair trade unions (staff association) .

The criticism of the Post has so far resulted in two popular initiatives. The “Postal Services for All” initiative, which wanted to anchor a nationwide network of post offices and a deficit guarantee in the federal constitution, was very narrowly rejected in September 2004. The “Initiative for more public service” came into being in June 2013. The proposal was voted on on June 5, 2016. The initiative was rejected with 67.6% of the vote.

Parliamentary initiatives on postal issues are repeatedly launched at cantonal and federal level. With the new postal legislation, which came into force at the end of 2012, Swiss Post has clear framework conditions for fulfilling its basic service mandate.

In 2019 McKinsey was commissioned to check the efficiency of the work processes.